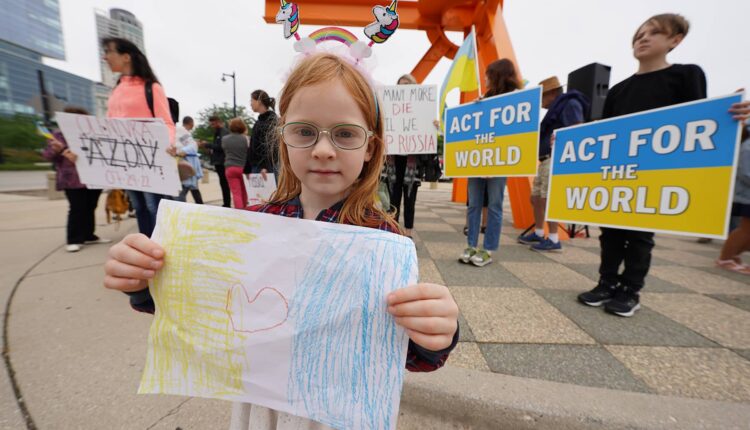 Ukraine celebrates its Independence Day on August 24, in commemoration of the Declaration of Independence of 1991. It also marks six months since the unprovoked full-scale invasion by Russia began on February 24.

Milwaukee’s Ukrainian community held a rally downtown on August 14, by the orange sunburst near the lakefront. Dozens gathered to remind the local public that Russia’s brutal war against their homeland continues, and each day brings more destroyed cities and the death of innocent civilians.

“We understand that as people are enjoying their summer, and getting ready to send their children back to school, the war in Ukraine has faded from their thoughts,” said Halyna Salapata, one of the rally organizers. “We have the privilege to be distracted with daily life, while our family and friends in Ukraine endure harsh conditions. So as Ukrainians living in Milwaukee, we wanted to rally in support of Ukraine, Ukrainian prisoners of war, residents of occupied territories, and front-line cities.”

As a board member of the nonprofit group Wisconsin Ukrainians, Salapata has spent the past six months raising funds and collecting supplies to help with the war effort. She said that the August 14 gathering was also a protest against Russia’s terrorist actions, and a protest against global inaction, in order to draw the world’s attention to the methodical extermination of Ukrainians by Russia.

Karina Tweedell, a volunteer with Wisconsin Ukrainians and a community leader in Milwaukee who also helped organize the rally, spoke about the war and its impact in Milwaukee.

“I am from Donetsk, Ukraine. I appreciate all of you who took the time to come out today. Our pretense that everything is normal, our silence in the face of continued atrocities by Russia is only benefiting the aggressor, the Russian state.

It’s been almost 6 months since the start of Russia’s full scale invasion in Ukraine. It’s been over 8 years since Russian troops entered the Donbas region, where my hometown is located. We are here to remind the world that the war in Ukraine is still raging on, which in itself is evidence that the Russian state and its people have not sufficiently felt the outside pressure for Russia to stop their attacks.

In the time since the war in 2014, there were 10 EU states who continued selling their military equipment to Russia despite an embargo prohibiting that. The EU closed the loophole for the arms sales to Russia only after public disclosure. We cannot go on with business as usual while Russia is decimating Ukrainian cities. We owe it to the thousands who perished in this senseless war. If Russia is not feeling the pressure of the existing sanctions to stop their aggression, we clearly need to do more.

We’re all tired of processing the heart wrenching news of the war in Ukraine, but so are our relatives and friends experiencing this war first hand. What Russia is doing right now in Ukraine goes against the principle of any civil society. If hundreds of documented war crimes, torture and the deliberate killings of civilians does not get Russia to be labeled as a state sponsor of terrorism, I don’t what will.

On July 29, dozens of Ukrainian POWs were killed in a detention center in Olenivka. Just hours after Kyiv and Moscow signed an agreement to allow wheat and corn exports from Ukraine, Russia shelled the Ukrainian port.

The arrival of some western made weapons is making a difference, and Ukraine continues needing those weapons to survive. To those who preach “no war” and stop the conflict now, I say that the outcome of this war makes a real difference.

What kind of world would we live in if during WWII our predecessors did not fight back against the Nazis? The only way the war will stop is when Ukraine, with the help of the rest of the world, defeats Russia.

Ukraine has been a free and independent nation for 31 years, and its prosperity has been a continued threat to the repressive regime of Russia’s dictator. Rally organizers urged the Milwaukee public to continue sending help to Ukraine, to prevent Putin from annexing the nation. Wisconsin Ukrainians has collected close to $400,000 in funds, and sent more than 160,000 pounds of medical supplies and humanitarian aid for distribution across Ukraine.