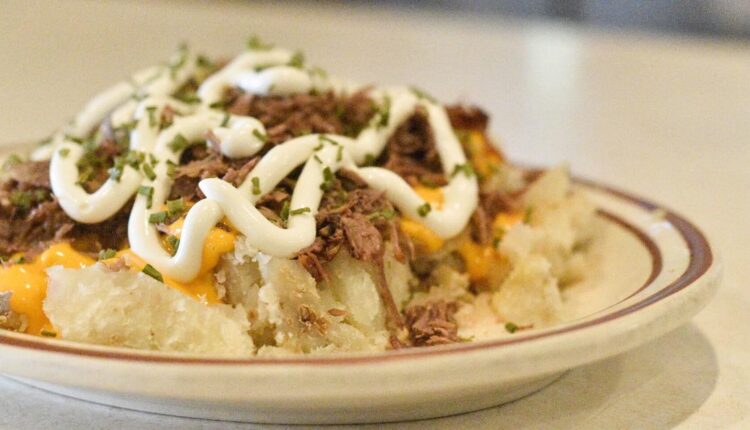 RACINE — More than a year after a fire forced his Super Steak & Lemonade location in Racine to shut down, Taysir Mustafa is bringing his menu of cheesesteaks, loaded nachos and lemonade slushies back to town, with the help of a familiar face.

A one-pound burger is offered at Chubbie’s, 619 High St. Chubbie’s also has a 5-pound version, which is offered as an eating challenge.

Mustafa has teamed up with Marwin “Mike” Otallah, the new owner of Chubbie’s Pizzeria & Sandwich Shop, 619 High St., to bring his fan-pleasing food onto the menu of the home of the 5-pound burger. Otallah took over ownership of Chubbie’s from his uncle, Nimer Musaitifs, earlier this year.

Otallah and Mustafa have known each other for a long time, Otallah said.

“We’re almost like family you know, everybody in the community knows each other,” Otallah said. “A lot of customers were asking (Mustafa), ‘When are you going to reopen?’ We figured since the building isn’t available, we can partner and do something here.”

The new menu will feature all of the favorites people have come to know for Chubbie’s, from the pizzas to the massive, challenge-worthy 5-pound burgers, but will include some of the selections from Super Steak, one of which being the “super baked potato,” a reinvention of the classic dish with a smashed baked potato topped with a choice of meat, nacho cheese, sour cream and chives.

One of the new menu items from Super Steak and Lemonade offered at Chubbie’s, 619 High Street, is the loaded baked potato. It includes a baked potato, a choice of meat, nacho cheese, sour cream and chives.

A fried chicken platter, from the menu of Super Steak and Lemonade, has been added to Chubbie’s new menu.

Other new inclusions are whole chicken wings and loaded nachos made with Doritos chips. Mustafa also wants to be bringing more southern-style foods like hushpuppies, fried okra and seafood options to the menu.

“We had cod and catfish before, but he’s bringing the catfish steak and the catfish nuggets,” Otallah said.

Philly cheesesteak sandwiches from Super Steak will be joining the Chubbie’s menu, with different meat options like steak, chicken and even gyro meat. Super Steak will also be bringing in the other staple of the namesake, the lemonade. Handmade fresh lemonade slushies will also be a part of the menu, coming in various flavors including classic lemon, strawberry and cherry.

Firefighters battle a blaze from outside Super Steak & Lemonade, 1601 Taylor Ave., with water on the morning of Friday, April 23, 2021.


Otallah and Mustafa hope the inclusion of Super Steak items to the Chubbie’s menu will bring along a surge in patronage from the fans of the former south side restaurant that have missed the place since the fire that shut down the restaurant April 23, 2021.

“Mainly here I think we’re going to have more carryout and deliveries,” Otallah said. “Once the customers know that he is back in town, they are going to just try it again. They’ll come back, and they can eat here, but I think most customers from the south side will just order deliveries, and he do have delivery available for that.”

To accommodate for the new menu and increasing demand, Chubbie’s is hiring more staff, including former employees of Super Steak and Lemonade. Mustafa will be helming the kitchen at Chubbie’s.

A slice of New York style cheesecake is offered at Chubbies, 619 High St

Otallah’s favorite thing from his friend’s menu is his gyros.

Mustafa currently owns two other Super Steak locations outside of Racine County: one in Kenosha and the other in Milwaukee.

In photos and video: The Depot and Raymond School’s 2021 food drive

A box from the Racine County Food Bank stands outside the Depot Tavern and Restaurant on Highway G near the train tracks, where a Canadian-Pacific train is seen cruising through on Saturday. The CP Holiday Train made its first and only stop at the Caledonia tracks in 2019 after Depot owner Sue Gracyalny rallied for a stop, gathering food and monetary donations. It did not return in 2020, and will not return again to any stops in 2021 due to the ongoing COVID-19 pandemic.

Food drive at the Depot

From left, in back: Rayne Kleinofen and Ashley Rodriguez, dressed up as characters from the Fairytale Birthday Company in Franksville; and Madi Long, Miss American Junior Model Teen 2021. From left, in front: Tali Heller, Mini Herb Princess; other Ava Pinnow, America’s Little Miss. The group was seen outside the Depot Restaurant and Tavern on Saturday, Nov. 27, encouraging donations for the food drive.

Noah Childers, Raymond School fourth grader, leads the way as other students haul out boxes for the Racine County Food Bank on Tuesday.

That’s a lot of stuffing

Raymond School students deliver boxes of food from the hallways to the Racine County Food Bank truck on Tuesday.