That Wisconsin football buzz? Chris McIntosh feels it, too 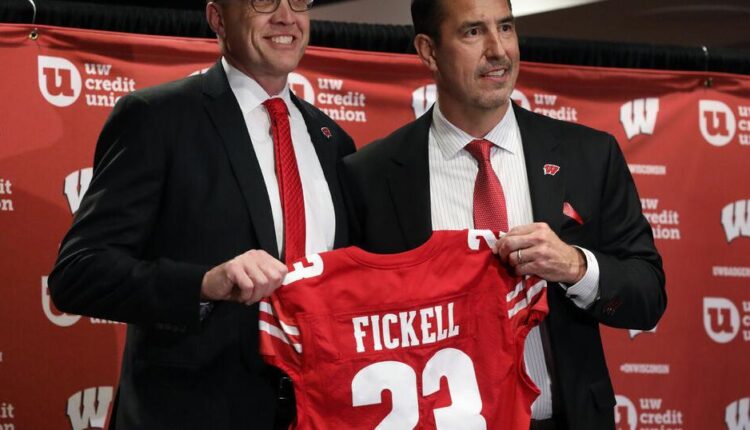 Chris McIntosh offered a reminder earlier this week of two things he said in formal settings, one a while back and another more recently.

McIntosh officially took over as the University of Wisconsin athletic director in July 2021 and, at his introductory news conference, he promised the athletic department would stay true to its values ​​while also evolving to the changing world around it.

His prepared remarks during another landmark moment 18 months into his tenure — the hiring of Luke Fickell as football coach last November — included McIntosh stressing the need to give the fan base reasons to get excited.

McIntosh brought up those bullet points when asked about how much the football program has changed in a span of eight weeks since Fickell took over. The Badgers have landed one of the best transfer crops in the nation, securing 13 players through the portal, while building a brand on the recruiting trail.

UW last week put up 10 billboards in Wisconsin and another in Chicago during a blitz of those areas that included sending Fickell and 10 staffers on the road to get to as many high schools as they could in one day. The total cost of the billboards was just over $7,000 — a reasonable way to spend money, if you ask me — and just as noteworthy was how active Fickell and the Badgers were on social media to advertise this blitz.

The buzz generated that Friday was a continuation of something that’s been building since Nov. 27, when McIntosh made a bold move by passing up program icon Jim Leonhard to hire Fickell instead.

It’s been a long time since there was this much excitement around a program that, despite being in the midst of a 21-year bowl streak, needed an injection of energy.

So many people inside and outside UW have described Fickell’s arrival as a “breath of fresh air” that I’ve lost count.

McIntosh hasn’t revealed a whole lot about the search process that resulted in Fickell’s hire, and he said earlier this week that’s not likely to change. He has the desire to look forward, not back, and that makes sense even though it would be nice to know a little bit more about his approach to the biggest decision of his relatively short time on the job.

But McIntosh did open that door slightly when asked about the Badgers’ seismic shift on offense, where new coordinator Phil Longo will run a version of the Air Raid.

McIntosh admitted that finding a new approach to offense was a significant priority as he went about finding a new leader for a program that hasn’t won a Big Ten championship in 11 years.

His background is important to remember: This is a guy who was a former All-American offensive lineman at UW, a two-time captain on teams that won back-to-back Rose Bowls, so you can imagine his frustration when he surveyed the situation Saturday after Saturday from his suite and came to the conclusion that the odds were stacked against the Badgers’ once-dominant running game.

Open Jim: Does Wisconsin basketball coach Greg Gard get too much grief?

McIntosh — just like Fickell and Longo have done — is quick to point out that the Badgers won’t abandon the run while switching to an offense with a name that could imply an air-it-out philosophy.

The scoreboard is what matters most, and we won’t begin finding out those results for another seven-plus months, but the immediate results have been nothing short of remarkable. UW landed three transfer quarterbacks in the portal, each of them regarded as four-star prospects coming out of high school, along with four wide receivers.

It’d be silly to suggest this was all part of some master plan for McIntosh, but he has been a man of his word in at least two ways:

It seems as though UW has evolved to the changing world around it. It’s certainly given its fan base legitimate reason to hope and dream about a bright future.

Alternate jerseys have become more and more popular in sports, but they can be a nightmare for fans who are color blind.

The hate mail (well, hate tweets) poured in from Iowa fans after this column was published. UW didn’t want it written, either.

Marisa Moseley was in a dark place early in her coaching career, a story that we both felt was important for people to hear.

I went to Jim Leonhard’s hometown in 2002 to learn more about a rising star in the UW program. Twenty years later, I went back.

Brent Moss and Terrell Fletcher formed a dynamic 1-2 punch in the 1990s, but there was a wedge between them off the field. A phone call years…

Wisconsin Republicans aim to kill off government with their flat tax