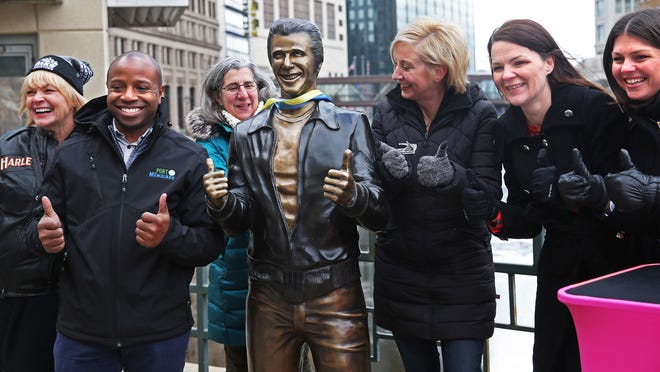 Milwaukee is whole again. Well, at least the Riverwalk is.

The Bronze Fonz has returned to the Riverwalk after a nearly 40-day absence.

Visit Milwaukee hosted an unveiling ceremony on a chilly Friday afternoon to reveal the Fonz’s new look to the public.

A number of business and government leaders spoke at the event, including Acting Mayor Cavalier Johnson.

“When we removed The Bronze Fonz for routine maintenance, on a Tuesday afternoon in February, we had no idea the stir it would cause throughout the city,” said Peggy Williams-Smith, president and CEO of Visit Milwaukee.

Williams-Smith said Visit Milwaukee received a number of inquiries after local media outlets, such as the Journal Sentinel, asked “Where is ‘The Bronze Fonz’ statue?”

Sabourin drove Winkler around Milwaukee when Winkler was in town for the original 2008 unveiling ceremony.

“I hauled him around in 2008 in my ’51 Ford convertible, and he was one of the nicest persons I could ever meet,” Sabourin said.

Sabourin said he received a thank you letter from Winkler a couple days after Winkler left town. “I got a beautiful letter two days later, saying how nice Milwaukee was and how nice the people were and how nice we were. We enjoyed it very much.”

Sabourin added that The Bronze Fonz is important because it reminds people of “Happy Days,” the TV show and in a literal sense. “Rock ‘n’ roll music and the ’50s, those were the good days and everybody loved the music, and everybody loved ‘Happy Days’ … (Winkler) loved Milwaukee.”

Johnson spoke briefly about the image and perception of The Bronze Fonz, which led to dissension in the Milwaukee Arts scene in 2008.

Journal Sentinel art critic Mary Louise Schumacher wrote in 2008 that the Milwaukee Art Museum director had come out against the statue. Two gallery owners were so adamantly opposed to The Bronze Fonz that they claimed they would close down their galleries if the planning went through.

The sound of a synchronized gasp and then round of applause left the Riverwalk on Friday once the white sheet was pulled off The Bronze Fonz. Beth Sahagian-Allsopp, co-owner of Vanguard Sculpture Services, where the Fonz was being restored the last month or so, placed a ribbon around the Fonz in the national colors of Ukraine.

The statue has a certain glow to it now, it is truly bronze throughout with varying shades of bronze. His T-shirt is bronze but lighter than his leather jacket and his jeans are almost a golden bronze. The bright blue jeans are gone.

Now, The Bronze Fonz will stand at his spot giving his signature double thumbs up for “years to come,” Williams-Smith said.

Listen: What We’ve Learned After Two Years of the Pandemic