The Green Bay Packers’ Defense Has Let Down The Entire Organization 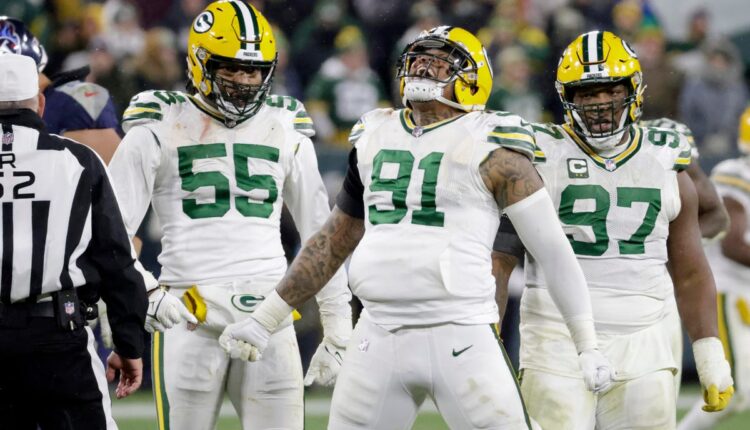 The Green Bay Packers’ defense expected to be one of the NFL’s elite units in 2022. That hasn’t come … [+] close to happening.

Both teams planned to lean heavily on their defense — units that the 49ers and Packers each invested heavily in and expected big-time results.

“It’s going to be scary,” Packers outside linebacker Rashan Gary said of the Packers’ defense back in June.

Well, one of the highly-acclaimed defenses has been nasty in 2022, and it isn’t Green Bay’s.

The 49ers’ defense has been everything it was billed to be — and then some — which is why San Francisco (10-4) has ripped off seven straight wins, clinched the NFC West last week and is a legitimate threat to win the NFC. During the 49ers’ current winning streak, they’ve allowed just 9.6 points per game.

On the flip side, the Packers’ defense has been an enormous disappointment and is a huge reason Green Bay is 5-8. Barring a remarkable reversal of fortune, defensive coordinator Joe Barry could be down to his final four games with the team.

Barry was recently asked what’s gone wrong. Not surprisingly, he was stumped by the question.

“I wish I knew,” Barry said on Dec. 1. “I’ve stayed up many nights thinking about that and I wish it was one specific thing that I could put my finger on.”

There are plenty. And that in itself is an indictment of Barry, who began the year with six first round draft picks in his starting lineup and seven first rounders on the roster.

The franchise’s worst finish in yards allowed per carry came in 2002, when the Packers allowed 4.84 yards per rush. And since 1970, just 28 teams have allowed 5.0 yards per carry over a full season.

The Packers have given up at least 100 yards in 11 of 13 games. And the bottom fell out in Philadelphia on Nov. 27 when the Eagles ran for a mind-blowing 363 yards. Only twice in team history has an opponent run for more yards against a Green Bay defense.

At the heart of the matter is one of the NFL’s poorest tackling teams. In Green Bay’s loss to the Eagles, the Packers had more than 20 missed tackles.

That hasn’t come close to happening, though.

The Packers entered Week 15 ranked 26th in the league with just 1.8 sacks per game. That puts Green Bay on pace to finish with 31 sacks, which would be its lowest number since the 2011 campaign.

The Packers talked throughout training camp about having the NFL’s best secondary. And it was tough to argue.

Jaire Alexander became the NFL’s highest-paid cornerback in the 2022 offseason. Promising Eric Stokes and reclamation project Rasul Douglas were supposed to give Green Bay one of the top cornerback trios in football.

Safeties Adrian Amos and Darnell Savage had the potential to be one of the better duos in football.

“We’ve got all the pieces,” Alexander said.

Instead, Alexander had been up and down. Douglas hasn’t played to his 2021 level, Savage was benched and Stokes was placed on injured reserve after Week 9 with ankle and knee injuries.

While the secondary has still been respectable, it hasn’t come close to reaching expectations.

Add it all up and the Packers have been the picture of mediocrity.

Meanwhile, Green Bay’s offense has picked up steam — just like the Packers anticipated it would during training camp.

Green Bay is averaging 27.3 points per game in its last four contests. In the Packers’ first four games, they averaged 17.1 points per contest.

Had Green Bay’s defense been up to the challenge of holding the fort early on while the offense gained steam, this season could have gone much differently.

In San Francisco, the 49ers have perfectly executed the same plan Green Bay was hoping to fulfill — despite the fact the offense was thrown several curveballs.

San Francisco lost its top two quarterbacks Trey Lance and Jimmy Garoppolo to season-ending injuries. Elijah Mitchell — the 49ers’ No. 1 running back coming out of camp — suffered a sprained MCL in Week 1 and missed eight weeks.

The 49ers’ defense has been so good — the type of dominant unit Green Bay thought it had — that San Francisco hasn’t missed a beat.

Of course it helped that the 49ers traded for all-world running Christian McCaffrey after Mitchell’s injury. And few could have predicted that third string quarterback Brock Purdy would perform every bit as well as Lance and Garoppolo — if not better.

But the one constant all year long has been the defense.

The term ‘dominant defense’ was made for these 49ers. The term ‘Depressing Defense’ fits Green Bay.

The 49ers’ 11 preferred starters on defense count $71.2 million against the salary cap. Green Bay’s count $63.0 million, so both teams involved comparable amounts to that side of the ball.

In San Francisco, several players are having Pro Bowl caliber years, led by Nick Bosa, Fred Warner, Dre Greenlaw, Talanoa Hufanga, Samson Ebukam and Charvarius Ward. In Green Bay, the only defensive player with any hope of the Pro Bowl is Alexander.

Everyone has a plan in September of how they can still be playing come late January or February. The Packers and 49ers had similar ideas.

San Francisco executed its strategy to perfection and is in position to make a run at the sixth Super Bowl in franchise history. Green Bay’s blueprint for success never materialized, which could lead to massive changes this offseason.

A guide to 2022 light displays in Kenosha County