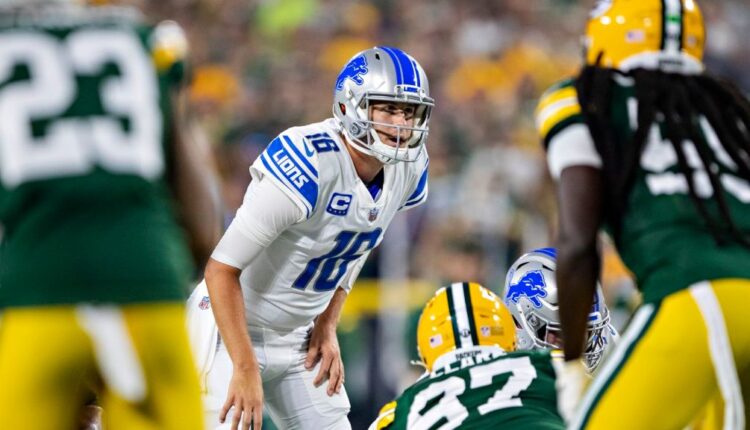 Week 18 is upon us, and for the Detroit Lions, that means a divisional date with destiny at Lambeau Field. The 8-8 Lions battle the 8-8 Green Bay Packers on Sunday Night Football, arguably the biggest Lions game in years. Detroit does not control its playoff destiny; they need help from the Los Angeles Rams and then must defeat the Packers. A Seattle Seahawks win would eliminate Detroit from playoff contention; nevertheless, an opportunity to sweep the Packers and win at Lambeau Field is priceless. Here are three keys to victory for Dan Campbell’s team.

Mesh the run and pass

Last week, the Lions played a near-perfect offensive game. Detroit posted 41 points, Jared Goff threw for 255 yards, and the Lions rushed for 265 yards. Detroit married the run-and-pass games to devastating effect. The Lions play out of 11-personnel 85% of the time, and they can run and pass efficiently in this formation. Offensive coordinator Ben Johnson has created a diverse offense capable of puncturing opposing defenses. The Lions lead the NFL in success rate on play-action passes and are third in dropback-EPA. Living in 11-person forces defenses to stay in base on early downs, and the Lions have to get the ground game going in this one.

Football Outsiders rank the Packers 31st in run-defense DVOA. The Packers are another light-box team, and if Detroit gets loose on the ground, it will open a Pandora’s box of possibilities. With a wideout group consisting of DJ Chark, Josh Reynolds, Amon-Ra St. Brown, and Jameson Williams, the Lions possess legitimate weapons. Goff distributed the ball to 11 players last Sunday, and many of his passes came out of run-formations the Lions used earlier in the game. The Packers’ secondary is its strength. If the Lions can layer in throws between the linebackers and secondary with a threatening run game, they will be in business.

Defensive Front Seven Must Turn Up

The Lions’ secondary will almost certainly give up chunk plays in this game. They are an inexperienced unit dealing with injuries. That puts more pressure on the defensive front seven, and they will need to play their best game of the season. Green Bay’s running back duo of Aaron Jones and AJ Dillon have played excellently over the last four weeks. Defensive coordinator Aaron Glenn emphasized the importance of stopping Jones and Dillon. In the reverse matchup at Ford Field, the Lions restricted Jones to 25 rushing yards. The lack of a running game forced Green Bay into passing over 35 times. Rookies Aidan Hutchinson, Josh Paschal, James Houston, and Malcolm Rodriguez must play a mature game. While veteran linebacker Alex Anzalone will hold the key, Detroit will rely on his experience and athleticism. The green-dot wearer has to manage the youngsters around him and trigger downhill when required.

Stay Ice Cool on the Tundra

The Lions are one of the youngest teams in the NFL. They are inexperienced. Outside of Jared Goff, Josh Reynolds, Alex Anzalone, and DeShon Elliott, many of these Lions have minimal big-game experience. Several young players have spoken about how excited they are to play live on NBC’s Sunday Night Football. That excitement cannot spill over into ill-discipline or reckless football. Controlled aggression is the requirement. The Packers are used to playing in prime time in pressure situations. The Lions are not. It will be a night for calm heads and staying the course. The experience of Dan Campbell and coaches like Duce Staley and Antwaan Randle El is paramount. The outdoor, wintry conditions will take Detroit out of its comfort zone. The raucous home atmosphere could overawe Detroit’s young players. Staying ice cool and emotionless may be the essential key in this game.