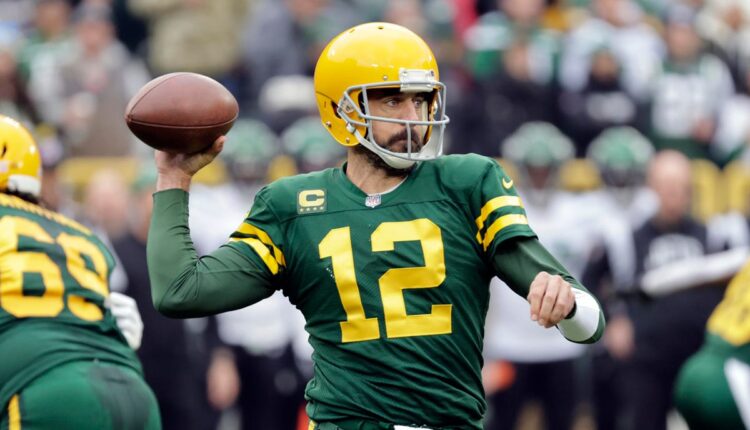 Green Bay Packers quarterback Aaron Rodgers could use another weapon or two at wide receiver.

On Nov. 19, 1996, the Green Bay Packers went to Dallas, couldn’t find the end zone and dropped a 21-6 decision to the defending Super Bowl champion Cowboys.

Two months later, those Packers won the 31st Super Bowl with Freeman and Rison as their starting receivers.

Today, the Packers are in a similar pinch.

Green Bay played without Sammy Watkins (hamstring) and Christian Watson (hamstring) in its 27-10 loss to the New York Jets Sunday. Then during the game, the Packers lost Randall Cobb to an ankle injury that could be serious.

“Certainly it hurts our offense when he’s not out there,” Packers coach Matt LaFleur said of Cobb. “I hope he’s all right, but I don’t know.”

Green Bay’s wide receiver room was already mediocre, at best, when the season began after it traded away Davante Adams. Now, the Packers are razor thin.

That means it’s time for general manager Brian Gutekunst to trade for a receiver as soon as possible.

The NFL’s trading deadline is Nov. 1, but Gutekunst should get busy as soon as possible.

The Packers have lost two straight games, are 3-3 and need as much time as possible to get their struggling offense fixed. The longer a new wideout would have to develop chemistry with quarterback Aaron Rodgers, the better.

Here are three wideouts who could make sense for Green Bay — both on the field and financially.

The Steelers are in a mini-rebuild in the post-Ben Roethlisberger era. And Claypool could be had for the right price.

Claypool had 121 receptions, 1,733 yards and 11 touchdowns his first two years in the league. But his numbers have dropped significantly (23-225-1) with Kenny Pickett and Mitch Trubisky under center this year.

Pittsburgh extended the contract of wideout Diontae Johnson last summer, then took receivers George Pickens in the second round and Calvin Austin III in the fourth this spring.

Claypoool, who’s in year three of his four-year rookie deal, has a base salary of just $1.1 million this year. So Green Bay — which is $8.03 million under the cap according to Spotrac — would have plenty of room to add Claypool.

The Patriots have won two straight games, improved to 3-3 and have a soft schedule coming. But if Bill Belichick decides to be a seller at the deadline, Meyers would have value.

Meyers signed a one-year, $3,986 million deal with New England this season, but will become a free agent after the year ends. So if the Patriots don’t see him in their long-term plans, they could move him now and get back draft capital.

The Panthers will be in full rebuild mode this offseason, following the recent firing of coach Matt Rhule. And Anderson is on the outs with the organization after being sent to the locker room Sunday following an argument with his position coach.

Anderson is a talented player who had 95 catches for nearly 1,100 yards just two seasons ago.

Anderson’s base salary is just $1.03 million, which makes him attractive to teams.

Community update from the Kenosha Vocational Ministry: A season of opportunity