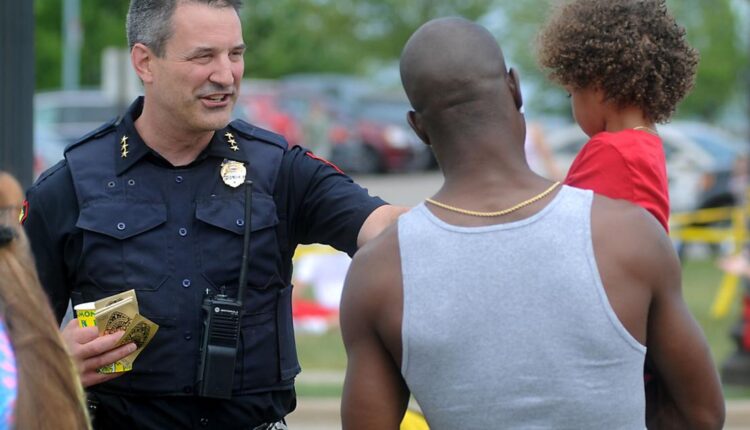 At the end of December, Kenosha Interim Police Chief Eric Larsen is expected to retire.

But it won’t be before he receives a promotion, if in title only.

Mayor John Antaramian has recommended Larsen retire as the city’s top law enforcement officer, recommending to the Police and Fire Commission that the “interim” moniker be changed to police chief during its Tuesday meeting.

“Eric has done a wonderful job for us and he was kind enough to put off his retirement to stay a little longer so we would have time to go through our processes and everything else,” Antaramian said Sunday.

According to correspondence with the Commission and its President Richard Gallo, Larsen agreed to accept the position as interim chief on May 21, 2021, following the retirement of then-Chief Daniel Miskinis. Naming Larsen the interim chief would enable the commission to search for a permanent replacement.

Larsen had originally planned to retire on Dec. 31, 2021, and had indicated he would not be a candidate for the chief’s job.

“And so, what we’ve done is we removed the interim status he has. So, as he retires, he will be the chief,” he said.

Antaramian said that the city was rebuilding from the riots that came about following the police shooting of Jacob Blake in 2020. He said the police department “needed and wanted stability during this time.”

“Chief Larsen provided that leadership and realized that making that change, and to make an impact was definitely a challenge,” the mayor said.

Antaramian said Larsen, as interim chief, could have retired last year, but realized “the need to create stability for the officers he was leading, while also adding a fresh perspective.”

Larsen, after speaking with his family, agreed to remain another year.

The mayor said Larsen continues to provide direction to officers on the importance of police-community relationships and meets regularly with the community.

In his nearly two years since he was asked to lead the department, Larsen has looked to improve relations between police and the public, which has included meeting with grassroots organizers and community activists. Those meetings have led to the formation of the Kenosha Coalition Organization Resolution, which uses an “interrupters” model to mediate disputes in Kenosha neighborhoods, to fight systematic racism, and to reduce community violence.

Last year, the department, under Larsen’s watch, created the Special Investigation Unit made up of former gang unit and drug investigation officers who focus on combating violent crimes and gun crimes.

Larsen has also led the department during hiring challenges as retired officers. In the spring, voters approved a public safety referendum that will allow the city to increase its levy by $2.5 million, a move that will enable the department to hire 10 police officers and six firefighters.

Kenosha Police Department interim Chief Eric Larsen discusses the role of police officers during the deadly fire on Jan. 17 2022 at occurred at Saxony Manor, 1870 22nd Ave. The fire killed two people, while investigators discovered the body of a third person who had died of other causes. Fire officials are still looking to determine the cause and origin of the fire.

Larsen could not be reached for comment on Sunday. The popular chief, however, has no plans to change his mind and stay past the end of December, the mayor said.

“I wish I could tell you differently, but no,” said Antaramian. “He would’ve made a wonderful long-term chief if he decided to stay. Sorry to see the chief go. He’s been wonderful.”

In the meantime, Antaramian said the commission continues the process for hiring a new chief. A closed session is also on the commission’s agenda for Tuesday to discuss an update on the status of the search.

“They’re still working through the process,” he said.

IN PHOTOS AND VIDEO: Kenosha Police Shop with a Cop event

SHOP WITH A COP

Ciniya Wells, in fifth grade, center, shops for books with Sgt. David Cooper, left, and her teacher Samantha Tibor during the Shop with a Cop event with the Kenosha Police Department at Meijer on Saturday.

Allison Cody, in third grade, left, points to an isle as she goes over her holiday shopping list with Officer James Rockweiler during the Shop with a Cop event with the Kenosha Police Department at Meijer on Saturday.

Lt. Joseph Nosalik gets into the spirit during the Shop with a Cop event with the Kenosha Police Department at Meijer on Saturday.

Jessica Campbell, in third grade, front, gets help picking out a toy from Officer November Keaskowski during the Shop with a Cop event with the Kenosha Police Department at Meijer on Saturday.

Zavio Johnson, in first grade, picks out action figures with help from Officer Nikki Megerle during the Shop with a Cop event with the Kenosha Police Department at Meijer on Saturday.

Adonis Washington, in fourth grade, center, learns how to use Officer Brandie Valeri’s camera as his uncle Jeffery Washington looks on during the Shop with a Cop event with the Kenosha Police Department at Meijer on Saturday.