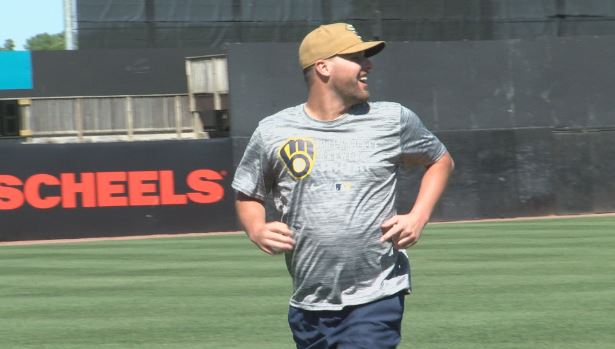 APPLETON, Wis. (WFRV) – Timber Rattlers pitcher Tyler Gillies never expected his life to take this turn. But after discovering he had Hodkin’s Lymphoma and the subsequent battle he went through defeating the disease, he’s more thankful for the support he got than anything else.

“Both the Brewers and the Wisconsin Timber Rattlers were just amazing with the whole thing,” Gillies said with a grin. “The Brewers, kept in touch with me the entire time I was going through things and the Timber Rattlers have been amazing from the start. I’m really proud to see them host the Hope at Bat initiative and I’m just excited.”

The Hope at Bat initiative is something Minor and Major League Baseball started in order to help raise cancer awareness and funds for cancer research. The Timber Rattlers were asked to be the team to kick off the start of the program knowing how supportive they were of a member of their own organization when he was going through his own battle.

“I don’t think we have to necessarily educate anyone on cancer, but it’s about raising funds and as Tyler has even said, 30 years ago, the type of cancer he had was death sentence,” President and CEO of Third Base Ventures Rob Zerjav said. “But because of research, because of dollars that were raised, and the ability to find cures, find treatments, there’s a reason he’s playing baseball now.”

For Tyler, he’s just happy to continue to raise awareness for a disease that affects almost everybody.

“I’m excited. It’s good to be a part of it., even just a small part. definitely a worthwhile cause, something that everybody can help with and everyone should know about,” Gillies said.

His manager couldn’t be prouder of him.

“Everything he’s gone through, the kid is a warrior. My dad just had some brain tumor surgery, he’s going through radiation,” manager Joe Ayrault said. “It’s one of those things, praying every day, give him strength, peace of mind. And it’s one of those things, cancer awareness, its everywhere. You got people all over the world dealing with it.”

The season continues on and while Tyler may not be where he was back in 2019, the last healthy season he had, he’s grateful to still have the chance to play the sport he loves.

“There’s just some perspective,” Gillies said. “At the end of the day, just be thankful for where you are. So, I had a bad outing on Tuesday, just shake it off and move on to the next.”