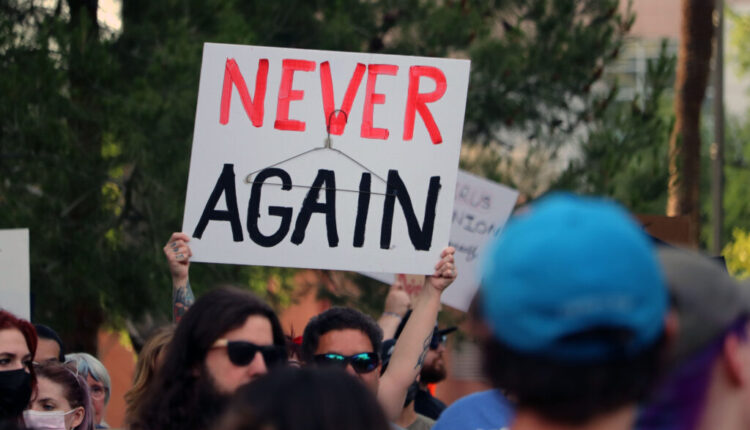 Reaction was swift across the U.S. Friday as the U.S. Supreme Court erased almost 50 years of abortion law.

Here is look at reports from states as reported by independent newsrooms affiliated with States Newsroom:

In a landmark opinion handed down Friday, the U.S. Supreme Court brought an end to the nearly 50-year period in American history when the right to have an abortion was secured by the nation’s highest court.

Now, in some states, seeking an abortion could make someone a criminal — and advocates warn that the burden will fall disproportionately on pregnant people of color, who are more likely than white people to be arrested and detained.

“A lot of people of color … will only be targets now that they will seek abortion care,” said Aurea Bolaños Perea, spokesperson for the Colorado Organization for Latina Opportunity and Reproductive Rights, or COLOR. “Our bodies will be criminalized for seeking abortion.”

The U.S. Supreme Court’s Friday decision to overturn Roe v. Wade quickly reverberated throughout Georgia and beyond as the reaction ranged from ‌outrage and frustration among abortion rights supporters to jubilation from anti-abortion activists.

With the landmark ruling throwing out a constitutional right to an abortion, regulating access to the procedure will now be left up to each state.

Abortion rights advocates said the ruling is a devastating setback that limits women’s ability to make private medical decisions and determine what is best for them and their families.

In a 6-3 ruling, the U.S. Supreme Court has voted to overturn the 1973 Roe v. Wade decision that determined a person’s constitutional right to seek an abortion, a move that will make abortion illegal in nearly all cases in 13 states, including Idaho, Utah and Wyoming.

The decision follows a report in early May in Politico signaling the court was poised to reverse the ruling through a leaked draft opinion written by Justice Samuel Alito. In addition to Roe v. Wade, the Supreme Court also overturned Planned Parenthood v. Casey, a 1992 case about restrictions placed on abortion access.

“The Constitution does not confer a right to abortion; Roe and Casey are overruled; and the authority to regulate abortion is returned to the people and their elected representatives,” the justices in the majority wrote.

Louisiana is expected to ban almost all abortions after the U.S. Supreme Court eliminated the federal right to an abortion by overturning its Roe v. Wade decision Friday morning. The state’s three abortion clinics — in Shreveport, Baton Rouge and New Orleans — stopped administering abortions within hours of the court’s decision, though there is ambiguity about whether the state ban is in effect yet.

“We are suspending performing abortions as we decide our next step with our legal team,” said Kathaleen Pittman, who manages Hope Medical Group for Women, an abortion clinic in Shreveport. “As you can imagine, we have devastated patients already here today so we are concentrating on them and assisting them with their options.”

The United States Supreme Court did what many had expected after Politico obtained a leaked copy of a draft opinion regarding Roe vs. Wade, and overturned the landmark ruling Friday. Here’s what the ruling means for Montana.

In 2021, the Montana Legislature, controlled in both Houses by a large majority of Republicans, passed four different laws that put significant restrictions on the procedure in the state. Those measures were supported by Gov. Greg Gianforte. They were quickly challenged in state court where a judge placed a temporary injunction on the measures until the case, which will likely make its way to the state Supreme Court, will be decided.

This means that abortion, as practiced in Montana, will be largely unchanged for the moment.

Abortion is now illegal in Missouri in wake of U.S. Supreme Court ruling

ST. LOUIS – Shaking her head in disbelief while sitting at Missouri’s last remaining abortion clinic, U.S. Rep. Cori Bush threaded her fingers together and bowed her head as the constitutional right to abortion unraveled.

“Oh my gosh,” Bush said Friday morning, her voice breaking as she was wrapped in a hug. “Oh my gosh. Oh my gosh. 49 years. 49 years. I’m sorry. 49 years and they strip it away. 49 years. Thirty-six million people will be affected and it’s, ‘Oh well.’

“Today, I filed a motion urging the court to immediately take up my lawsuit to protect abortion in Michigan,” Whitmer said in a prepared statement. “We need to clarify that under Michigan law, access to abortion is not only legal, but constitutionally protected. The urgency of the moment is clear—the Michigan court must act now.”

LINCOLN — Nebraska could be headed toward a special session now that the U.S. Supreme Court has overturned Roe v. Wade, although it’s unclear what new abortion restrictions, if any, could survive a promised filibuster.

The Legislature this year fell two votes short of passing a “trigger bill,” which would have banned abortion in the state if the U.S. Supreme Court reversed Roe v. Wade — as it did Friday.

A filibuster stopped Legislative Bill 933, and legislative leaders say little has changed since then. The late State Sen. Rich Pahls was ill with cancer during the spring debate. He has since been replaced by Republican Kathleen Kauth of Omaha. But that gubernatorial appointment alone is not enough to flip the legislative math toward passage of a total ban, political observers said.

From ‘Hallelujah’ to ‘Hell, no,’ Nevada reactions to abortion ruling span spectrum

The end of the nearly half-century battle to overturn Roe v. Wade, the case that gave Americans the constitutional right to an abortion, is accelerating the divisive debate – especially among candidates seeking election in November.

Republican gubernatorial candidate and Clark County Sheriff Joe Lombardo is leaving the door open for Nevada’s long-standing abortion protections, which are codified in law, to be overturned at the polls.

“This morning, the United States Supreme Court rightfully returned the power to the people and their elected state representatives,” Lombardo said in a statement. “As the U.S. Supreme Court decided today and as Nevadans decided long ago, this important issue was and should be decided by Nevada voters, and moving forward, I trust them to make the best decision for our state.”

Protests and legislative pressure expected as N.J. prepares for fallout of abortion ruling

After the U.S. Supreme Court ruled Friday that women no longer have a constitutional right to abortion, New Jersey Gov. Phil Murphy called on lawmakers to pass legislation now in the pipeline that would expand abortion access here.

Murphy, speaking at his office in Trenton, singled out one bill that would protect women who come to New Jersey for abortions from states looking to ban or severely restrict the procedure.

With the ruling, advocates are shoved further into the fight for reproductive rights, which often seemed tenuous through the decades as state officials rolled out abortion restrictions and presented legal challenges to Roe v. Wade.

This decision by today’s conservative-leaning Supreme Court eliminates federal constitutional protection of abortion rights, leaving it up to individual states.

Ohio abortion bans on the way following death of Roe

Now that Roe v. Wade has been overturned by the U.S. Supreme Court, the Ohio legislature is set up to move forward with abortion bans in the state.

The U.S. Supreme Court ruled Friday morning that “The Constitution does not confer a right to abortion; Roe and Casey are overruled; and the authority to regulate abortion is returned to the people and their elected representatives.”

The U.S. Supreme Court’s decision Friday to overturn Roe v. Wade tore the nation’s political garment down the middle as it sent abortion decisions back to the state level.

In Tennessee, abortion rights will be nearly outlawed within a month, setting off a celebration among Republicans who passed some of the most restrictive laws in the nation in anticipation the court would reverse the 50-year-old abortion ruling.

Gov. Bill Lee said the landmark Supreme Court decision marks the start of a “hopeful, new chapter” for the country.

Gov. Glenn Youngkin applauded Friday’s U.S. Supreme Court decision abolishing the constitutional right to an abortion and said Virginia Republicans will get to work on legislation “protecting the life of unborn children” by potentially banning most abortions after 15 weeks.

“The Supreme Court of the United States has rightfully returned power to the people and their elected representatives in the states,” Youngkin said in a statement released roughly an hour after the court handed down the seismic ruling that overturned the landmark Roe v. Wade decision. “I’m proud to be a pro-life governor and plan to take every action I can to protect life. The truth is, Virginians want fewer abortions, not more abortions.”

Wisconsin politicians reacted swiftly to the news on Friday that the U.S. Supreme Court had overturned the precedent set by Roe v. Wade, which had established a federally protected right to abortion in the first trimester of pregnancy.

State Sen. LaTonya Johnson (D-Milwaukee) tweeted, “It’s a damn shame Wisconsin Republicans could have protected women during @GovEvers special session on Wednesday ahead of today’s decision by #SCOTUS to overturn Roe but CHOSE not to.”

Meanwhile, state Sen. Kelda Roys (D-Madison) offered practical advice to her constituents: “Medication abortion is safe, easy to use, and private – every person of reproductive age should order one now at AidAccess.org. It costs about $100 and takes approximately 4 weeks to arrive, so it’s important to order now before you need it.”