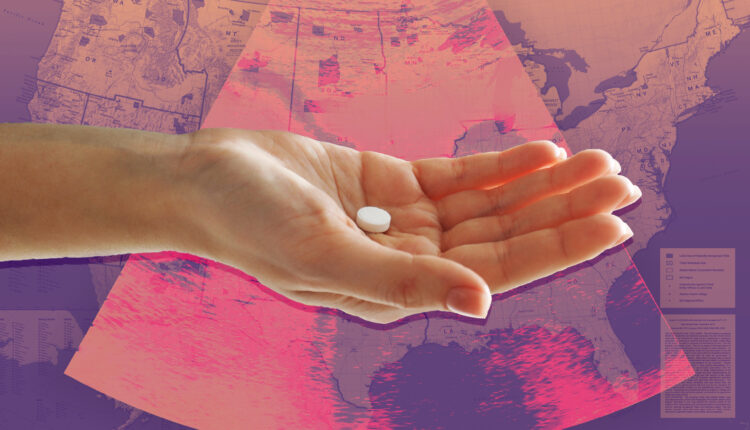 Rachael Lorenzo started hearing the questions several weeks ago from strangers on Twitter and reporters seeking interviews: Since Native American tribes are sovereign nations, with their own laws, could they offer abortion services on Native land within states that may soon outlaw abortion?

The speculation began last month, after a leaked draft of a U.S. Supreme Court opinion suggested the court is poised to overturn Roe v. Wade, the 1973 decision that guaranteed the right to an abortion nationwide.

Lorenzo and other Indigenous abortion rights advocates say the questions have mostly come from non-Native people.

The advocates said they hadn’t heard of any tribe or Indigenous organization advocating for opening clinics on tribal land to offer abortion services. Planned Parenthood, the nation’s leading provider of abortions, told KHN that it is not exploring this option and that such decisions should be left to Indigenous people.

Any such plan would be fraught with legal, financial, and political hurdles, the advocates said. And they wondered why many people now asking about opening clinics on reservations didn’t seem interested in health care access there before abortion rights were threatened nationwide.

Lorenzo — who is of Mescalero Apache, Laguna Pueblo, and Xicana heritage — is the director of Indigenous Women Rising, an Albuquerque-based nonprofit that helps Indigenous people in the United States and Canada afford abortions.

Lauren van Schilfgaarde, a legal clinic director at the UCLA School of Law and a member of the Cochiti Pueblo, said that people are looking for ways to ensure abortion access if Roe v. Wade falls but that the reservation solution is problematic. “I think people are throwing spaghetti at the wall and then suddenly remembered, ‘Oh, yeah, tribal sovereignty.’”

“It’s sort of a weird argument to say, ‘Oh can tribes help?’ Like, no, tribes are already in a worse position than you are,” she said.

Some tribes lack running water and funding, Many Indigenous people — once targeted with nonconsensual sterilizations — still don’t have access to high-quality health care.

Oklahoma is among the states making national headlines for passing abortion restrictions. Its governor, Republican Kevin Stitt, is also pushing back against a 2020 U.S. Supreme Court decision that expanded tribal jurisdiction in the state. Stitt said during an appearance on Fox News in May that he thinks tribes might try to offer “abortion on demand. They think that you can be 1/1,000th tribal member and not have to follow the state law. And so that’s something that we’re watching.”

Carly Atchison, a spokesperson for Stitt, told KHN that the Oklahoma attorney general’s office advised the governor that tribes might be able to offer abortions on their land. She said she hadn’t seen any clear statement from tribes on whether they might try.

Spokespeople from the five largest tribes in Oklahoma did not respond when KHN asked whether any tribal members or elected representatives had suggested offering abortions.

But Cherokee Nation Principal Chief Chuck Hoskin Jr. did respond to Stitt’s comment. “Speculating on what tribes should do based on a leaked U.S. Supreme Court draft decision is irresponsible,” Hoskin wrote in a statement released to the media. “Just as irresponsible is the governor of Oklahoma and his disguised media campaign, which is really meant to attack tribes and our sovereignty.”

Lorenzo and other Indigenous advocates said many non-Indigenous people now discussing the possible use of reservation land for abortions have been silent on related issues that affect Native Americans.

Many Indigenous people living on reservations have lacked access to abortion services since 1976, when the so-called Hyde Amendment went into effect, Lorenzo said. Through the Hyde Amendment, Congress prohibited federal money from being used to pay for most abortions. And that means the federally funded Indian Health Service — the main health care provider on many reservations — can provide abortions in only limited circumstances.

Even if tribes wanted to allow abortion services on their land, the legality of doing so would be murky, van Schilfgaarde said. Criminal cases on Native American reservations are handled by tribal, state, or federal courts, depending on the situation.

The legal questions could get even more complicated under a new type of abortion restriction, first seen in Texas, van Schilfgaarde said. She expects to see more of those laws, which are enforced in civil, instead of criminal, courts. Determining whether tribal, state, or federal courts have jurisdiction in civil cases is even more tricky than it is in criminal cases, van Schilfgaarde said.

Legal issues wouldn’t be the only barriers to providing abortion services on tribal land. Tribal councils would be unlikely to approve such clinics, said Charon Asetoyer, executive director of the Native American Women’s Health Education Resource Center on the Yankton Sioux reservation in South Dakota.

Asetoyer said many tribal leaders’ views on abortion are shaped by religion. “The churches have a pretty big hold,” she said. “Politically, I think it would be very challenging to see one of our leaderships stand up for the rights of women. I really don’t think it’s going to happen.”

Other challenges could include funding and staffing such clinics, providing security for employees and patients, navigating any licensing barriers, and paying for lawyers to defend against expected lawsuits.

Asetoyer also noted that some clinics, such as the one in South Dakota, have had to fly in doctors from other states to perform abortions. Would those doctors be willing to travel to reservations, some of which are a few hours’ drive away from the nearest airport?

Although the current conversation about potential abortion services on Native land is mostly being raised by non-Indigenous people, Native Americans have their own history of abortion and reproductive rights advocacy.

In 2006 on the Pine Ridge Reservation in South Dakota, Cecilia Fire Thunder tried to open a clinic that would have provided women’s health care services, including abortion. The clinic plan was spiked after the Oglala Sioux tribal council ousted Fire Thunder, the tribe’s first female president.