For the Kenosha County Republican Party, 2022 looked like something of a banner year.

In April’s ostensibly nonpartisan elections, candidates with direct Republican connections and financial support won the race for county executive and a majority on the Kenosha County Board of Supervisors. The de facto GOP board majority went on to enact a controversial measure ending a blanket ban on weapons in county buildings, among other policies.

The county board also voted to put an advisory referendum on the November ballot declaring the county a “Second Amendment sanctuary” — an attempt to nullify enforcement of gun control laws. The referendum passed by a margin of more than 3 percentage points.

A key activist in getting those measures through was Kenosha County Board member Erin Decker. The conservative owner of a graphic arts design business from western Kenosha County went from being part of a vocal minority on the board to his vice chair after the April election. Decker also has served as chair of the Republican Party of Kenosha County’s board of directors for several years.

The party’s success in the nonpartisan April election and in passing the gun sanctuary referendum was somewhat tempered in November’s partisan election.

Republicans carried the county, which had a history of favoring Democrats, in the races for governor, US Senate and Congress. Republicans also won the races to replace GOP incumbents who stepped down in a rural Assembly seat and the county sheriff’s office. At the same time, however, the GOP fell short in challenges to the city of Kenosha’s two Democratic Assembly members and to the Democratic circuit court clerk.

Nevertheless, it came as a surprise in the days after Nov. 8 when Decker and five other county party leaders abruptly quit.

The mass resignations came on the heels of a settlement in a defamation suit filed against Decker for a post that she had put on the party’s Facebook page in 2020. As part of the settlement, Decker agreed to pay $10,000 to Joe Clark, a Kenosha accountant , former Kenosha County Board member and member of the board of a local health clinic serving low-income and uninsured patients.

According to financial reports the county GOP filed with the Wisconsin Ethics Commission, the party paid $23,566 — more than twice the amount of the settlement — to lawyers hired to defend Decker and other party board members from Clark’s lawsuit. All of the defendants except Decker were ultimately dismissed from the suit.

Sandy Wiedmeyer, who became party chair in December, told the Wisconsin Examiner in a phone interview that she and other party activists were unaware of the legal bill that the party had racked up in the case until Decker resigned.

“Much of the membership wasn’t aware of the lawsuit and … the money that was spent towards that lawsuit,” said Wiedmeyer, who describes herself as a long-time grassroots activist in the county GOP. “I was surprised [by the defense costs]. I wasn’t aware,” she added.

As a result, she listed “building trust among our membership” and being “transparent” in the party’s operations as the top task internally for the new party board.

Wiedmeyer said that Decker and the other party leaders who quit in November did so of their own accord and without explanation, however.

“The current board was just as shocked by the resignations as what anybody else would be,” she said. “Nobody asked them to resign, nobody forced them out. They only know their reasons as to why they resigned.”

Wiedmeyer said that after the party reconstituted its board membership in December with her as chair, her goal has been “just to move forward, and in a positive way,” including organizing members for the April election. “It doesn’t do the party any service to keep rehashing the past or to point fingers,” she said.

Decker did not respond to several telephone messages left by the Wisconsin Examiner asking to speak about the decision she and the other members made to leave when they did. 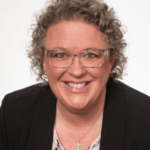 As a county board member, Decker has been among the most high profile Republicans in Kenosha County and often the public face of the party in the last decade. Party veterans, including some who have otherwise criticized Deckers, have credited her with helping to build the county Republican organization.

She also has courted criticism.

In early August 2020, Decker — at the time, in the minority ideologically on the county board — cast the only vote against a resolution that declared racism a public health crisis. The measure also called for an end to racial disparities throughout county government.

Weeks later came the Aug. 23 police shooting of Jacob Blake, followed by sometimes violent protests in downtown Kenosha that culminated in the shooting deaths of two protesters and wounding of a third by 17-year-old Kyle Rittenhouse.

On Sept. 15, at the first county board meeting after the unrest, Decker stood with her back to the public as local residents spoke out to protest racism. Speakers addressed the back of her head as they appealed for understanding during a two-hour public comment period.

“This is appalling behavior by an elected official. Appalling and unacceptable,” the Kenosha News stated in a sharply worded editorialadding that “no elected official is entitled to treat the citizens she represents with contempt.”

In the April 2022 county board elections, the county Republican party put money into the campaigns of several candidates for the nonpartisan post of county supervisor. The bloc of candidates backed by the party ran on issues including public safety and parental rights in education, and gained a majority on the board.

Some of the financial statements that the county party organization filed with the ethics commission in 2022 list Decker’s teenage daughter, Elinor, in the capacity of “treasurer.” She was among the group who left in November.

Decker’s Facebook post that prompted Clark’s defamation lawsuit was published April 28, 2020. The post cast aspersions on Clark as a member of the board of the Kenosha Community Health Center (KCHC) as well as on Jim Kreuser, the Kenosha County executive at the time who was also a former Democratic leader in the Assembly.

The Facebook post has been taken down as a condition of the settlement with Clark. According to a legal brief that Clark’s attorney filed in August 2022 in the defamation case, the post stated “that Kreuser (then Kenosha County Executive James Kreuser) was ‘using tax dollars to help his buddy Joe Clark’.” The post also called Clark “crooked.”

In the brief filed in opposition to a motion by Decker’s lawyers to dismiss Clark’s lawsuit, Clark’s attorney calls the statements false. The brief also states that labeling Clark “crooked” was particularly damaging given his profession as a certified public accountant, and that Clark wasn’t a public figure under libel law for whom it would require malice or reckless disregard for the truth in order to prove defamation

In several interviews with the Wisconsin Examiner, Clark said that while he considered himself a conservative, in his 10 years on the Kenosha County Board he prided himself on working with people of varying political stances.

“My record shows that I’m pretty conservative,” Clark said Monday. “But at the local level, I don’t put all my stock in whether someone’s a Republican or a Democrat. I put my stock in someone who’s willing to do the work.”

In an earlier interview, Clark said that he once considered Decker an ally, but that they fell out in 2016 when Clark, who was no longer on the county board by then, decided to back a candidate for a board seat whose opponent Decker was backing .

The August brief includes a litany of incidents in which Decker undertook to have Clark investigated for baseless reasons after that election in 2016. The 2020 Facebook post, the brief states, was “Decker’s attempt to take a public health initiative headed by KCHC and turn it into an opportunity to harm the reputation of Clark.”

At a Sept. 7, 2022, hearing, Kenosha County Circuit Court Judge Anthony Milisauskas sided with Clark, declining to dismiss the suit. Clark was not a public figure, the judge ruled. And he rejected Decker’s attorneys’ argument that “crooked” was simply a matter of opinion.

“So this argument saying, ‘Hey, I can just say crooked it doesn’t mean anything,’ to me, it doesn’t hold any water,” Milisauskas said, according to a hearing transcript. “And if you have a different interpretation that he’s not a crook and you can just say that, let the jury decide that.”

The judge ordered both sides to go to mediation, and they reached the terms of a settlement Nov. 2, according to records in the case. The formal settlement was signed Nov. 28. It includes a statement that the agreement is not “an admission of liability” on the part of either Clark or Decker.

Clark said Monday that Decker has paid him the $10,000 settlement in full. Not counting the defense lawyer’s fees, the settlement amount is more than six times what Clark’s lawyer asked for in a demand letter sent April 29, 2020, to Decker and four other party leaders: $1,000 for Clark, and $500 in attorney’s fees.

Clark said as far as he is concerned the battle is not over, however.

Milwaukee woman, 23, dies after crashing into light pole on 35th and Townsend