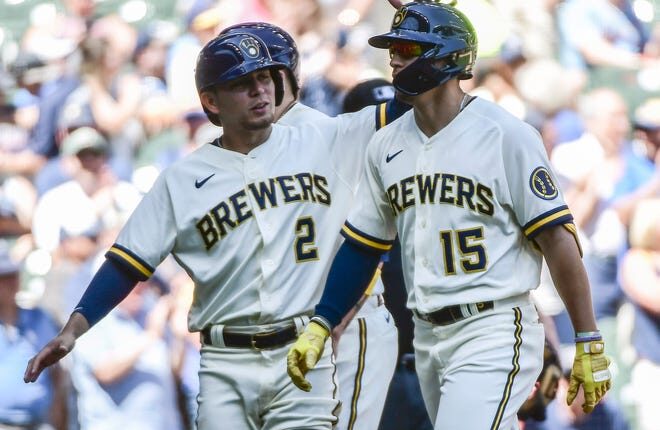 The start truly couldn’t have been much earlier Thursday at American Family Field, but the response was worthy of a return to first place in the division.

After a shaky top of the first inning that saw the Brewers kick the ball around on an unsightly play, Milwaukee hit a pair of homers off St. Louis Cardinals starter Dakota Hudson on their way to a 6-4 win to walk away from a four -game series with an even split.

Tyrone Taylor provided the big blast, a go-ahead three-run homer in the fourth, and Willy Adames added a critical insurance run in the fifth with his 15th homer of the season and fourth in his last seven games.

Brad Boxberger, Devin Williams and Josh Hader combined to record 10 outs while protecting a one-run lead to draw the Brewers even with the Cardinals atop the division.

More:‘I couldn’t be more appreciative’: As Toronto comes to Milwaukee, Rowdy Tellez reflects on his eight years as a Blue Jay

Through three series between Milwaukee and St. Louis, the teams are even at six wins apiece, and each four-game set has been a split as well.

Jason Alexander picked up his second major-league win by going 5⅔ innings and allowing four runs (all earned) on six hits and two walks while striking out five.

After Nolan Gorman singled with one out in the first, Paul Goldschmidt followed with a double to the fence in left. The Brewers had a chance to nab Gorman at the plate but Adames’ relay throw from shallow left hit Gorman and ricocheted away, allowing Goldschmidt to take third. Alexander, backing up the play, chased the ball down and attempted a spinning throw to the third but sent it far wide. It not only skipped past Jace Peterson at the base but got by both Adames and Luis Urias, which allowed Goldschmidt to trot home.

Nolan Arenado followed with a double, and then Alexander hit Brendan Donovan. Everything was seemingly headed in the wrong direction for the Brewers before a double play grounder by Juan Yepez helped Alexander escape the inning.

Christian Yelich doubled and scored in the bottom half of the first, and then Milwaukee jumped in front, 4-2, on Taylor’s blast in the fourth. Had Andrew McCutchen not been thrown out at the plate on a Victor Caratini single one batter before Taylor stepped up, it would have been a grand slam, but the Brewers weren’t going to complain about getting a timely hit. After squandering a bases-loaded, no-out chance in the third, they were 1 for 24 with runners in scoring position in the series.

Lars Nootbaar and Adames exchanged solo homers in the fifth and the Cardinals drew within 5-4 on a Yepez sacrifice fly in the sixth.

The score stayed that way until Jace Peterson’s sacrifice fly plated McCutchen in the eighth.

Which wine opener should I buy? | WFRV Local 5