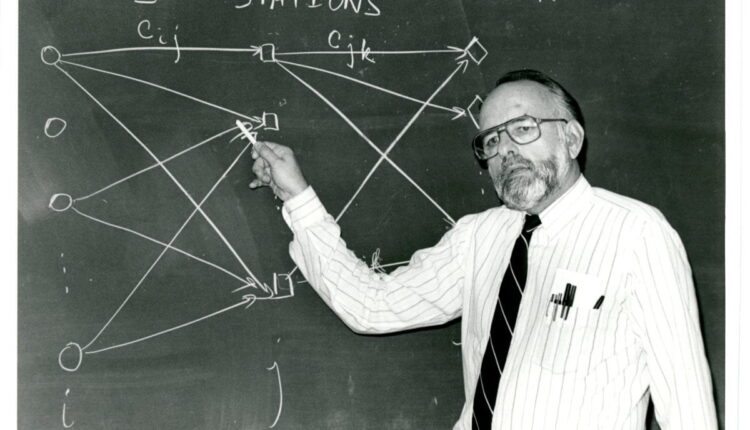 That same year he was awarded the Founders Association Award for Excellence in Institutional Development. Faculty colleagues noted in his 1985 Founders Award nomination, “As chair of mathematics, Professor Wenger has performed his duties with a sense of responsibility and integrity that is, in my opinion, unmatched by any individual I have ever known.” Among the many recognitions he received was the Barbara Hauxhurst Cofrin Professorship of Natural Sciences (in 1997).

He was also a leader of the International Visiting Scholars Program which brought people from around the world to the Green Bay area to share their expertise in a vast number of fields. He continued his contributions to UW-Green Bay even after retiring and achieving professor emeritus status in 1999—mentoring students, being involved in research and writing, and continuing his work on environmental issues, specifically water-quality issues in Wisconsin and around the world. His specialty was applying mathematical principles and techniques to a wide range of scientific problems with practical real-world applications.

He, along with Prof. Jack Day were honored with the Founders Association Award for Collaborative Achievement in 2005, recognizing their work to launch the groundbreaking International Visiting Scholars Program, the first formal joint venture between UW-Green Bay and St. Norbert College. He served as chair of an interdisciplinary science unit for many years and was engaged in university governance as well. His obituary notes that he was a kind and gentle man, well-respected by administrators, faculty, and students.

According to friends, he was appropriately characterized as one who “never crossed paths with someone without showing them respect, kindness, and curiosity.” He was a tremendous supporter of Green Bay basketball, especially the women’s program. A celebration of life will be held in the spring. To send online condolences, please go to www.PfotenhauerFuneralHome.com. Pfotenhauer Funeral Home & Cremation Services, East Town, is assisting the family. See the full obituary.

As States Seek to Limit Abortions, Montana Wants to Redefine What Is Medically Necessary

Racine Theater Guild is All About Community