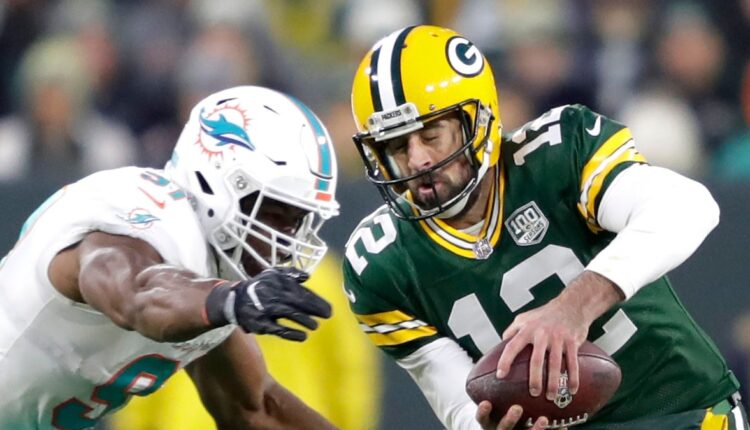 GREEN BAY, Wis. – For one team, Christmas is going to be merry. For another, it’s going to a lump of coal.

The Green Bay Packers and Miami Dolphins will square off on Sunday in one of the biggest games of the week. With their 6-8 record and on the far fringe of the NFC playoff race, the Packers are in must-win mode. With their 8-6 record and three-game losing streak, the Dolphins are holding on for dear life in the AFC playoff race.

Kickoff is at noon (Central). While it was 81 as of midday Thursday in Miami, Sunday’s forecast calls for a high of 54 and a chance of showers.

The Packers are coming off back-to-back wins over the Bears and Rams, teams that occupy the bottom two spots in the NFC standings. The Dolphins, who are coming off losses to the powerful trio of the 49ers, Chargers and Bills, will pose a much, much stiffer challenge.

“We’ve obviously played a little better the last two weeks against bad teams and now we’ve got to play good against three good teams,” Packers quarterback Aaron Rodgers said in looking ahead to the finishing schedule of the Dolphins, Vikings (11 -3) and Lions (7-7, but 6-1 the past seven).

The Packers shouldn’t be in this predicament but lost five consecutive games and seven of eight. Only two of those losses came against teams that will be locks to get into the postseason.

“What is” – and not “what if” – “is the most important thing,” Rodgers said. “And what is, is that we’re still playing a meaningful football game on Christmas and got a chance to have a lot of things in front of us. Now, obviously, we’ll be watching Saturday and there’s some things that need to go our way. But we’ve got to go down and get a win. I said a few weeks ago, we just get one, then we get another one, and things look a little bit different going into this game. And we get this one, things look a little bit different going into the next one.”

The quarterback battle will be a fascinating one. For Rodgers, this year has been a struggle following the offseason trade of Davante Adams and injuries to himself and rookie receivers Christian Watson and Romeo Doubs. While Rodgers lost Adams, Miami’s Tua Tagovailoa gained Tyreek Hill, whom the Dolphins acquired in a trade with the Chiefs. Perhaps the fastest player in the NFL, Hill is second in the league in receptions and receiving yards.

Without Adams, Rodgers’ passer rating is down almost 20 points from last year. With Hill, Tagovailoa ranks No. 1 with a rating of 107.8

“He’s playing at a really high level,” coach Matt LaFleur said. “I think he’s a guy that throws with such great anticipation. Just watching him, he’ll definitely throw the ball well before receivers are breaking. He makes good decisions. I don’t pay attention to this all the time, but isn’t he leading the league in rating? So, I think that says a lot right there.”

The Dolphins are 5-1 at home while Green Bay is 2-5 on the road. Its road wins came against Tampa Bay and Chicago. Having played on Saturday night, Miami will have a 48-hour rest advantage in addition to its homefield advantage.

The Dolphins are 3.5-point favorites at SI Sportsbook. Tickets are available for as low as $167 at SI Tickets.

Some good news on the injury front on a short week

KHN’s ‘What the Health?’: The Covid Response Coordinator Speaks