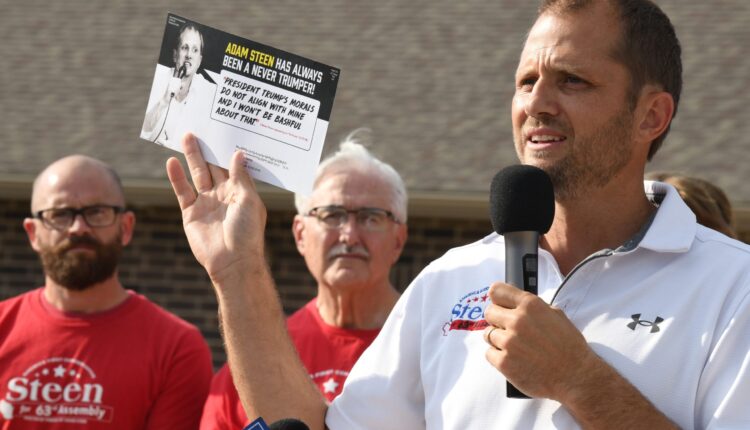 RACINE, WI — After winning the primary for the 63rd Assembly seat by 260 votes on Aug. 9, House Speaker Robin Vos will face his Republican opponent Adam Steen again as a write-in candidate in the general election on Nov. 8.

About 10,000 people voted in the 63rd District Assembly race on Aug. 9. The district includes the communities of Rochester, Burlington, Town of Burlington, Yorkville, Dover, Union Grove, Mount Pleasant, and Sturtevant.

Steen’s decision to launch a write-in campaign reflects a rift within the Racine County Republican Party. Former President Donald Trump sought to influence the midterm elections by overturning the 2020 election, a plan supported by HOT Government, a non-partisan group that Steen aligned with during the primary.

Pressure on Vos ramped up after he refused to overturn the election at the request of former Wisconsin Supreme Court Justice Michael Gableman. Vos hired Gableman to lead the Office of Special Counsel created to investigate fraud claims in the 2020 presidential election. Still, Vos refused to entertain the suggestion that Wisconsin could accomplish the legally impossible task of recalling the state’s electoral votes.

During a press conference Thursday night, Steen announced his plan to run a write-in campaign against Vos. He claimed that if voters had known that Trump endorsed him and that Vos “displayed false information in his mailers,” he would have won the election.

“This is absurd,” Steen said, holding up one of Vos’ mailers stating that Steen was a “never Trumper.” “I said we could solve our elections in eight words…in person, on paper, hand count, one day. I am trying to create solutions to these problems, and my opponent chose to ignore these problems.”

Vos disagreed with these characterizations.

“So he kind of brought in this idea (of overturning the election) to please – I think – the former president and many of his supporters that we could overturn the election, which is constitutionally impossible,” Vos said.

Days before the primary, Gableman backed Steen because he said Vos had “taken no steps to hold the Wisconsin Election Commission accountable” for “rampant fraud and abuse that had occurred statewide,” according to the Save America PC endorsement of Steen.

He also claimed that Vos did nothing to clean up the Wisconsin voter rolls or remove Wisconsin from the Election Registration Information Center.

But Vos pointed out that he tried to pass 19 bills and three constitutional amendments based on recommendations from the Legislative Audit Bureau and Gableman’s Special Counsel. Still, Gov. Tony Evers vetoed all of them. The bills focused on who could and could not return an absentee ballot, barred election clerks from curing ballots by filling out missing information on the ballot envelope and required voters to show a photo ID every time they requested an absentee ballot.

Vos said changes need to be made in how people vote, specifically around ensuring that people requesting absentee ballots can’t vote under someone else’s name or that voter rolls get cleaned up once people move or have died.

The contract between Gableman and the Wisconsin State Legislature included Gableman not engaging in partisan politics, which would “take away from the independent nature of the investigation,” or making public appearances. Legislators wanted Gableman to focus on winning lawsuits in court, Vos said.

“Well, that clearly went off the rails when he decided to get involved in partisan politics in a very personal way and especially when he wasn’t telling the truth,” Vos said. “The second thing was, he lied and said that somehow I didn’t want a serious investigation. Well, why do you think I hired him?”

Steen won’t take ‘no’ for an answer

Trump’s influence on Vos’ primary election kept the campaign anchored in the past and not on policy-making moving forward. Vos was a target because he stopped short of saying that Wisconsin’s election system caused Trump to lose the 2020 election and that there was widespread fraud in the election.

“My primary opponents spent every waking minute talking about the last election, which we already have policy proposals to fix, and he didn’t want to accept that this was valid,” Vos said in an interview.

“Look, I want as many people as possible who are legally entitled to vote to do so. I don’t want to put up artificial barriers. I want to make sure it’s secure. I agree with that. So it’s a fine balance that we walk between those two sides to make sure that we make voting as easy as possible while also making sure it’s as secure as we need it to be.”

Now Vos finds himself campaigning against Steen again as he continues to call on Vos to do a forensic audit on the 2020 presidential election results and implement the recommendations of Gableman, whom Vos has fired.

In a response statement, Vos said Steen had recently moved into his district to run against him.

“Now that voters have rejected him, he apparently can’t take ‘no’ for an answer,” Vos said. “He seems intent on re-litigating the primary election he lost, just like he wants to do with the 2020 election. I will continue my focus on representing Racine County and fighting for the issues I heard about when I was knocking on doors across the district throughout the summer: fighting the inflation brought on by Joe Biden’s disastrous policies, combating crime and keeping our communities safe, and improving education and empowering parents.”

While Vos won the battle for his seat, the question remains – has he won the war for control of his party? That depends, in part, on whether Republican voters and the other members of the Legislature’s Republican caucus accept Vos’ claim that tightening election laws, not relitigating Trump’s loss in Wisconsin, is the right focus for his party.

“For those like me who remain concerned about ensuring we have election integrity, we have a simple solution,” Vos said, “to focus on our efforts to elect a Republican governor in November so we can pass the bills that Gov. Ever’s vetoed.”

Historically, Racine County teeters between the Democratic and Republican parties and mirrors the political dynamic in the state and nation as a whole.

Looking through the lens of Vos’ partisan primary race, which he narrowly won by a mere 260 votes, he characterized Steen’s campaign as “super negative” and focused on “lies” and mischaracterizations of his record.

Ultimately, Vos says he took his cues from his constituents in deciding how to carry the party forward, including cutting ties with Gableman and halting the investigation into claims that widespread fraud had occurred during the 2020 election.

“The people I talked to were worried about exactly what you and I know the major issues are: inflation, gas, food, you know what’s being taught in schools,” he said. “I didn’t have many people bring up the 2020 election, frankly, ever.”

The Racine County Eye and Kenosha Lens are committed to providing you with accurate, timely election information. We are your source for local news that serves our diverse communities. Subscribe today to stay up-to-date with the latest election coverage and other local news.