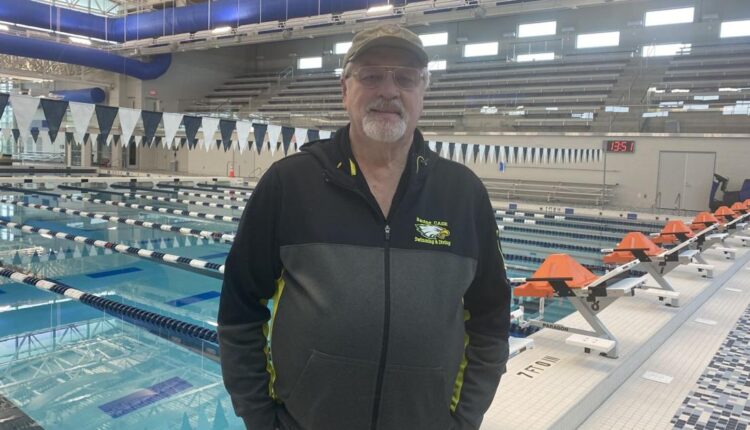 MOUNT PLEASANT — Paige Wood (nee: Weslaski) is expecting her first child, a daughter, in mid-August. There won’t be any suspense within her family as far as the baby’s name because Paige had this figured out a long time ago.

It will be, “Ocean.” That’s how much she loves swimming. And this love was inspired by Frank Michalowski, her former swimming coach at Case High School who has impacted countless young lives in a career that has spanned more than 30 years.

“Largely due to the coaching by Frank, I’ve harbored a love for the sport since I was 10 years old,” said Wood, who swam collegiately at Pepperdine University. “I love it even more every day at age 30 because of the foundation he laid for me.”

A perusal of the Journal Times archives reveals numerous accolades over the decades about Michalowski, who was recently inducted into the Wisconsin Interscholastic Swimming Coaches Hall of Fame and was recognized by the Racine Unified School District for that honor.

One example is this observation in 2006 from Joe Kosman, then coach of Horlick’s team: “He was not gifted with a large team of people, but he took the people he had and really pushed them to make them great.”

He still does to this day and he’s not about to slow down even when he turns 70 next February. He’s been coaching the Case girls team since 1994 and self-taught himself to become better as the years passed. He took over the boys program at Case two years later, stepped down in 2018 and then returned last season because he was needed.

The Frank Michalowskis of this world are always needed.

And the Frank Michalowskis of this world always answer the call. Heck, until a severe cold last season confined him to his home for four days, Michalowski never missed a day of practice.

Racine County has seen plenty of coaching “lifers” over the years. One of the best examples is Tom Scheller, who has coached cross country at St. Catherine’s for nearly 50 years. Some of these coaches even have gymnasiums, fieldhouses and basketball courts named in their honor, like Jack Belden at Horlick and John McGuire and Bob Letsch at St. Catherine’s.

But coaches who make that kind of commitment seem to be a dying breed these days. For a variety of reasons, there doesn’t appear to be as many coaches willing to devote their lives to coaching.

Michalowski is one major exception. After losing his job as return goods inspector for The Oil Gear Company in November 1991 — this was two months before his 38th birthday — Michalowski invested himself solely on getting the most he could out of high school swimmers.

“When I was hired there, they told me they never had a layoff in the entire history of their company and it’s an old company,” Michalowski said. “When I got laid off, it was the first time any layoffs happened at that company.”

Michalowski’s loss at the team proved to be such a significant gain for countless Racine swimmers over the years. That gamut ran from state champions Chris Lashley and Dave Bukacek to so many other kids who never achieved much fame, yet learned the value of hard work under Michalowski that applied it to their careers.

Take Kelli Steenrod (nee: Klepel), a 2002 case graduate who was a four-time state qualifier in high school. Michalowski never worked a day as a teacher for RUSD, but Steenrod contends he was as good as it gets as a teacher.

“From freshmen jumping into competitive swimming for the first time, to graduating seniors heading off to college on a full ride, Frank values ​​each and every swimmer and pushes them to always work harder,” Steenrod wrote in an email interview. “Frank has a subtle way of motivating youth to reach beyond preconceived limits in both the pool and the classroom.

“Frank always makes it clear that academics and family come first. However, when those things are under control, his highest expectation is commitment to the team and maximum effort in the pool. It was because of this that he was a mentor to so many swimmers including myself.

“I have no doubt that there are hundreds of swimming alumni who are now teachers and coaches and doctors and engineers who can trace their work ethic, moral compass, accountability and high expectations right back to Frank. Without realizing it as a teenager, Frank taught so many lessons about being successful in life through our failures and successes in the pool.”

Even as the number of high school swimmers declined over the years — the plan is for Case, Horlick and Park to form a co-op team next season — the Michalowski Method continued to work wonders for those who tuned into his message.

And in Case’s glory days, an era when swimmers actually requested more practice instead of less, the Eagles were one of the most respected program’s in the state.

“He coached outside of the sport,” said Lashley, a doctor in Asheville, NC “The goal was not only to make you a good athlete, but to give you life’s skills to succeed. That was one of the most important things I learned from him — to continue to strive for what you want.

“He’s one of the biggest mentors of my life. I could talk all day about him, but I’m sure there’s plenty of other folks who want to say the same.”

Like Micah Eberle, a 2000 case graduate and multi-state medalist who works in corporate finance for the Lincoln Financial Group in High Point, NC

“What jumps out to me about Frank is that he always made himself available,” Eberle said. “We had morning practices Monday through Friday and they would start at 5:30 and get done at 6:30. And then we would have practices in the afternoon, as well.

“That was at the request of the leadership of the swimmers. It was something where Frank said, ‘If you guys want it, I’ll do it.’ He didn’t even question it where he said, ‘Hey, do you guys really need that many practices?’ or ‘Could we cut it back to two or three?’

“He said, ‘If you want that many, we’ll do it.’ So he has always made himself available to do what we wanted, but he also challenged us, as well.”

How long will Michalowski’s commitment to excellence continue? All that is known for the time being is that he will return for at least one more season as the girls coach. This time he will oversee a co-op program comprised of Case, Horlick and Park.

As for the boys, he does not yet know if he will return for that position.

“I’m at a point where, ‘OK, I want to get this co-op team going and see where it goes from there and then make a decision after that,’ ” he said. “I’m not getting any younger and it might be time for somebody else to get in here and start their own legacy.”

To put it mildly, it will be a daunting task for anyone to even approach Michalowski’s legacy.

“He taught us so many life skills that were so important outside of the pool — whether it was our work ethic, our character, how to be a good teammate or how to be a good person,” said Dan Neumann, a 2001 Case graduate who is an officer for the Mount Pleasant Police Department. “I don’t think you’ll find anyone who has a bad thing to say about the man.

“He truly was like a second father to me because I saw him as much if not more than my own father because of how much I was swimming back then. He’s just a great all-around person and always there when you needed some advice. He was always honest and open and willing to help.”

Added Wood: “Frank is patient, yet tough, caring, yet focused and knows the swimming world inside and out. He coaches new-to-swimming high school freshmen with the same passion as his state champions.

“And the real blessing is not his stellar swimming knowledge and ability to cradle effective swim sets, but his incredible capacity to shape young people into confident leaders, from doctors to lawyers to everything in between.”