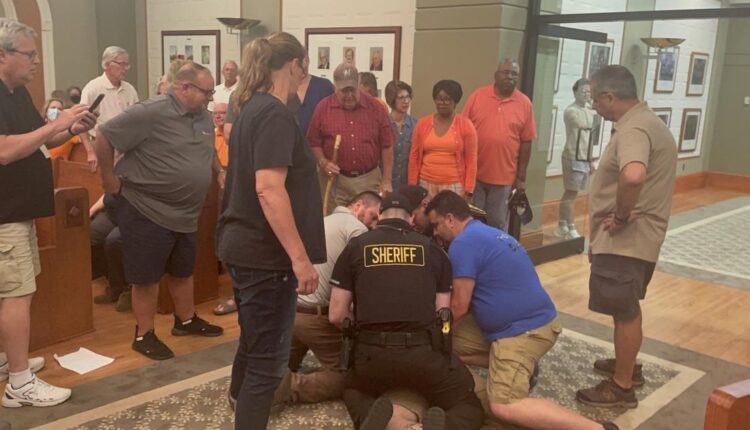 A chaotic Kenosha County Board of Supervisors meeting adjourned after a Kenosha man was arrested during public comments Tuesday night.

The meeting, held in the Kenosha County Administration Building, 1010 56th St., in the County Board chambers, ended after about an hour-and-a-half of public comments.

The board was considering a proposed resolution to amend an ordinance to allow firearms and electronic control devices in some Kenosha County buildings, a proposed policy that would give the Kenosha County executive the power to terminate the employment of division heads, and a resolution prohibiting the acceptance of grants or donations from non-governmental entities for purposes of funding the administration of elections.

More than two dozen area residents signed up to participate in the public comment portion of the meeting and were each allotted 5 minutes to speak.

Joel Trudell, 43, was arrested during his speech by Kenosha County Sheriff’s Department deputies after he refused to stop speaking after County Board Chairman Gabe Nudo told him to stop for allegedly being out of order.

Some of the supervisors were visibly upset about the incident and many attendees shouted for the man to be released and allowed to continue speaking.

The county’s full recording of the meeting was not immediately available late Tuesday.

It’s not clear when the previously scheduled issues will be brought back up for a debate and vote.

This is a developing story. Visit KenoshaNews.com for additional information.