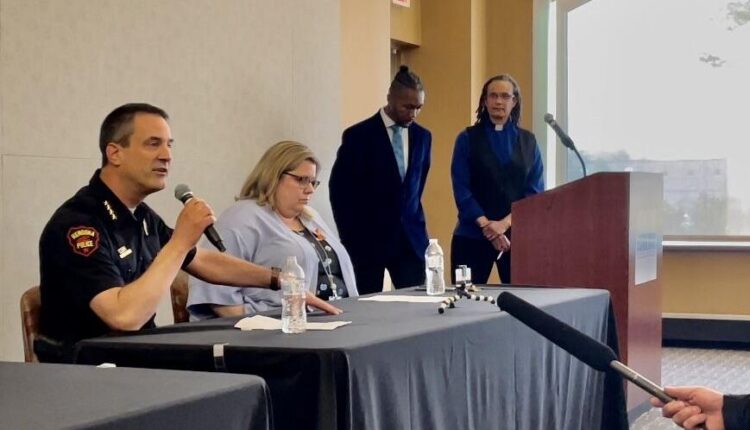 Two of the city’s key leaders were panelists at the latest “Courageous Conversation” about the importance of building community trust between police, school officials and people of color.

Dozens turned out for the event that also included two student panelists from Bradford High School, Aniyah Ervin and Marciara Fuller, and Brandon Wheat, chief minister of defense for Kenosha Coalition Organizing Resolution. It was the first in-person “Courageous Conversation” since the COVID-19 pandemic began spreading here in early 2020.

One of the first questions was about the divide between law enforcement officials and people of color.

“How can we overcome these issues and concerns to improve upon relationships?” Bennett asked.

KPD’s Larsen said it’s importance for officers to learn about the communities they serve and not rely on stereotypes.

“That mistrust that (was) created decades ago can be perpetuated generationally. Similarly, it’s with the (police) academy,” Larsen said. “That fear, that mistrust of community and things like that. How do we get past that? In some ways we’ve got to unlearn what we learned. And you learn that not everyone’s out to get you. (Police) are going to have negative experiences, but you have to start learning to read people. Because they can’t teach you in the academy how to read people necessarily because who are you reading? Other academy people.”

Who will be replacements?

Both Larsen and Ormseth were questioned about who will replace them in their respective roles.

Larsen said the Police and Fire Commission will have the ultimate authority to determine the new chief from what he believes will be a national search.

“If I have any input, one of the main focuses would be someone that’s very focused on community, diversity and those types of things,” Larsen said. He encouraged concerned citizens to attend commission meetings and express their thoughts and concerns about a new chief.

Ormseth said the Kenosha Unified School Board has partnered with the Wisconsin Association of School Boards to conduct its search.

Ormseth said the goal is to have a permanent superintendent named by September.

“There will be opportunities for the community to have input. We set those dates last night. (They will be) June 7 and 8,” Ormseth said. “The ultimate decision is on the school board.”

She encouraged concerned residents to attend district meetings and express their opinion to the board.

Ervin said she would have liked to see a superintendent help foster trust between school resource officers and students.

Another question from the audience pertained to the police-involved shooting of Jacob Blake in 2020.

“What did you learn about community relations immediately after the Jacob Blake shooting? How will you use that information, and how will you use what you learned to interact differently with communities here in Kenosha and particularly communities of color?

“I learned a lot of things,” Larsen said. “One of them was the strength of the community.”

Larsen said he and many officers have fostered relationships with people in the community that never existed before.

“We truly weren’t connected to some of these grassroots level organizations and it was a significant learning experience,” he added.