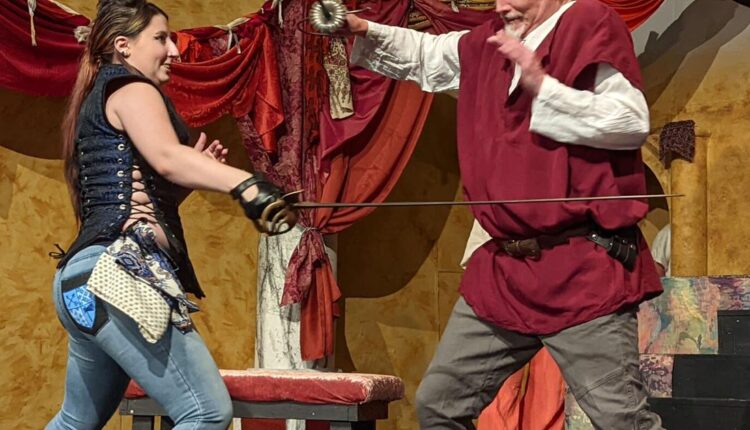 Where: Rhode Center for the Arts, 514 56th St. in Downtown Kenosha

Tickets: $15 general admission or $13 for senior citizens, students, educators and members of the military. (Please bring an ID to the box office for discounted tickets.) Tickets can be purchased at the door or online at fleeingartists.org.

About this show: This version of “Romeo & Juliet” has been trimmed for length, running “a brisk two hours,” said Alex Metalsky, one of the founders of Fleeing Artists. “It’s all Shakespeare’s words, just less of them.”

Another twist, Metalsky said, involves the staging. “The actors in the show are portraying actors in the fictitious Fleeing Artists Brigade, who are doing a production of ‘Romeo & Juliet.’ So, it’s a show-within-a-show,” he said. “There will also be some audience interactions.”

This production, he added, “is fairly traditional. It’s a beautiful story about love, and this is definitely a time when we need more stories about such things.”

Metalsky explained that the name “Fleeing Artists” came “from an article we read that said people in the arts flee small cities for larger cities.” Instead of leaving Kenosha, he said, “we want this to become a place where the arts flourish.”

Since it started, the nonprofit Fleeing Artists troupe has performed indoor and outdoor shows at Kenosha’s Lincoln Park and the historic Rhode Center for the Arts theater.

The troupe’s fifth season opens with “Romeo & Juliet” and also includes the comedy “Boeing, Boeing” and the landmark drama “A Raisin in the Sun.”

For more about Fleeing Artists, go to fleeingartists.org and check their Facebook page.

This production of “Romeo & Juliet” is a family project for the Churchills.

Ralph Churchill is working with his daughter, Annika, who is directing the play with him, and his wife, Jaime, plays Lady Capulet.

Ralph Churchill has decades of experience in community theater, having directed 20-plus shows and been on stage as an actor.

But this is his first time working with his daughter to direct a show.

“It’s been very fun working together,” the Round Lake Beach, Ill., resident said. “Annika started coming to theaters with us when she was 4 years old, and it’s been a family passion.”

Annika Churchill is making her directing debut “and getting to do this with my dad is great,” she said. “We basically have the same brain, so we work really well together.”

When she’s not working in community theater, Annika — who graduated from Long Island University in May 2021 with a degree in musical theater — works as a singer and dancer at Six Flags Great America.

This production she said, “has a great cast and is so much fun. We tried to keep the truth of the show intact but with a 21st century mindset.”

Here’s the thing with William Shakespeare: Everyone thinks they know his plays — at least his most famous ones — but it’s still possible to be surprised by a production.

The Fleeing Artists’ theater group kicks off its fifth season with one of the Bard’s most popular shows: “Romeo & Juliet.”

What? A tragedy during the summer season? And a romance written in 1595 — centuries before texting, Tinder and even the telephone?

“This is a very well-known story, but we’re doing a little bit different take on it,” said co-director Ralph Churchill, during a break in rehearsal Monday evening at the Rhode Center for the Arts, where the show opens Friday night.

Audiences will notice this “different take” as soon as Romeo — one half of the romantic couple at the center of the tale — appears on stage.

This Romeo is played by Chloe Attalla, and she’s not playing Romeo as a male character.

This Romeo is a woman, and she’s in love with Juliet, played by Emily Keiner.

The heads of the story’s central families, the Capulets and the Montagues, are all female characters, too.

In other words, Romeo has two mommies. As does Juliet.

“Our focus is on how you don’t control who you love,” Churchill said, “and the people in this play love each other for who they are.”

Attalla, who just graduated from UW-Milwaukee with an acting degree, is making her Fleeing Artists debut.

This is also her first time in “Romeo & Juliet.”

“I’m enjoying this character,” she said of her Romeo. “It’s fun to take on a more aggressive role than I usually do.”

Shakespeare’s tragic romance, she said, “is a dream show for me. I like how there’s a little bit of comedy throughout the show, even though it is a tragedy.”

She cites Baz Luhrmann’s 1996 film “Romeo + Juliet” — with Leonardo DiCaprio and Claire Danes in the title roles of two teenagers who fall in love, despite being members of feuding modern-day crime families — as one of her inspirations.

When Keiner isn’t playing Juliet onstage, she’s a music teacher, having graduated from Augustana College in May of 2021.

This is her first-ever role in a Shakespeare play, and she’s enjoying “really digging into the Juliet character. I didn’t realize how much her family is a part of this show.”

Having both Romeo and Juliet be female characters “put a different perspective on the show,” she said. “We play two women in love during a time when this wasn’t common. When they kill themselves, they may have thought they had no other choice.”

For Talia Last — a senior theater arts major at UW-Parkside — playing the role of Tybalt, Juliet’s cousin, is a chance to mix it up on stage.

“This character is a full-on Capulet and loves to fight,” Last said.

Luckily, she has a lot of stage fighting experience in her decade of doing theater (which started with a 2012 Lakeside Players production of the musical “Annie”).

Stage fighting, she said, “is a fun way to get a workout. You feel powerful and confident while getting some exercise.”

She enjoys “any time I’m on stage with a sword in my hand.”

The gender bending in this production extends to the role of Juliet’s nurse/nanny, played here by Cory Fitzsimmons.

This role is quite a switch for Fitzsimmons, who made his Fleeing Artists debut in July of 2021 as the title character in the Greek tragedy “Oedipus Rex.”

“Nurse is a very fun role,” Fitzsimmons said. “It’s the comedic role in the show, and I’m having a lot of fun with it. I’m also having fun portraying a woman in an authentic way.”

He “watched a lot of ‘I Love Lucy’ so Lucille Ball is my inspiration for this role, along with my high school lunch lady,” Fitzsimmons said. “I’m finding the humor in this play.”

Evictions are surging in Milwaukee County

Some Rural Hospitals Are in Such Bad Shape, Local Governments Are Practically Giving Them Away