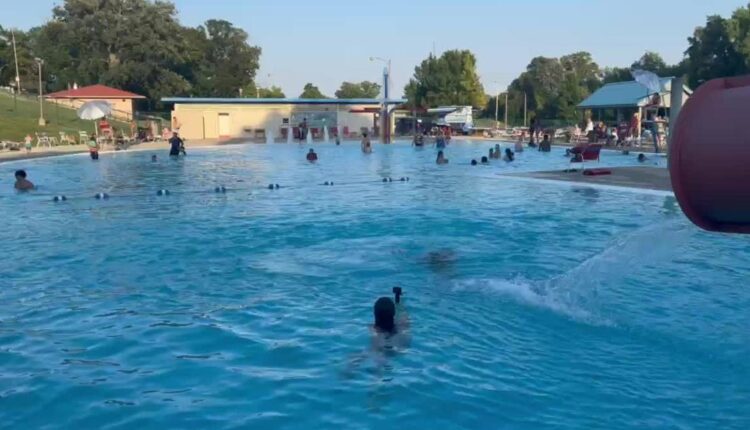 David Benjamin shot out of the red slide at Washington Park Pool and straight into the pool. He then started to bob up and down in the water, seemingly unable to stay afloat.

That was the scene at the beginning of a water safety demonstration as part of a Washington Park Pool Family Swim and Water Safety event Friday. It was sponsored by the City of Kenosha and presented in cooperation with the Kenosha Safety Around Water Coalition.

“He knows what to do is remind himself how to flip … he has now gone onto his back,” said Seth Weidmann, the head men’s swimming and diving coach at Carthage College, who was narrating the demonstration. “That leaning back motion allows him now to float, figure out where he is and figure out how to get back to shore.”

The “flip, float, follow” method was emphasized throughout the water safety event as the most important tip to remember.

“The emphasis is, if you want to survive a water emergency, you have to stay at the surface and continue breathing for as long as possible for either self rescue or for professional rescue to arise,” said Dave Benjamin, the co-founder and executive director of the Great Lakes Search and Rescue Project (and David’s dad).

“So if you can get over the initial signs of drowning panic attack, and you don’t submerge in that first minute — and if you could float for two minutes, five minutes, 10 minutes — you’re buying more time for either self rescue or professional rescue to arrive,” he said.

He emphasized people may know how to swim, but usually don’t have the endurance to prevent themselves from drowning in a lake.

“Most people assume that knowing how to swim (means) that you (couldn’t) drown,” he said. “But most people don’t associate swimming as an endurance sport.”

Danger not limited to Lake Michigan

Tyler Cochran, a Kenosha Police officer, said there has been extra emphasis on the dangers of swimming in parts of the lakefront, but the same “flip, float, follow” method works in inland lakes and pools as well.

“We’ve always really hit that lakefront as being so dangerous, but we’ve never really talked about the inland lakes,” Cochran said. “We’re trying to spread that message, like just at a pool, to make sure you’re practicing that same water safety that you’re practicing down at the lake.”

Benjamin said the signs of a drowning person are typically the person is facing shore, mouth is at water level, head is tilted back, the body is vertical and the person will be making a ladder-climbing motion.

“You’re going to submerge in less that one minute,” Dave said.

In a presentation given before the demonstration, Weidmann gave the following safety tips:

Cindy Altergott, CEO of the Kenosha YMCA, echoed those tips, along with recommending swimming lessons.

“One thing we have at the Y is the ability to offer reduced-rate swim lessons through a couple of different programs,” Altergott said. “We have our scholarship program and the centennial program with the Red Cross, so even if someone doesn’t have the ability to afford swim lessons, we can provide them.”

“I think if we all remember that there are dangers along with the fun, we can build a healthy respect for it,” Altergott said. “No one wants to stop having fun in the water, but we have to try to build that healthy respect. That’s what events like this do.. (It) reaches out and brings education to the community.”

Dave said water safety is not taught in the same way other public health issues are addressed.

“We don’t have a water safety school curriculum, but we have other curriculums for public health issues like fires, tornadoes, school shootings and earthquakes,” Dave said. “So it’s very important that we have face-to-face interaction with people about water safety.”

What do you do when you’re drowning? 4 water safety tips from the experts

More common than you think


Dave Benjamin, co-founder and executive director of the Great Lakes Surf Rescue Project, usually starts his water safety classes by talking about fire. “What do you do in case of a fire emergency?” He normally asks the crowd of children. “Stop, drop and roll,” they say.

“What do you do if you’re drowning?” More often than not, the children stay silent.

Drowning, according to the Centers for Disease Control and Prevention, is responsible for more deaths among children age 1 to 4 than all other causes except birth defects. For children age 1 to 14, drowning remains the second-leading cause of unintentional injury-related deaths, just behind motor vehicle crashes. Water safety, Benjamin (pictured speaking) said, “is not common sense.” Even the most advanced swimmers could be at risk.


Kathy and John Kocher hold a family photo of their son Matthew Kocher, who drowned in 2013, on Tuesday, June 18, 2019 at Gillson Park in Wilmette. (Brian Cassella/Chicago Tribune/TNS)


On July 27, 2013, 15-year-old Matthew Kocher was away from home on a camp trip to New Buffalo City Beach in New Buffalo, Michigan, earning community service hours for school. While standing in the shallow Lake Michigan waters, Kocher got caught in a rip current.

“We were basically pool people, like most people,” John Kocher (pictured in orange), Matthew’s father, said.

Matthew had little experience in open water. Kocher suspects his son and several other people in his camp group, were unaware that the waving red flags on the beach signaled hazardous water condition


After Matthew’s funeral, John and his wife, Kathy, set up a foundation in their son’s name. They have since partnered with Benjamin and the GLSRP to sponsor more than 300 water safety talks in Illinois.

The following are the water safety tips they hope will save a life.

“We would have told Matt about this. Matt would have listened,” John said. “He was that kind of kid.”

1. Know before you go


“Check the weather reports, check the wave reports and check for a rip-current warning. See if any flags are up,” Kocher said.

All of this information can be found on the National Weather Service’s website weather.gov. It is updated each day with watches, warnings and other advisories.

2. Keep an eye on your child


Whether at the beach or pool, the National Drowning Prevention Alliance suggests parents designate a water watcher or water guardian.

“Even if you are with a group of people, have one adult whose main responsibility is to keep an eye on the kids in the water,” Adam Katchmarchi, the executive director of NDPA said.

Lifeguards should be additional, rather than sole supervisors.

First flip over onto your back to float. Keep your head above the water, remain calm and conserve energy.

If in open water with a current, swim perpendicular to its flow, parallel to the shore, until you reach an area free of the current. If you see someone who appears to be drowning, toss a flotation device into the water then alert lifeguards.


Swimming is an essential skill. However, 64% of African American children, 45% of Hispanic children and 40% of white children cannot swim.

This statistic becomes even more harrowing when it is revealed that of all nonswimming children, 87% plan to visit a beach or pool at least once during the summer.