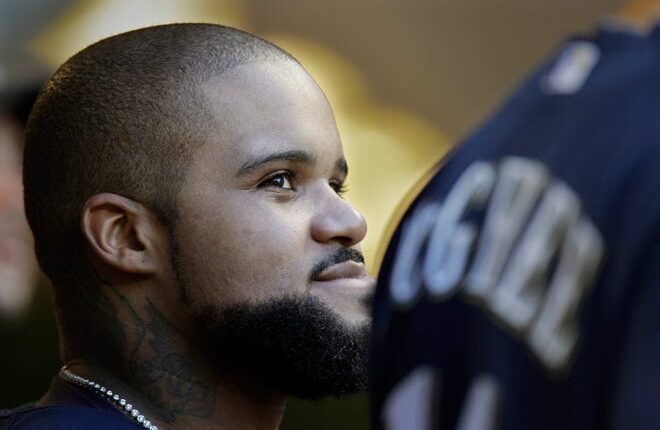 On Aug. 6, 2022, Prince Fielder will join many other Brewers luminaries in the Milwaukee Walk of Fame, an area commemorating the best in Milwaukee baseball history (the Brewers and the Braves).

Each inductee gets their own granite-shaped home plate etched into the walkways outside American Family Field, and it’s been in place since the park opened in 2001.

Wisconsin media members and team executives are polled each year, and to gain election, candidates must receive 65% of the vote. Fielders received 76%.

This is a separate, more prestigious group from the Wall of Honor, which commemorates a number of players in Brewers history who meet certain career benchmarks, namely 2,000 plate appearances, 1,000 innings pitched (or 250 games), winning a major MLB award (including Hall of Fame induction) or managing a pennant winning team.

Fielder already joined the Brewers Wall of Honor in 2018, which honors players quickly after their careers end.

Players must be officially out of baseball for five years before they can gain induction into the Walk of Fame.

Here are those players who appear on the Milwaukee Walk of Fame.

He remains the franchise’s career leader in slugging percentage and OPS, and his 230 home runs rank third all-time behind Robin Yount and Ryan Braun. He was a key part of Milwaukee’s surge back to the playoffs for the first time in 26 years in 2008, then led the team back to the postseason in 2011.

He’s played in the top-10 of numerous statistical categories in Brewer’s history, including hits, RBIs and games. His 212 home runs rank fourth in Milwaukee lore, and he made a number of flashy plays with his glove and arm as a corner outfielder.

Milwaukee Braves first baseman played for nearly the franchise’s entire duration in Milwaukee, with the Braves from 1953-62. Hit 239 home runs in that tenure and batted .285 with an .855 OPS.

The left-hander’s 32-inning scoreless inning streak in 1987 proved to be the signature run for a man who has an argument as the best pitcher in organization history. Despite a career abbreviated by injury, he’s third in Brewers history in strikeouts, shutouts and wins, and he’s got the best career WAR of any Brewers pitcher.

The five-time all-star shortstop was a big part of the Milwaukee Braves’ run to the 1957 World Series championship, with a home run in the series against the Yankees. He also played a central role in founding the Milwaukee Braves historical society.

Pitched for a decade with the Milwaukee Braves, recording a 3.53 ERA with 30 shutouts. He was named Most Valuable Player of the 1957 World Series (with two shutouts among three victories) and pitched a no-hitter in 1960, but he still might best be known as the pitcher who outdueled Pittsburgh’s Harvey Haddix in 1959 when Haddix was perfect for 12 innings, only to see the Braves win in the 13th, 1-0.

He was already 32 when the Boston Braves moved to Milwaukee, but the left-hander remained the best pitcher of his day. He led the league in wins seven times with the Milwaukee Braves, won the 1957 Cy Young, pitched two no-hitters and started two all-star games (with nine all-star years total).

One of the true icons of Milwaukee baseball history, Mathews played every season the Braves were in Milwaukee, earning all-star selection in nine seasons. The third baseman, with a career .896 OPS for the Braves, twice led the league in homers, twice took second in the MVP voting and appeared on the cover of the first Sports Illustrated.

More:These are the 20 all-time icons in Wisconsin sports history

General manager of the 1957 World Series champion Milwaukee Braves developed a litany of star talent within the organization and made shrewd trades for players like Burdette, Adcock and Red Schoendienst.

“Harvey’s Wallbangers” emerged from the ashes of a middling 1982 team, when the organization fired Buck Rodgers as manager and hired the West Allis native on an interim basis. Kuenn, credited as a laid-back leader who allowed the Brewers sluggers to be themselves, then oversaw the only World Series qualifier in Brewers history.

By WAR, he’s the fifth best offensive player in Brewers history, with 11 seasons playing at multiple spots on the infield diamond. He made four all-star teams with Milwaukee.

Steady defensive second baseman never made an all-star team or stole the show offensively, but the Wisconsin native spent all 17 years in Milwaukee and will forever be associated with Paul Molitor and Yount as the troika that brought winning baseball to the Brewers franchise.

Center fielder led the 1982 Brewers team in homers and still has the fifth-most in club history, with 208. He endures as one of the most popular players in club lore.

Mr. Baseball has been the voice of Brewers fans for over a half-century, and he’s essentially the face of the franchise. The Milwaukee native and former Milwaukee Braves player offers a unique radio broadcasting style layered with comedy, and he’s still going strong into his late 80s.

He’s the general manager who turned the Milwaukee Brewers into a winner, overseeing the club from 1978-91. His numerous successes include signing Larry Hisle, trading for Rollie Fingers, Pete Vuckovich and Ted Simmons in one maneuver and acquiring Don Sutton for the 1982 postseason run.

Authored the unforgettable go-ahead single in Game 5 of the 1982 ALCS and is among the top four players in career batting average, runs, hits and RBIs. After Yount, Molitor and Braun, he’s safely arguable as the next best offensive player in Brewers history.

The man who fiercely fought to bring baseball back to Milwaukee after the Braves left in 1965 became the principal owner of the Brewers in 1970. Eventually, he became the Commissioner of Baseball from 1998 to 2015.

One of the greatest to ever play the game, Aaron was an all-star every year as a Milwaukee Brave from 1955 to 1965, where he racked up 398 home runs on his way to becoming the game’s all-time leader with 755. He hit his final 22 with the Brewers, returning to Milwaukee for the 1975 and 1976 seasons.

More:What do you remember about the 1975 All-Star Game in Milwaukee 45 years ago today?

Hall of Fame came closer to the Brewers before the 1981 season and won Cy Young and MVP that season as the Brewers made their first postseason trip ever. His injury late in 1982 will forever be a Wisconsin sports “what if.” He posted a 2.54 ERA in four seasons with the Brewers at the end of his career.

“The Ignitor” fashioned a Hall of Fame career over 15 seasons in Milwaukee, where he batted .303 with an .811 OPS, including a 39-game hitting streak in 1987. A player who saw time at multiple spots on the diamond, Molitor made five all-star teams and didn’t slow with age, becoming World Series MVP and a two-time all-star for Toronto in his late 30s.

Inarguably the greatest player in Brewers history, a two-time MVP who first appeared on the scene as an 18-year-old shortstop in 1974 and finished his playing days as a center fielder. Played his entire 20-year career in Milwaukee, reaching the 3,000 hit milestone and earning induction into the Baseball Hall of Fame. He’s the franchise’s all-time leader in games played, hits, runs, doubles, triples and RBIs.