What Does Watson and Doubs’ Arrival Mean For Green Bay’s Ceiling? 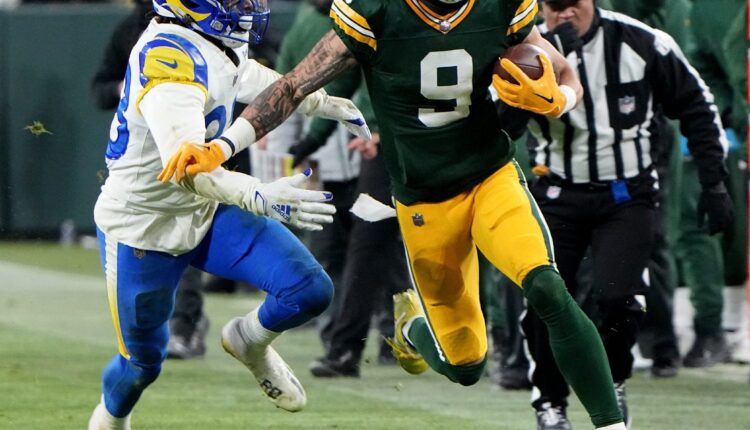 While the Green Packers’ late, improbable playoff push is bringing excitement to a season that has slid beneath expectations, many fans have expressed a sort of detachment toward the prospect of a postseason appearance. They argue that the 2022 Packers simply aren’t good enough to do anything in the postseason, should they somehow make it there. It’s a polar opposite perspective from the starved Detroit Lions and New York Jets fanbases. Still, it’s somewhat understandable given what Green Bay has become accustomed to: routine appearances as the top seed, followed by gut-wrenching heartbreak.

However, Monday’s win — the team’s most dominant performance that didn’t come against the Chicago Bears — gave fans the first taste of the emerging receiving duo that could raise Green Bay’s ceiling heading into January. Yes, rookie standouts Christian Watson and Romeo Doubs have taken the field together this year, albeit sparingly. However, Monday brought their first joint action since Watson’s seismic week 10 breakout against the Dallas Cowboys.

In the five games since Green Bay’s midseason skid, Watson has piled up 19 catches for 359 yards and an astounding eight touchdowns. In Doubs’ return from an injury suffered early in Green Bay’s Week 9 loss to Detroit, he reeled in five passes for 55 yards on only 23 snaps. Suddenly, Allen Lazard doesn’t have to do any heavy lifting, as evidenced by his whopping one reception last week. As a result, he’ll be free to play the block-heavy, zone-beating role he excelled in when Adams wore green and gold.

Joe Barry’s defense has miserably failed to meet lofty preseason expectations. Losing Eric Stokes and Rashan Gary also hasn’t helped. Mike McDaniel’s explosive attack is almost sure to outmatch that unit on Sunday. It would also struggle in potential playoff matchups with high-powered Philadelphia Eagles and San Francisco 49ers teams. The Packers have been good in recent years because of Aaron Rodgers, Davante Adams, and the offense. While it’s undeniable that Barry should and almost certainly will be fired for failing to turn a pretty solid batch of talent into a decent defense, the problem with this season has been that the offense hasn’t been anywhere near where it has to be to carry the load for a continuing franchise.

A lot of people want to blame Rodgers. Sure, he has shown signs of decline from the past two MVP seasons, but the offensive weaponry, largely composed of rookies, showed a marked decline from what Adams brought to the table. Receivers were not on the same side and struggled to stay healthy. Week 10 moved the needle significantly. Watson arrived. Now, with Doubs returning to the fold, this offense has the potential to start consistently scoring in the high 20s or even low 30s.

Doubs is a big body and fourth-round pick who took training camp by storm with his contested-catch ability. Watson is 6’5”, runs like a gazelle, and has the potential to take the top off the defense. They complement each other well and allow Lazard, Randall Cobb, and Robert Tonyan to handle the underneath work, which is where they excel. Crucially, suppose the well-oiled passing attack that has been gearing up in recent weeks is in full working order, which is the true strength of Green Bay’s offense. In that case, the backfield duo of dynamic star Aaron Jones and big bruiser AJ Dillon will continue to see healthier running lanes. Dillon, in particular, is the ultimate December back and will be a key asset for the pair of high-stakes divisional matchups in Green Bay — if they escape Miami, that is.

Heading into Sunday’s game, Watson and Doubs will have their hands full dueling the league’s top receiving duo, Tyreek Hill and Jaylen Waddle. It is a do-or-die game for the Packers, as every contest through February will be, should they continue to win. The thing about Hill and Waddle is that they will get theirs. Jaire Alexander and the Packers secondary will surely have their moments, but Miami’s team total of 26.5 on books seems like something Green Bay should prepare to have to surpass. Lucky for them, for pretty much the first time all season, that feels like something they can actually do.