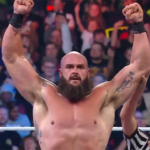 – Braun Strowman is a big Green Bay Packers fan, and he’s the subject of a new video from the NFL team. You can see the video below, which was posted to the Packers’ Twitter account:

This Monster of All Monsters bleeds green & gold.

– WWE has posted a couple classic Goldberg matches online in his famed WCW Title win over Hulk Hogan in 1998 and his Universal Championship match with Brock Lesnar at WrestleMania 33: