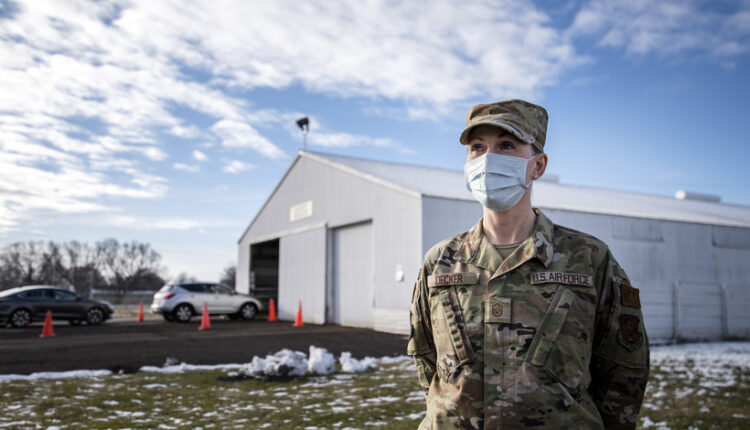 The US military is working to combat a different kind of enemy this year: a significant decline in the number of new recruits signing up for service.

“It really does impact the functionality of our units, our ability to accomplish our missions at the rate and at the skill level that we’re used to,” Hellenbrand said, who is the recruiting and retention battalion commander. “The workload is harder on people.”

Retired Maj. Gen. Marcia Anderson of the Army Reserve, who is originally from Beloit, said the military has been struggling with recruitment for years. She said part of the decline comes from fewer people being able to meet eligibility requirements.

“Some of them don’t make the cut because they have health issues, they can’t pass the entrance tests, or they have something else in their background, they’re not physically fit,” she said during an interview in September. “So that’s even kind of narrowing the aperture for us in terms of people we can recruit and enlist.”

In Wisconsin, Hellenbrand said opposition to the COVID-19 vaccine has been an issue brought up by potential applicants and their parents. She said the Guard’s deployment in support of law enforcement during 2020 protests in cities like Madison, Milwaukee and Kenosha was another polarizing issue that impacted the way people view the organization.

“Some people have strong opinions as to whether the National Guard should be activated in certain instances. So we’ve heard about that from the public,” she said.

Both Hellenbrand and Anderson said recruiters are also reporting that concerns over instances of sexual assault and suicide in the military have also made some people opposed to serving — especially in response to media coverage of high profile incidents like the 2020 murder of Spc. Vanessa Guillen at Fort Hood in Texas.

“We are a people organization. Diversity is our strength,” Anderson said. “But a sense that we are not welcoming or that we don’t take care of people can affect our ability to recruit and retain people. So it has been a focus.”

Anderson said Army officials have worked to update training programs for service members and emphasize that every soldier plays a role in preventing harassment and assault. She said there is also more focus on holding leadership accountable if they don’t create an environment in their unit that emphasizes reporting incidents and supporting victims.

The Wisconsin National Guard has faced scrutiny on this issue from the public and elected officials after a 2019 study found the Guard mishandled misconduct allegations and didn’t prioritize the needs of victims.

Hellenbrand said the issue is one that recruiters are hearing from potential members and their families. She said the Guard has learned “hard lessons” since 2019, but she’s confident there has been a change in culture.

“Leaders are intentionally mitigating risk factors during events that could place our troops at risk,” he said. “We no longer host events where alcohol is the centerpiece. We’re much more family focused — we create family friendly environments. Safety is something that is talked about, safety of one another. And I think that overall, we’re a much more professional force.”

She said the Guard has invested in victim advocates, consistent training and other programs that can help build a more inclusive environment.

Anderson, who was the first African American woman to reach the rank of major general in the Army Reserve, said she feels like the culture of the military has improved since she first joined in 1979.

“Myself and my female colleagues, we actually do talk about this, and we do feel that change is occurring. Maybe not as fast as anybody would want to see, but it certainly is occurring,” she said.

Anderson said one benefit for women in the military is the assurance that they’re paid the same as their male counterparts.

“You know what everyone is making, which you can’t say in a lot of our corporate organizations in this country. I think those things are attractive, and they see that there’s a career path and the career paths are pretty well-defined, so it’s not mysterious,” she said. “I think for women that’s refreshing, it’s empowering and I can certainly see why they would be interested in joining that kind of organization and getting that kind of opportunity.”

Hellenbrand said in Wisconsin, the Guard recognizes they’re still working to address these issues. But she said they’re hopeful public opinion of the organization will rebound as Guard members continue to respond to natural disasters and support communities in the state.

Listen to the WPR report here.

With recruitment down nationally, military officials say is working to address concerns of potential recruits and their families was originally published by Wisconsin Public Radio.