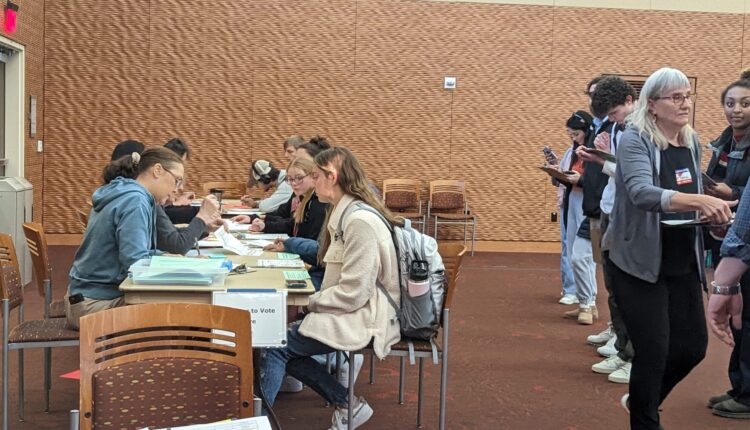 WASHINGTON — Young Black and Latino voters were critical in holding off the Republican “red wave” in several battleground states for U.S. Senate seats and in tight U.S. House races in the midterm elections, according to analyses by researchers and grassroot organizations.

Young, diverse voters between the ages of 18 and 29 had the second-highest youth voter turnout in almost three decades, with youth voter turnout at 31% in the nine battleground states of Florida, Georgia, Michigan, North Carolina, New Hampshire, Nevada, Ohio, Pennsylvania and Wisconsin, according to estimates by the Center for Information and Research on Civic Learning and Engagement, an institute at Tufts University.

Control of the Senate is not yet decided but is down to three races — Nevada, Arizona and a runoff election in Georgia — and control of the House is still unknown. Earlier predictions and polling had forecast a Republican “red wave” leading to a takeover of Congress at least in the House.

The center, which studies young voters, also found in analyses of exit polling data that 89% of Black youth and 68% of Latino youth voted for a Democratic U.S. House candidate.

In the Wisconsin governor election, Democratic incumbent Tony Evers won his reelection by a slim margin, 51% to 48%. About 70% of young voters backed Evers compared to 30% for his Republican challenger Tim Michels, the center found in analyzing exit poll data.

Adding to the influence of the youth vote, this is also the first election cycle that members of Gen Z, the generation born between 1997 and 2012, are eligible to run for Congress. Rep.-elect Maxwell Alejandro Frost, (D-Fla.), won his race this week, at 25 becoming the first Gen Z member of Congress and also the first Afro Cuban member.

Compared to earlier generations, Gen Z is the most diverse, with more than half people of color. In addition, 1 in 5 members of Gen Z identify as LGBTQ, according to a Gallup survey.

In the Georgia U.S. Senate race, which is heading to a runoff election next month, young voters backed U.S. Democratic Sen. Raphael Warnock by 63% to 36% compared to his GOP opponent, Herschel Walker, according to estimates from exit polling from the Center for Information and Research on Civic Learning and Engagement.

Héctor Sánchez Barba, the executive director and CEO of Mi Familia Vota, an organization that works to build Latino voting power, said during a briefing with reporters that the Latino voting bloc is a young population, with 30% of Latino voters ranging in ages from 18 to 29, which is “10 years younger than the national average.” He added that 30% of Latinos are under the age of 18.

“So when we’re talking about the Latino vote, we’re not always talking about the transactional way that sometimes our vote is analyzed in swing states,” he said. “We as an organization are every day in the communities investing in the long-term democracy.”

Gutierrez said early on, Latino Victory worked on the ground in key states like Nevada, Arizona, New Mexico, Colorado and Texas to endorse Democratic candidates, along with states like Oregon that have emerging Latino populations.

“Latino voters are delivering for Democrats and a formidable pillar of the Democratic coalition, and we need the investment, ongoing continued investment that happens year to year, not a helicopter in at the point of the election cycle,” she said.

Voto Latino, an organization that works to register Latinos to vote, found that in election eve polling in Arizona, Latinos backed Democratic U.S. Sen. Mark Kelly over GOP challenger Blake Masters. As of 4 p.m. Eastern on Thursday, Kelly has a lead over Masters, with 51% of the vote with 70% of votes reported.

In Nevada, Latinos in polling supported Democratic U.S. Sen. Catherine Cortez Masto over her GOP challenger Adam Laxalt, according to Voto Latino. Final results of that race will not be known until sometime next week, but as of 4 p.m. Eastern Thursday, Cortez Masto was trailing Laxalt with 47.6% of the vote compared to his 49.5%, with 83% of votes reported.

Latinos also were thought to have contributed to important wins in U.S. House races such as in Colorado, where Democratic U.S. Rep.-elect Yadira Caraveo, a pediatrician and state representative, beat her GOP challenger Barbara Kirkmeyer, a state senator, in Colorado’s newly drawn 8th Congressional District. The district is split evenly between the parties in voter affiliation, and has the highest percentage of Latinos among congressional districts in the state.

Caraveo will become the first Latina to represent Colorado in Congress.

“Latino voters are also instrumental in our efforts to increase Latino representation,” Gutierrez said. “As anti-immigrant and anti-Latino policies and rhetoric grow in the Republican Party, we need more Latino voices at all government levels to ensure our community’s voice is heard.”

Beatriz Lopez, the chief political and communications officer at the Immigration Hub, said in a statement that Democrats should look at the success of Fetterman’s campaign in courting Latino voters.

She said he ran a pro-immigration campaign and his wife, Gisele, who is a “former Dreamer and champion for hard-working immigrants in her state — is a recipe for Democrats on how to talk the talk, counter the attacks, and win big.”

Dreamers is a term used to describe young undocumented immigrants who were brought to the U.S. Those who are enrolled — about 800,000 — in DACA are shielded from deportation. Immigration advocates and DACA recipients have lobbied Congress to create a permanent pathway to citizenship for them, especially as a federal judge considers a case that could outlaw the program.

Clarissa Martinez De Castro, the vice president of UnidosUS Latino Vote Initiative, said that in the midterm elections, Latinos overwhelmingly voted for Democrats in every state except for Florida, where Latinos voted to reelect Republican U.S. Sen. Marco Rubio, who is Cuban American, and Gov. Ron DeSantis.

Republicans have invested in the Sunshine State for decades, working to court the Latino vote in Florida, primarily by painting Democrats as communists, playing on the fears of regime and dictators that many Latinos in the state previously fled from, said Kenny Sandoval, the vice president of campaigns and partnerships at Voto Latino.

Sandoval expressed frustration that despite Latinos continuing to vote for Democrats, engagement in the community is often an afterthought.

“Latino voters and especially young Latino voters are among the most essential communities, and the Democratic coalition will be the fastest growing, yet what we saw was Latino voters, and the campaigns who engage them, remained an afterthought for Democratic fundraisers throughout the election cycle because they bought into the false and unsupported argument that Republicans have made serious inroads in the Latino community,” he said.

“As voters, Hispanics generally reject extremes and taking away rights from people, as illustrated by these voters’ views on abortion, for example, where 76% have stated that regardless of their personal belief, they do not believe abortion should be illegal or that that decision should be taken out away from everybody else,” she said.

Yanira Merino, the national president of the Labor Council for Latin American Advancement, said many Latinas went to the polls in the “wake of the attack on reproductive rights,” after the U.S. Supreme Court overturned the constitutional right to abortion access this summer.

LCLAA is a nonprofit, nonpartisan Latino organization affiliated with the AFL-CIO labor organization and the Change to Win labor federation.

“It’s imperative to note the Latino vote must not be taken lightly and that investment into engagement of this group is a must, and it cannot be an afterthought,” she said.