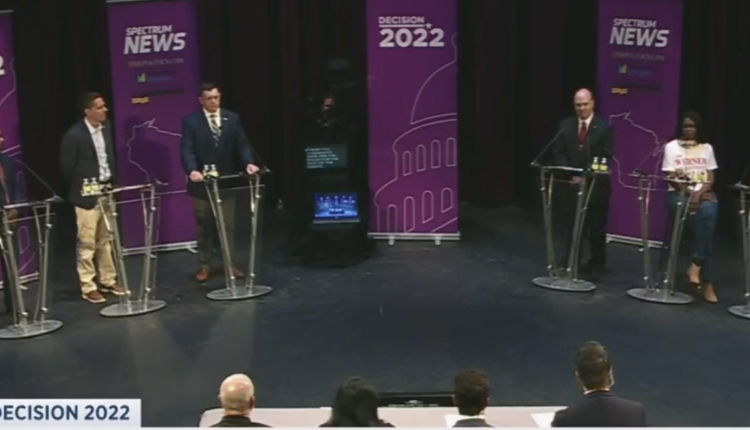 The crowded primary race to be the Republican candidate for lieutenant governor this fall includes eight candidates from a variety of backgrounds, but support for Wisconsin’s 1849 felony abortion ban and tax cuts and continued opposition to measures instituted to stop the spread of COVID-19 in 2020 have dominated the race.

The position of lieutenant governor has few official duties, but the candidates — which include two members of the state Senate, the former mayor of Lancaster and an insurance agent — have said their first goal is to help the Republicans beat Gov. Tony Evers in November.

David King, a pastor and founder of the Wisconsin God Squad, a community organization based in Milwaukee, said at a candidate debate on July 21 at UW-Milwaukee that he’s running because the state needs leaders who can make “tough decisions for the people.”

King’s campaign did not respond to an interview request. He previously ran and lost races for the Assembly in 2010, the Senate in 2012 and the U.S. House of Representatives in 2014.

His platform includes getting so-called critical race theory — a graduate school-level framework that looks at American history and institutions through a lens of race — out of school curriculums and “no more state mandates.”

Under Walker, he worked in the Department of Workforce Development as the director of strategic workforce initiatives and he worked on Thompson’s staff as a deputy director.

“I believe that I’m ready to serve with the next Republican governor to cut the size, the costs, taxes and regulation of state government, to end taxation of retirement income and to get tough on crime,” Martin, who did not respond to an interview request, said in the debate.

Sen. Roger Roth (R-Appleton) has been in office since 2014. He also served in the Assembly for one term from 2006-2008 and is a member of the Wisconsin Air National Guard. His campaign did not respond to an interview request.

In the most recent legislative session, Roth authored a bill that would have split Milwaukee Public Schools into at least four different districts, a policy that the three Republican gubernatorial candidates have endorsed.

“People are frustrated,” he said in the debate. “I see it all over the state. And I look forward to being able to help our next governor on education reform and on taxation reform to move our state forward.”

Sen. Patrick Testin (R-Stevens Point) has represented his district in the Senate since 2016. In a debate, he said he’s running to “enact a new era of conservative reforms that will propel the state forward.”

Testin’s campaign manager said he was unavailable for an interview, but his website touts preventing COVID-based shutdowns, promoting charter schools, fighting election fraud, defending the Second Amendment, keeping abortion illegal and standing up for law enforcement as his main issues.

“After years of utterly failed leadership from the administration of Tony Evers and Mandela Barnes, we need a drastic change to fix the path forward that Wisconsin is charting and right the ship,” his website states. “We need strong, conservative leaders that aren’t afraid to take a stand, fight for policies that better the lives of all Wisconsinites, and stop harmful policies of government overreach.”

David Varnam, a former alderman and mayor of Lancaster, said in the debate he has the experience to help lead Wisconsin.

“We are at a pivotal moment, I believe,” he said. “Inflation is high. Gas prices are high. People are looking for help from their government, and I think that we need all hands on deck.”

Varnam did not respond to an interview request.

Cindy Werner is the Wisconsin state ambassador of the conservative Frederick Douglass Foundation. The only woman in the primary, she’s been vocal in statewide Republican efforts to spread conspiracy theories about the 2020 presidential election.

Werner has filed a lawsuit against five of the state’s largest cities, Madison, Milwaukee, Racine, Green Bay and Kenosha, because they accepted grant money to help fund election administration in 2020. Werner also attended and sat on stage at a rally held by Ramthun at the state Capitol in February to promote his bill to decertify the results of the 2020 election, a move legal experts say is impossible and unconstitutional.

Werner said she could respond to questions from the Wisconsin Examiner by email, but never responded to those questions.

Small business owner Jonathan Wichmann says he’s the best candidate in the primary because he was the first to enter the race after he “saw things coming” about inflation and the economy. He also says he thinks there’s a “financial nuclear bomb” coming down the road.

Wichmann says he’s perfectly equipped to complement each of the three main Republican candidates for governor and help them overcome their shortcomings.

“As a lieutenant governor candidate, I would complement whichever candidate wins the primary to give a fighting chance to beat Tony Evers,” he tells the Wisconsin Examiner. “[Former Republican Lt. Gov. Rebecca] Kleefisch, if I’m not there on the ticket with her, she comes off as disingenuous, inauthentic. There’s voters that cannot stand her. Tim Michels, people feel like he’s Trump’s candidate and trying to buy the election, he’s only lived here part time. I know the issues inside and out. [State Rep. Tim] Ramthun, should he progress, people have framed him as a one-issue item and people see him as not that strong on the economy and job creation.”

Wichmann says he’s in favor of legalizing medical cannabis in Wisconsin, a policy that all three gubernatorial candidates have opposed — though he says he thinks they’ve only done this because they’re “scared.”

Other than cannabis, he says helping farmers and privatizing the state’s unemployment insurance system would be his main policy goals if elected.

“The role is what you make of it,” he says. “I would continue what I’m doing as a candidate. Advocating for the policies I believe would benefit Wisconsin. Job growth, farmers, I’m concerned about food independence, get farms out from the debt burden, find new markets our farmers can compete in and maintain constitutional freedoms.”

Kyle Yudes is an insurance agent from Eau Claire, who says he’s running for office because of COVID measures instituted in 2020.

“In March of 2020, our freedom was stolen from us. And no one stood up for us,” he said in the debate. “I am running to hold those responsible for the last two and a half years accountable. And with the governor’s help, we’ll do that.”

Yudes did not respond to an interview request.

In California, Abortion Could Become a Constitutional Right. So Could Birth Control.