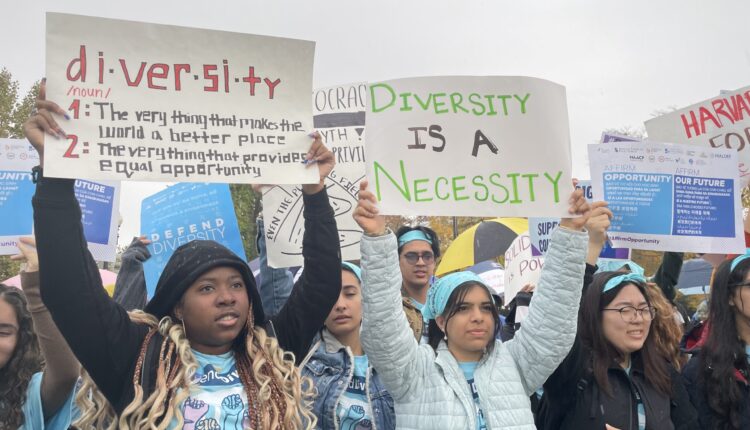 WASHINGTON — The onset of rain did not deter students and supporters of affirmative action from protesting Monday morning outside the U.S. Supreme Court while justices considered two cases that could reshape the college admissions process.

“It’s not a secret that if you eliminated race conscious policies, it would further diminish the number of students of color on college campuses, particularly women of color in higher education,” Fatima Goss Graves, the president and chief executive officer of the National Women’s Law Center, said outside the court.

A conservative 6-3 majority could overturn court precedents on affirmative action. The two cases, brought by Students for Fair Admissions, challenge the admission process that considers race as a factor when admitting students at Harvard University and the University of North Carolina, arguing that Asian American students have suffered discrimination in those admissions processes.

The Harvard case argues that Asian American students are less likely to be admitted to Harvard than white, Black or Latino applicants.

The UNC case argues that the university’s consideration of race in its admissions process violates the Constitution and discriminates against white and Asian American applicants by giving preference to Black, Native American or Latino applicants.

Both universities have argued that the use of affirmative action in admissions has helped the institutions provide equitable opportunities for Black, Latino, and other students of color who may have not had the same educational opportunities as their white peers due to systemic racism.

SFFA is backed by Edward Blum, a conservative activist who for decades has launched dozens of lawsuits challenging race-based laws such as affirmative action and voting rights.

Many of the speakers outside the court criticized Blum. They focused on the unity between communities of color and discussed how race cannot be separated from someone’s life story and should be taken into consideration in the admissions process.

Maya Wiley, president and CEO at The Leadership Conference Education Fund, which organized the event, said it’s important for all communities of color to stand together to support affirmative action.

Sumi Cho, director of strategic initiatives at the African American Policy Forum, which is a social justice think tank in New York, said that “affirmative action is not about providing special assistance for those harmed by racism, but about clearing away the obstacles and systemic barriers that lie in their path.”

This is not the first challenge to affirmative action in college admissions. In 2014, the Supreme Court ruled that “[s]tates may choose to prohibit the consideration of racial preferences in governmental decisions.”

Christina Huang, co-lead of UNC for Affirmative Action, called out the notion that higher education should take a colorblind approach to admitting applicants.

“Ignoring race is not being colorblind, it’s putting on rose-tinted glasses to wash out the racial discrimination that has and continues to bar students of color and people of color from equal opportunities,” Huang said.

Chelsea Wang, co-educational political chair of the Harvard-Radcliffe Asian American Association, said if the Supreme Court were to overturn affirmative action, Asian Americans would not benefit, and would instead be harmed by its removal.

“The notion that affirmative action discriminates against Asian applicants is a malicious myth, and its abolition would only hurt disadvantaged Asians,” Wang said.

A study by the University of Washington and the Brookings Institution, a left-leaning think tank, found that states that banned affirmative action in their admissions process have seen a long-term decline in Black, Latino, and Native American students admitted and enrolled at their public universities.

Kylan Tatum, co-educational political chair at the Harvard-Radcliffe Asian American Association, said that Asian Americans like himself are being weaponized, and the group bringing the challenge to the Supreme Court “has attempted to portray Asian Americans as a monolithic group universally disadvantaged by affirmative action.”

Samaga Pokharel, an 18-year-old student from Harvard University, said she is concerned for future generations if affirmative action is struck down by the court.