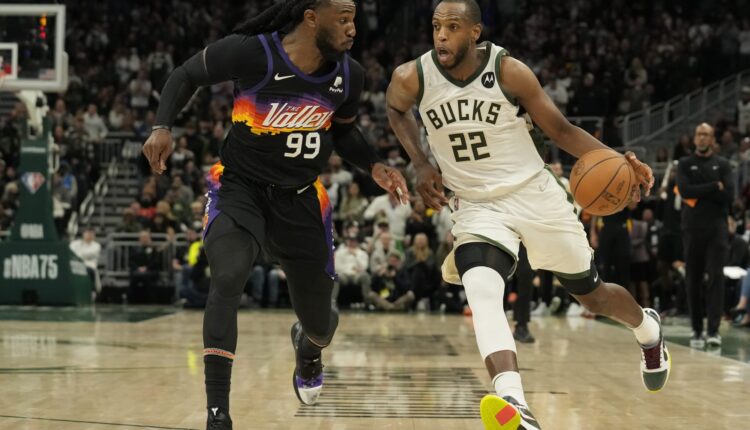 Milwaukee Bucks fans got great news on Tuesday. Eric Nehm of The Athletic reports that Khris Middleton and MarJon Beauchamp have been assigned to the Wisconsin Herd for today’s practice.

Many Bucks fans have been wondering when we would get an update on Middleton, and with him going to the team’s G League affiliate today, the wheels are in motion for his return. Middleton has been out since early July recovering from surgery on his wrist.

Reactions to Khris Middleton’s nearing return to the Milwaukee Bucks

The Bucks have already been scary for the rest of the league this season with their perfect 6-0 start. They’re about to become even scarier with another All-Star close to his return. It’s unknown how far along Middleton is with his rehab process, but regardless, his returning to basketball activities is big for the Bucks.

Milwaukee has been able to hold down the fort without Middleton early in the season. However, with Jordan Nwora starting to struggle and Beauchamp being assigned to the G League, Middleton’s impending return couldn’t come at a better time for the team.

Middleton’s return will help the team return to the roles they’re used to playing. It allows some pressure to be taken off Jrue Holiday offensively, who has usually been better as the team’s third scoring option than the second option he’s had to be without Middleton.

Middleton will boost the Bucks in perimeter shooting, something they have struggled to get going without him this season. The Bucks currently rank 24th in the NBA in 3-point percentage, shooting 33.5 percent as a team, per NBA.com/stats. Middleton will help in that department as a career 39.2 percent shooter from deep.

Middleton will help the team offensively just with his presence. Of course, the defense will still key in on shutting down Giannis Antetokounmpo as the team’s best player. Still, Middleton adds another opposing weapon defenses will have to factor into their game plans. With defenses focused on stopping Antetokounmpo and Middleton primarily, open looks should be there for Milwaukee’s role players.

Middleton had his third All-Star season in four years last year. Middleton averaged 20.1 points, 5.4 rebounds, and 5.4 assists for the team, though his shooting numbers dropped to some of the worst of his career. It can’t be determined whether or not Middleton’s wrist was the cause of his drop in percentages, but it wouldn’t seem like a coincidence if that were the case.

Middleton will add another lengthy defender to the Bucks, who already are the NBA’s best defense. It remains to be seen who’s spot Middleton will take in the starting lineup, but that could be one of the most important decisions surrounding the team.

While not producing numbers that jump out offensively, Jevon Carter has been huge for the team on defense. Carter in the starting lineup has allowed the team to be versatile with defensive assignments for Jrue Holiday. When Middleton returns, Bucks head coach Mike Budenholzer should continue to allow Carter to start, regardless of his numbers on offense.

Middleton coming back will help the Bucks in a magnitude of ways. Even though they’re undefeated playing without him, adding another All-Star to your lineup can never hurt.

Stay tuned to see when Middleton officially returns to Milwaukee and how he will perform.