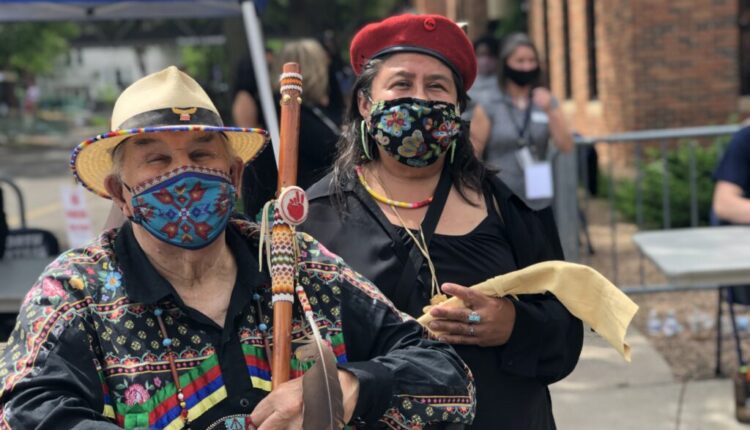 Clyde Bellecourt, one of the most influential leaders in the Red Power movement and fight for Native American civil rights, died Tuesday at his home in Minneapolis. He was 85.

His legacy encompasses high-profile, sometimes militant acts of civil disobedience alongside peaceful efforts to found schools, improve health care and nurture Native culture in the Twin Cities and around the country.

Over the course of his life, Bellecourt survived being shot at close range, multiple incarcerations and a heart attack. He was diagnosed with prostate cancer three years ago, which eventually spread to the rest of his body.

“He was an ogichidaa, which in our language is a warrior,” said Michael Fairbanks, chairman of the White Earth Nation, of which Bellecourt was a member. “He represented us in a good way and he was there to help all Native Americans across Turtle Island (North America).”

American Indian Movement founders including Bellecourt, Dennis Banks, Russell and Bill Means and others rose to national prominence leading armed occupations of government buildings in the 1970s to protest the United States’ failure to honor its treaty obligations.

Most famously, Bellecourt and AIM activists occupied the town of Wounded Knee on the Pine Ridge Reservation in South Dakota in 1973. They held the town for 71 days, exchanging gunfire with federal law enforcement. Two people died.

“This was the very best time of my life, and I knew it,” Bellecourt recalled in his 2016 autobiography, “The Thunder Before the Storm,” the English translation of his Ojibwe name, Neegonnwayweedun.

Bellecourt and AIM also established programs to provide direct services to Native people in the Twin Cities and cities across the country. They started two schools for Native children, an urban health clinic, a legal rights center and the AIM patrol, which monitored the police for misconduct.

Bellecourt was one of the last surviving founders of AIM, but the group’s work lives on, said Lisa Bellanger, co-chair of the National American Indian Movement and member of the Leech Lake Band of Ojibwe.

“Their vision continues,” Bellanger said. “Their vision of ensuring that our children have the opportunity to learn their identity, language and culture and that we have an equitable place in society.”

Bellecourt was born on the White Earth reservation in northwestern Minnesota in 1936, the middle of 12 children.

He grew up snaring rabbits and harvesting wild rice and sugar beets on the reservation until he was arrested at 11 years old for truancy and delinquency. He was sent to the Red Wing State Training School, a correctional facility that was rife with physical abuse and far from his family.

He was 16 when he was released from Red Wing for good and allowed to rejoin his family. By then, they had moved to Minneapolis, part of a massive migration of Native Americans in the 1950s and 60s to urban areas across the country, spurred by the federal government’s “Indian Relocation Act.”

The United States paid Native people to leave their reservations for better opportunities but often left them stranded in unfamiliar cities with few job prospects, inadequate housing and an unwelcoming white majority.

When he arrived in Minneapolis, “all doors seemed closed to me. I didn’t see much of a future,” Bellecourt recalled in his autobiography. “I was used to jail now and thought … that this was just the way life worked for Indian people.”

At 25, Bellecourt ended up incarcerated for burglary and robbery. But his time in Stillwater Prison laid the groundwork for his lifelong activism. There he met Banks and Eddie Benton-Banai, both now deceased.

Benton-Banai introduced Bellecourt and other Native inmates to Native spirituality, history and language, and became an AIM spiritual adviser.

“We knew we were Indian people, but we didn’t know what that meant,” Bellecourt wrote in his autobiography. “We had been raised in the foster system, the boarding school system, the criminal justice system and by parents who’d had the Indian beaten out of them.”

Both of Bellecourt’s parents survived boarding schools, where they were brutally punished for speaking Ojibwe. Bellecourt recounted in his book how his mom walked with a limp as an adult because she was forced to scrub floors with sacks of marbles tied to her knees for speaking Ojibwe. She chose not to speak it with her children.

Learning about his history and culture in prison lit a spark for Bellecourt: “I really started feeling good about being an Indian. I stopped thinking about killing myself.”

“Although we couldn’t explain it at the time, our people were suffering from historical trauma,” Bellecourt wrote. “They were hurting and scared because of the things that had been done to them — and carrying the pain from the suffering of their parents, grandparents and ancestors.”

In 1968, Bellecourt and other Native activists started meeting to discuss how to secure better treatment of Native people along with adequate housing, job opportunities, education and health care.

They formed the AIM Patrol, where young Native men and women in red T-shirts, walked the streets to keep watch for police brutality. They then established the Legal Rights Center with Black activists, a group that continues to provide free legal representation to juveniles and adults in Minneapolis and advocates for criminal justice reforms.

To respond to the racism Native children faced in school and poor educational outcomes, AIM founded one of the first Native-run schools in the country — Heart of the Earth Survival School and Red School House. This was before the federal Indian Self-Determination and Education Act of 1975 that established Native tribes’ right to control their own educational activities.

Bellanger attended Heart of the Earth and her mom, Pat Bellanger, a prominent AIM member, worked at Red School House and in the Legal Rights Center.

The schools provided a sanctuary for Bellanger and hundreds of other Native students as well their parents.

“The most important thing for Uncle Clyde was to ensure that our language, culture, teachings and traditions flow into the future,” Bellanger said. “When he would see children participating in ceremony, when he would hear children speaking or singing in their language, he just thought that was the greatest thing. You couldn’t get a bigger smile.”

For a time, Bellecourt and AIM ran Little Earth, the country’s only Native-prefence federal housing project in an urban area, which continues to operate, with more than 200 units on nearly 10 acres in Minneapolis.

From their early years, AIM leaders showed their adeptness at winning media coverage through imaginative political actions which grew confrontational and at-times militant through the 1970s.

One of the earliest was the “Red Ribbon Grand Jury,” in which they put police and other government officials on trial for civil rights abuses. They set up a mock courtroom in their offices with name plates for the police chief or superintendent of schools. When those leaders invariably refused to show up, AIM would conduct the proceedings without them, calling witnesses and legal experts.

In 1970, Bellecourt scraped together enough money to fly from Minneapolis to Denver, where he led a takeover of the Bureau of Indian Affairs building in Littleton, Colorado to demand that Native Americans be put in charge of the BIA.

In 1972, Bellecourt helped organize a national march on Washington dubbed the “Trail of Broken Treaties” culminating in the occupation of the BIA headquarters there.

Those actions were prologue to their most infamous stand: the 71-day armed occupation of the town of Wounded Knee on the Pine Ridge Indian Reservation, the site of the 1890 massacre of nearly 300 Lakota people by the United States Army.

AIM activists held the town to protest corrupt tribal politics and the United States’ failure to uphold treaty obligations. It was a high point in the Red Power Movement and inspired widespread public support for Native Americans, but the occupation was also violent, with activists exchanging gunfire with federal agents. Two people died.

A federal judge would eventually dismiss charges against Banks and Russell Means after a high-profile trial in St. Paul citing governmental misconduct. No charges were brought against Bellecourt.

Through the late 70s, the federal government passed a series of laws ushering in a new dawn for tribal sovereignty and ending the so-called Termination Era characterized by the government’s efforts to eliminate tribes and assimilate Native people into the white mainstream.

Bellecourt got his spirit name Neegonnwayweedun in 1973, shortly after he was nearly killed.

He had just been shot at point-blank range on the Rosebud Reservation by fellow AIM leader Carter Camp, who Bellecourt believed was working for the FBI, according to his autobiography.

The bullet ripped through his pancreas and nearly hit his spine. Doctors told him they believed he was dead for a time and the news even reported that he had been killed. His wife, Peggy, turned on the television from their home in Minneapolis to news that he was dead.

He was flown from Winner, South Dakota to the University of Minnesota hospital to recover. Soon after, Benton-Banai held a “making-of-a-chief ceremony” for Bellecourt for his years of activism fighting for women and children.

Benton-Banai fasted for three days in the woods of Wisconsin seeking a vision for what Bellecourt’s spirit name is.

“In his dream he could see sheets of lightning to the west,” Bellecourt recalled in his autobiography. “All of a sudden that storm got close to him and a bolt struck nearby. The crack of that lightning in his dream startled him and when he awoke the trees were blowing back and forth and it started to rain.”

Bellecourt’s activism extended long after the end of the Wounded Knee occupation. In 1977, he traveled with a delegation to the United Nations to give testimony on a world stage about the United States’ mistreatment of Native Americans.

He path wasn’t always straight: He returned to prison in the 1980s for drug dealing. But when he returned to Minneapolis, he picked up his activism.

In 1993, he helped lead large protests against police brutality in Minneapolis after two Native men were put in the trunk of a squad car and driven to the hospital.

In his later years, he also encouraged young activists to find their own voices.

“Clyde was really good at finding out what you were good at and then giving you the space to do that,” said Binesikwe Means, a member of the Oglala Lakota Tribe whose father, Bill Means, co-founded AIM with Bellecourt. “As he was an uncle to me, he was an uncle to many people within our community.”

Bellecourt is survived by his wife, Peggy, four children and many grandchildren. A ceremonial fire is burning for him at the Minnesota Indian Women’s Resource Center in Minneapolis and a memorial is being planned.

Minnesota Reformer is part of States Newsroom, a network of news bureaus that includes the Wisconsin Examiner and is supported by grants and a coalition of donors as a 501c(3) public charity. Minnesota Reformer maintains editorial independence. Contact Editor Patrick Coolican for questions: [email protected] Follow Minnesota Reformer on Facebook and Twitter.