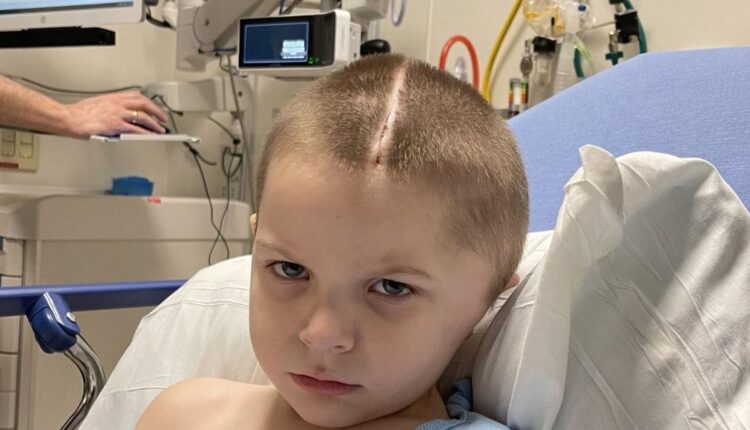 Last week’s return to school was short-lived for 7-year-old Silver Lake resident Alex Hook, whose ebb and flow of recovery and setback after a traumatic brain injury is being followed around the world by people who sympathize with his plight.

“It brought some normality into his life,” said Michelle Koertgen, Alex’s aunt who serves as the family spokesperson. “He missed his friends and teachers.”

It was the first time Alex, Kirbey and Caryn Hook’s son, was able to visit the school in person since September when a piece of rebar was ejected from a lawn mower during a recess at Riverview Elementary in Silver Lake, which was picking up grass from the school mowed reasons to hit Alex.

Alex suffered a fractured skull and bleeding in the brain. He was airlifted to the intensive care unit at Children’s Wisconsin Hospital in Wauwatosa, underwent multiple surgeries and once placed in a medically induced coma.

As the fluid swelling in his brain improved, surgeons were able to replace the missing piece of his skull with a metal plate, greatly improving Alex’s quality of life and allowing him to go back to school.

Within an hour of leaving school, Alex’s temperature had risen to 43 degrees and he was shaking uncontrollably. It was a telltale sign of an infection – which the doctor had warned about weeks after the operation.

“Unfortunately, they had to take that (section of the scalp) back out,” Koertgen said. “It’s like taking two steps forward and then one step back. It’s heartbreaking.”

Alex suffered significant blood loss during the surgery, which caused his heart rate to increase, Koertgen said. He received a blood transfusion and now his heartbeat is normal.

As of Monday, he was on a recovery floor receiving antibiotics to eliminate Staphylococcus aureus.

“They’re going to put a picture line on him so my sister can give these antibiotics intravenously at home,” Koertgen said.

Doctors fitted Alex with a new helmet and will eventually undergo another operation to replace the plate. A parent can sleep next to him in the hospital room.

“It’s very traumatizing for him and it hurts him a lot,” said Koertgen. “Mostly he is a soldier. He wakes up with nightmares and crying. It’s just horrific.”

Back to school on hold

Alex won’t be able to return to school “for quite a while,” Koertgen said.

“Once he’s out of the hospital, my sister will be consulting with the therapist and the school to see if there’s anything they can do to make sure he doesn’t fall too far behind educationally,” Koertgen said. “He’s taken some Zoom classes before.”

Fundraising efforts for Alex’s medical expenses have raised approximately a quarter million dollars to date. The family has received donations from every state in the United States, as well as South Africa, Germany and Ireland.

Updates on his progress are available online at https://www.gofundme.com/f/6-year-olds-devistating-accident-during-recess.

In 1944, during World War II, the Allies launched the first of four battles for Monte Cassino in Italy; The Allies were ultimately successful.

In 1955, the USS Nautilus submarine made its first nuclear-powered test run from its berth in Groton, Connecticut.

In 1961, President Dwight D. Eisenhower delivered his farewell address in which he warned against “the acquisition of undue influence by the military-industrial complex, whether sought or unwanted.”

In 1966 the Simon & Garfunkel album “Sounds of Silence” was released by Columbia Records.

In 1994, the 6.7 magnitude Northridge earthquake struck southern California, killing at least 60 people, according to the US Geological Survey.

Ten years ago: Italian officials released a recording of an irate Coast Guard officer demanding that Captain Francesco Schettino, commander of the stranded Costa Concordia, reboard the ship to lead the evacuation after the ship crashed on Jan. 13 in a reef was rammed.

Five years ago: Donald Trump’s election as Secretary of the Interior, Rep. Ryan Zinke, dismissed the president-elect’s claim that climate change was a hoax, telling his Senate confirmation it was undeniable that environmental changes are affecting world temperature and human activity was a main reason.

A year ago: Russian opposition leader Alexei Navalny was arrested at a Moscow airport while returning from Germany, where he had spent five months recovering from nerve agent poisoning, which he blamed on the Kremlin.

A year ago: US defense officials said they were concerned about an insider attack or other threat from military personnel involved in securing the inauguration of President-elect Joe Biden; The concerns prompted the FBI to screen all 25,000 National Guard soldiers who came to Washington for the event.