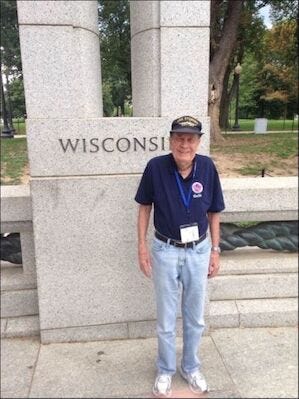 Cass Francis Mack, 95, of Milwaukee, Wisconsin passed away on October 10, 2022, at Angel’s Grace Hospice. He was born on May 30, 1927, in Detroit, Michigan to Cass Francis Mack Sr. and Helen Mack (Szaldzinski) and was one of eight children. Following high school, Cass served his country in the Navy during World War II and was assigned to the USS Stormes. After his active service he remained in the Navy reserves until 1954. In 1951 Cass obtained his bachelor’s degree in accounting from Wayne University in Detroit, Michigan. He also married the love of his life, Mary Louise Porta, on October 13, 1951, and they were blessed with ten children. Cass worked as an accountant for Aerojet General in California for several years and in 1964 returned home to Michigan and was the general manager of Whitehall Metal Studios in Montague, Michigan. Cass cherished his large family and his service to his country. He was also an avid sports fan, loyal to many Michigan sports teams. Cass is survived by his children, Mary (Mark (deceased)) Stowasser, Susan (Sid) Young, Michael, Kevin (Mindy), Sharon (Dean) Eaton, Teresa (Dan) Wackernagel, Brian (Katie), James (Tracy) , Margaret (Todd) Perrin, Cynthia (Patrick) DeStefanis, 29 grandchildren and 22 great grandchildren. He is also survived by his brothers, Artie, Bobby, and David Mack. He was preceded in death by Mary, his loving wife of 56 years, his parents, and siblings. Visitation will be at St Anthony Church in Menomonee Falls, Wisconsin on Monday, October 24, 2022, from 9:00-10:30 am with a Catholic mass and military burial to follow. Memorials or donations may be made to Angels Grace Hospice in Oconomowoc, Wisconsin which provided loving and tender care to Cass in his final days

Disgraced ex-FBI agent tells MSNBC ‘9/11 is nothing compared to Jan. 6’