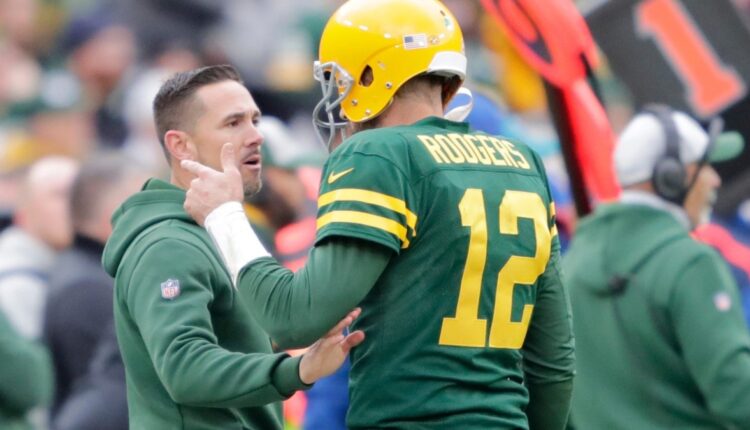 GREEN BAY, Wis. – On Sunday, in the immediate aftermath of the debacle against the New York Jets, Green Bay Packers quarterback Aaron Rodgers made clear his thoughts on how to fix a broken offense.

On Monday, having had the night to sleep on the 27-10 loss and the morning with a mop in hand to clean up the mess, coach Matt LaFleur was asked about simplifying.

“I don’t know what that means,” LaFleur said. He went on to talk about execution, blocking, technique, communication, putting players in better positions and getting everybody on the same page.

Later, LaFleur was asked if that was a tongue-in-cheek comment about not understanding Rodgers’ request.

So, what’s the middle ground between the approach the team’s two offensive leaders – LaFleur and Rodgers – would like to take?

“First of all, you’re going to have to ask Aaron what he meant by that,” LaFleur said of simplifying. “Second of all, I think that every week when we go through a plan, we are 100 percent going into the game on the same page. There’s nothing that we put in when we put in a game plan without having some communication with him. I don’t want to put it in if he doesn’t feel good about it or uneasy about it. Obviously, you always want your quarterback to be comfortable and confident with the plan. That’s where it starts. We talk about everything we’re going to put in.”

After the game, Rodgers did outline what he meant. He pointed to the “couple drives” in which the Packers moved the football were with “very simple plays and no motion.”

Motion is a big part of the LaFleur-Shanahan-McVay style of offense that’s taken the league by storm over the last handful of years. Last season, the Packers ranked sixth with a motion rate of 59.4 percent, according to SportRadar. This season, the Packers rank 13th with a motion rate of 57.1 percent, their ranking falling mostly because other teams are using more motion.

Rodgers, on the other hand, has never been a big fan of motion, though he had gained a measure of acceptance for the intel it can uncover pre-snap.

So, in what could be one example of the conversations that will take place between coach and quarterback over the coming days to get this formerly high-flying offense back off the ground, what will LaFleur choose to do? Will he stick with his offense – the offense that got him the job in Green Bay in the first place? Will he listen to Rodgers, the man who ultimately is piloting the offensive plane? Or can they find some winning compromise?

“We never want to do anything that’s going to confuse our players,” LaFleur said after pointing out that the offense ran one snap of motion in two opening three-and-out possessions. “Certainly, I don’t want to put our players in a spot where, why motion if there’s going to be more confusion? I’m with that. We don’t want to do that.

“A lot of the time when we do it, it is either to try to gain some sort of advantage, whether it’s getting man-zone tells, whether it’s maybe gaining some leverage so you can have a different angle on a block, maybe it’s allowing a wide receiver a free release. We don’t just do it to do it. Maybe it’s to disguise a play we really like that we ran a bunch. There’s many reasons why you do it, but we’re never going to do it just for the sake of doing it. Bottom line is we’ve got to coach better. We’ve got to go out there and execute better.”

Ultimately, the conversations between LaFleur and Rodgers will revolve around that last sentence. Do the Packers need to simplify their schemes and calls? Or do they simply need to execute those schemes and calls better?

“It really doesn’t matter what we do,” LaFleur said. “If we don’t block better, it’s hard to do anything. And I think that was the no. 1 issue yesterday.”

Report card: Only one positive grade for Packers

Offensive line gets routed by Jets

Do Packers need to make move before trade deadline?

Offense seeks simple solutions to its many problems

Season on the brink?: Game story, game ball and more