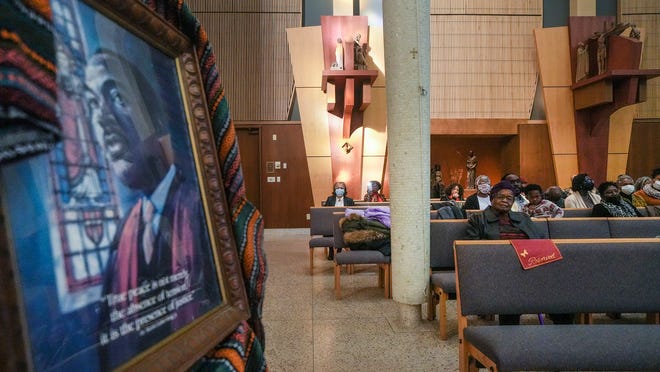 She started by calling it a “tale of two cities.” One of them was plagued by “poverty, gun violence, car theft and despair,” while the other enjoyed “prosperity, peace and hope.”

Ashley went on to describe a wealth of lessons from King’s seminal 1963 “Letter from Birmingham Jail,” that apply to the racially segregated Milwaukee of today.

“If we do not answer his call, I fear we will surely continue to suffer for it,” Ashley said before a crowd of around 200 people at All Saints Catholic Church, 4051 N. 25th St., on Saturday. “Dr. King’s letter from the Birmingham jail is a written reminder of God’s vision of racial equality and a call to action.”

Ashley delivered the keynote speech at the church’s annual prayer service in honor of Martin Luther King, Jr. Day. This year’s ceremony centered around King’s 1963 letter, in which he declared “injustice anywhere is a threat to justice everywhere,” and that people have a moral responsibility to break unjust laws and pursue justice through direct, nonviolent action.

Ashley, who was first appointed to the bench by Gov. Tony Evers in 2020, focused his remarks on applying three themes from King’s letter to Milwaukee: the tension of change, the danger of complacency and the role of community.

Ashley liked some of the reaction to the Black Lives Matter movement in 2020 to the reception King’s demonstrations received in the 1960s. She, like King, said too often some onlookers distract themselves by examining how people respond to oppression, rather than the form of oppression that’s in place.

“That playbook is still in use today,” she said. “It always troubled me that there was not… concern for the communities of color grappling with the trauma of repeatedly seeing Black life extinguished in real time on camera, because that takes a toll.”

Like King, Ashley encouraged others to continue fighting for change, saying the tension it creates will eventually force others to confront the issue.

Those issues can also be confronted at the polls, but Ashley said she has become discouraged about a lack of voter turnout in Milwaukee’s Black community. She said she’s worried too many people have become complacent by believing voting doesn’t matter.

She reminded the audience that the last several major elections in Wisconsin had all been decided by just thousands of votes.

She quoted King’s letter by saying, “We must come to see that human progress never rolls in on wheels of inevitability. It comes through the tireless efforts and persistent work of men willing to be coworkers with God, and without this hard work time itself becomes an ally of the forces of social stagnation.”

But she said the most powerful message of King’s letter was the power of community and the idea that what affects someone directly will impact everyone indirectly.

“Our communities are hurting,” she said. “Violence is everywhere.”

Ashley reflected on her bringing up in Sherman Park, where neighbors knew each other, spent time with each other and police officers would hand out baseball cards to kids.

She said she does not have that same connection in her current neighborhood. They don’t congregate or socialize.

“We have to wonder – what changed?” she asked.

There are still examples of robust communities in Milwaukee. She singled out community groups like Amani United, who keep residents connected, informed and served. But she feared those were becoming more of the exception and less of the norm.

She encouraged everyone to change that by introducing themselves to their neighbors, forming a block watch group or making any excuse to spend time together.

“America is stronger when everyone can enjoy the promises of the constitution,” she said.