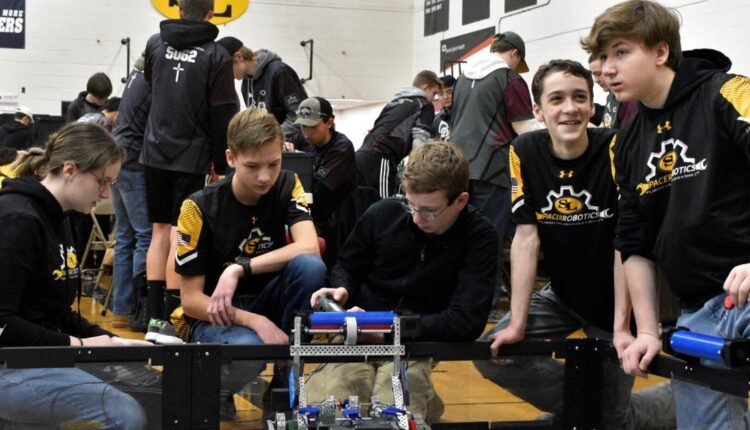 Robotics teams from all across the state put their skills to the test for the 2023 Wisconn Valley Competitors play a VEX Robotics Competition Tournament hosted at Shoreland Lutheran High School on Saturday.

The robotics competition is the largest is southeast Wisconsin, and featured 31 high school teams on Saturday, ranging from local schools, such as Shoreland Lutheran High School, to schools in other areas such as Fon Du Lac.

In the tournament, teams face off for a VRC game called “Spine Up” on a 12 foot by 12 foot square field.

Each team, which has anywhere between three and eight members, pairs with another team to put in two robots. The team is indicated by a red or blue color. The matches consist of a 15-second autonomous period, followed by a one minute and 45 second driver-controlled period.

The object of the game is to score the greatest number of points.

Teams in the competition scored points by shooting plastic discs into a basket, similar to that of a disc golf basket, changing the color on a roller to their team color and shooting string out from their robot to as many squares in the ring as possible.

Tyler Paulich, a junior at Union Grove High School, came to the competition as a first-time competitor, adding he was representing a large portion of his team who could not make it.

“The robot moves 360 degrees and the (disc) shooter works great,” he said. “It’s fun to drive around. I’m going to try and win one.”

The Shoreland Robotics program has seven different teams, with 41 students spread throughout those teams.

“We all contributed ideas, then ranked them against the criteria,” Grow said. “We made sure all aspects gelled together.”

Once the team got the design down, they got to work starting in August.

“I’m really excited for today,” Grow said. “We are all friends outside of the Robotics Club.”

Shoreland will send its top three teams to compete at the Northeast Wisconsin VRC Showdown in February at Lambeau Field against teams from around the country. The 2023 state championship will be held at the Resch Expo in Ashwaubenon for all qualifying teams. From there, teams that qualify could attend the Create US Open Championships in Iowa in March, and the World Championships in Dallas in April.

“Every year, we have one to two teams make it to State,” said Daniel Nolte, technology director at Shoreland. “One already qualified this year. No one has advanced to World’s yet, though.”

Additional area student teams are set to compete during the grade school competition on Sunday from 12:30 pm to 5:30 pm at Shoreland Lutheran High School. Admission is free and open to the public.