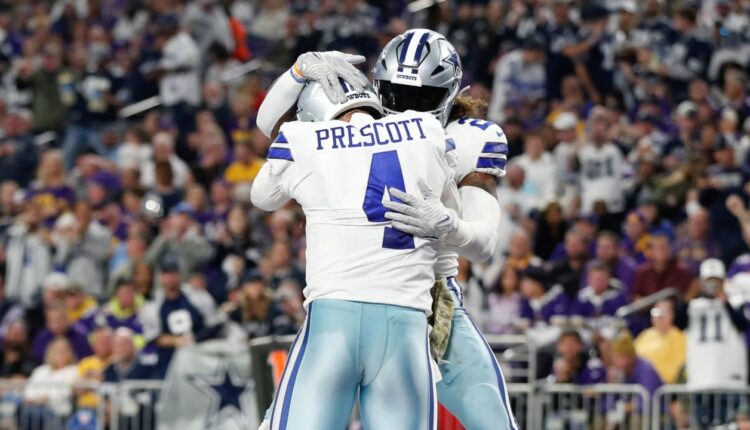 A week after blowing a fourth-quarter lead in Green Bay, the Cowboys went to Minnesota and throttled the 8-1 Vikings, 40-3, in a game so lopsided that viewers wondered why any starters were playing midway through the third quarter.

When CBS decides to change games midway through a Dallas Cowboys contest, you know it’s a laugher.

Last week, owner Jerry Jones lamented being “frustrated” after the loss in Green Bay. On Sunday, he was back to thinking about contending for a Super Bowl.

“A resounding yes. Yes. Unequivocally yes,” Jones said when asked if his club is championship-caliber. “I think we’ve had adversity. We very easily could have some more adversity … Yes, I think if we use the experience of what we’re having in the season, then we’re going to be playoff-ready. But I sure do think that what I see out here right now is the team like that you could go get a Super Bowl with.”

Every phase shined for Dallas.

The Cowboys generated a season-high seven sacks, DPOY frontrunner Micah Parsons leading the way with two. The offense stacked points as Tony Pollard displayed versatility, generating 189 scrimmage yards, including 109 receiving yards and two touchdown catches. And Brett Maher nailed all four of his kicks, including two of 50-plus yards and a 60-yarder to end the first half.

“I thought too much this game was going to tell us what we are,” Jones said. “I don’t know that we’re that. I really don’t. But I know this, that we’re not a team that doesn’t respond when it’s wounded. Everybody thought against the Packers that we underplayed, and I think you saw what happened when we got out here tonight and the team all came together. We’ll build from this.”

The players felt the same way about trashing the NFC North leaders.

“This week was a statement week,” Parsons said. “It says what we’re capable of when we put our mind to it.”

The 7-3 Cowboys can make an even bigger statement with a win over their division rival, 7-3 Giants, on Thursday in front of a Thanksgiving audience.