D-Backs’ Madison Bumgarner searching for way out of rough stretch 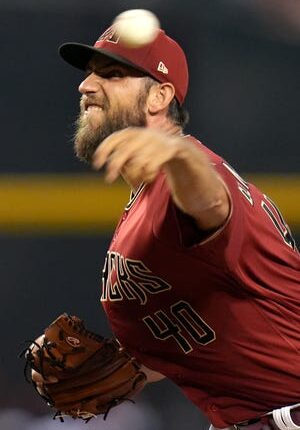 CHICAGO — Diamondbacks left-hander Madison Bumgarner said he has tried “five thousand different things” in his effort to get his season back on track, but he did not sound all that encouraged by the way things are going.

“I wish I could tell you I did,” he said, when asked if he felt any closer to finding answers, “but I don’t.”

Bumgarner’s turn in the rotation was supposed to come up against the White Sox on Saturday, but the Diamondbacks opted to push him back to Monday against the Philadelphia Phillies, giving him more time to work with pitching coach Brent Strom on potential adjustments.

On that front, Bumgarner said they have been “throwing a bunch of (expletive) against the wall trying to see what sticks.” Strom intimated that they were toying with the idea of ​​significant changes to Bumgarner’s delivery but wound up landing on more stylistic adjustments.

“There were ingrained movements that he has that that we were trying to kind of just tweak a little bit,” Strom said. “But I think that the idea that I reverted back to what tempo and rhythm. I think that’s the way to go with this thing as opposed to where you are in space, so to speak. He seemed to be good with that.”

Strom said they wanted more “tempo and rhythm and timing” between Bumgarner’s upper and lower halves. He also said they have been soliciting input from the club’s analytics staff to understand how best to utilize Bumgarner’s stuff.

Bumgarner did not sound as certain, but he also did not seem to think that, aside from the results, he has been pitching all that different lately. Over his past five starts, Bumgarner has a 7.53 ERA with 10 walks and 19 strikeouts in 28 2/3 innings. He has allowed at least four earned runs in each outing. In the 10 starts prior to this stretch, Bumgarner had a 4.02 ERA.

“It hasn’t been very good (over) the last five starts or whatever it is,” Bumgarner said. “I honestly don’t think that how I’ve pitched those five starts is different from the five or 10 or whatever before.”

Bumgarner acknowledged the difficulty of implementing changes in-season. He said he would wait to see how the rest of the season played out before determining whether he would look to make wholesale changes in the offseason.

He seemed unsure about whether such changes were necessary. Though he did not deny how bad his results have been, he said he thought the quality of his stuff was “fine,” adding that he had “pitched better with worse stuff.”

He noted that his cutter had been an effective pitch for him early in the season but had fallen off lately. He said he was not certain why.

“To me, what I see, we haven’t had a lot of trouble getting to two strikes,” he said. “But there’s been a lot of foul balls once I got there and harder contact than I want once I got there. Finding ways to put guys away once we got there is where I’m at.”

Diamondbacks center fielder Alek Thomas met with a phalanx of reporters prior Friday’s game, his first as a professional at Guaranteed Rate Park, where he spent much of his childhood as the son of a former White Sox coach.

Thomas, whom the Diamondbacks selected with the 63rd overall pick in the 2018 draft, said he was not surprised when the White Sox did not select him. He said the club told his dad, Allen, who at the time was the team’s strength coach, that they wouldn’t.

“I think it was that they were done drafting family members,” Thomas said. “I think they took a step back from that.”

The White Sox drafted a number of players who were relatives of staff members, including the sons of executive Ken Williams and former manager Ozzie Guillen.

“Being a White Sox fan, I was like, ‘Yeah, they shouldn’t take me. They should take a college pitcher,’” Thomas continued. “I think them drafting an outfielder kind of rubbed me the wrong way a little bit.”

That year, the White Sox used their first pick at No. 4 overall on college infielder Nick Madrigal. They then took college outfielder Steele Walker with the 46th overall pick.

Right-hander Chris Devenski was designated for assignment, clearing a spot for recently claimed right-hander Reyes Moronta. Devenski had allowed nine runs in 10 2/3 innings in 10 appearances since coming up from Triple-A Reno in July.