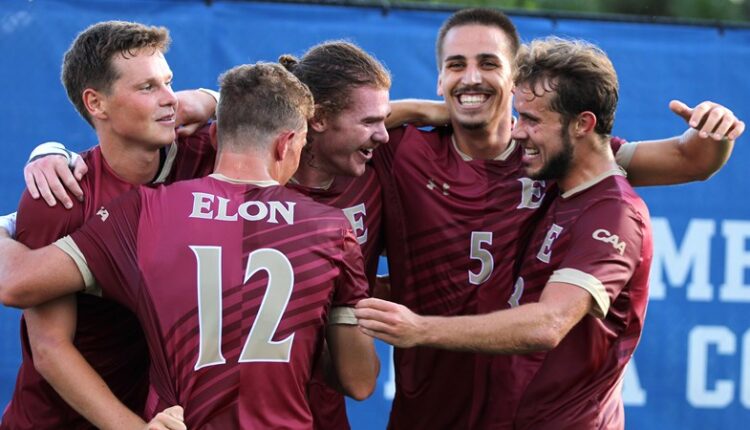 DURHAM, NC- Behind a pair of header goals from sophomore Scott Vatne and graduate student Michael Clow, the Elon University men’s soccer team opened its 2022 campaign with a 2-0 victory over Milwaukee in the Phoenix’s first match at the John Rennie Nike Classic on Friday, Aug. 26, at Koskinen Stadium.

“I think it’s a great start,” said Elon head coach Marc Reeves. “It was a great win because they are a good side and we played pretty well. We were able to score a pair of fantastic goals and then hang in there at the end, which is what you need to do to get results on a neutral site and on opening day with the heat.”

The Phoenix got on the board first in the opening frame thanks to Vatne’s goal in the 20th minute. The sophomore from Klepp, Norway, headed in a cross from Kasper Lehm near the back post to put the maroon and gold ahead 1-0.

Both teams only had one more shot for the remainder of the opening stanza after that point, which came from Milwaukee’s Kasper Davidsson in the 32nd minute. The midfielder was turned away by keeper Ryan Bilichuk for his first save of the match as Elon went into the break ahead 1-0.

Just over 11 minutes into the second half, Elon doubled his lead with Clow’s header goal. The Phoenix earned a corner kick that was deflected back into play by the Panthers’ defense. Elon’s Jeppe Jordoson recovered and sent a pass to Vemund Hole Vik who in turn sent a cross into the box from the right side. The pass found the head of Clow near the top of the six-yard area as the Leola, Pa., native put the Phoenix ahead 2-0.

Milwaukee became the team on the attack as the Panthers had five shots over the next 15 minutes compared to one for the Phoenix. The lone one on frame however came in the 64th minute by Milwaukee’s Joshua Kidder, who fired a shot to Bilichuk, but the netminder was able to knock the ball away for his second save of the match.

Elon almost went up 3-0 in the 77th minute as the Phoenix’s Victor Stromsten found himself one-on-one with the keeper on a breakaway. The Panther’s keeper Nick Chiappa was able to force Stromsten into a difficult look before corralling the ball for the save.

Neither team had a shot on goal the remainder of the match as the Phoenix held on for the 2-0 victory.

• Milwaukee won the overall shot battle, 11-7, over the Phoenix with both teams having three shots on target.
• Bilichuk made three saves between the posts in his debut for the Phoenix.
• This was the first matchup on the soccer pitch for both teams.
• Elon has opened at the John Rennie Nike Classic at Duke University for eight of the past nine seasons. Over that time, Elon has a 10-3-3 record versus his opponents.
• Four players made their debut in the starting lineup for the Phoenix – Bilichuk, Clow, Franc Gamiz Quer and Majaliwa Msabaha. Three of those players, Bilichuk, Clow and Gamiz Quer – are graduate students.

Elon is back on the pitch this Sunday, Aug. 28, for its finale at the tournament versus San Diego. That game is slated for a 12 p.m. kickoff.

D-Backs’ Madison Bumgarner searching for way out of rough stretch