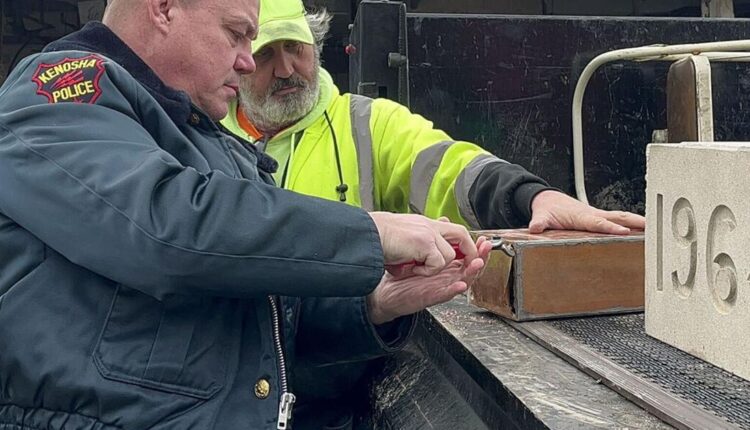 Work on the future of Downtown Kenosha uncovered a surprising piece of its past this week.

While working on the demolition of the old Civic Center, site at 812 56th St., members of the Macemon & Sons Inc. of Racine demolition team found something odd in one of the walls.

Upon further inspection, Daniel Macemon found a copper-colored metal box tucked inside a cinder block. The block was cut with the year “1964” inscribed on the outside.

“I was excited when we found it,” Macemon said. “We didn’t know what it was until we got it out of the wall.”

He told the Kenosha News Thursday about the discovery after pulling the block out of the construction site. Since the old Civic Center was a former police station, he also contacted the Kenosha Police Department and they got together to open what they assumed correctly to be a time capsule on Friday morning.

“I have to get the right kind of tools,” he told the News, indicting the sealed capsule was metal and had to be carefully cut open.

Inside the copper-colored box — which had to be accessed by pulling off the cement cover plate at the top of the concrete cornerstone-type block — they found much of it was in the form of paper documents. There was a 1966 open house booklet for the new police station, a green City of Kenosha Board of Public Works specifications book, a handful of business cards, copies of the Kenosha News and associated cutouts from the paper, along with photos of the then- new Civic Center building.

“The fact that it was recovered in decent condition is remarkable,” said Kenosha Police Sgt. Jeff Galley. The papers had not gotten wet over the years, of even deteriorated much, attesting both to the efforts to seal the metal capsule box inside the concrete block, and the stability of the building over the decades.

The Macemon crew handed off the time capsule to police to store in another location.

“We are very appreciative of Macemon & Sons for calling us so we can preserve department history,” said Kenosha Police Capt. James Beller. “Any history we collect and save is important to us.”

The current City Hall, which is located in the Municipal Building at 625 52nd St., will be transformed into a park in next phases of the development.

“I’m glad the capsule was a great find,” Macemon said. “And I’m glad it’s going to the city.”