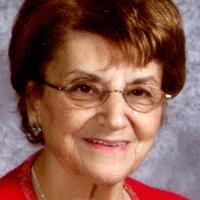 Born in Kenosha, WI, on September 17, 1926, she was the daughter of the late Luigi and Modesta (Lento) Aceto. She attended Bain Elementary School, Washington Junior High School and graduated from Mary D. Bradford High School in 1944.

Felicia was employed by Great Lakes Naval Base in Great Lakes, IL, as a Supervisor in the Electronics Supply Office and later as Secretary to the Commander until her retirement in 1969 after 25 years of service. She later worked for Kenosha Unified School District as a food server from 1990-2008.

Felicia was a member of St. Therese Catholic Church, Kenosha, WI. She enjoyed meeting her friends for “Coffee Club”, and spending time with her family.

In addition to her parents and husband, Felicia was preceded in death by her son, Michael Arnold on August 4, 2018; and siblings, Rosemary Stankey and Sam F. Aceto.

Visitation will be held from 10:00 am–11:00 am on Wednesday, January 11, 2023, at St. Therese of Lisieux Catholic Church, 2020 91st Street, Kenosha, WI with Mass of Christian Burial to commence at 11:00 am Entombment will follow in All Saints Mausoleum, Pleasant Prairie, WI. In lieu of flowers, those desiring may make contributions to the Kenosha Achievement Center, 1218 79th Street, Kenosha, WI 53143, in her memory.

Lions will wear the all-white uniforms in Green Bay