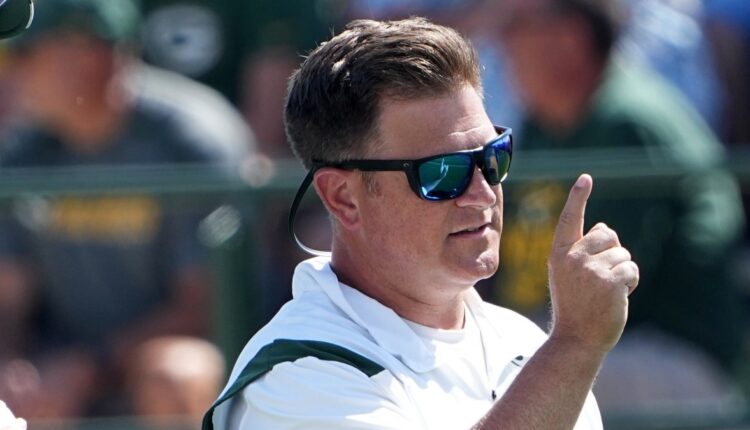 “Between the 53 and the 69 and then the 48 guys that dress on gameday, I think you’ve got to look at it a lot of different ways,” Gutekunst said recently. “And, obviously, the 48 guys that walk out there on the field every Sunday, that’s the most important. But, as you know, it’s a long season with injuries and trying to manage that. This year, with the 16 practice squad players, the ability for those guys to come up three times, there’s much more flexibility than there’s been in the past.”

There are some moving parts. First and foremost, on the offensive line, will left tackle David Bakhtiari and right tackle Elgton Jenkins be cleared for Week 1? And if one or both is out, who will start on the offensive line? And the waiver wire is the elephant in the room.

“I would say you can never exhale in this league, as a starter or not. Otherwise, you’re not going to be at your best,” coach Matt LaFleur said on Saturday. “So, I think the mindset is always, we’re trying to find the best 11 to put out there. And I think you could argue at some positions more so than others, there still are jobs on the line. Plus, you never know who’s going to be available from another team. I know our personnel people are going to work really, really hard. If they see an opportunity to upgrade our roster, I would think that they would jump at that.”

With that as a backdrop, here is our final 53-man roster projection. 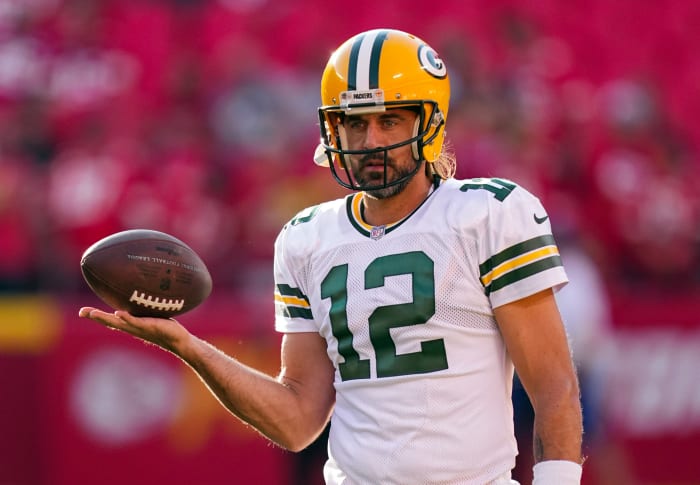 On our 53: Aaron Rodgers, Jordan Love.

The logic: Aaron Rodgers is the four-time MVP and Jordan Love looks like a much better quarterback than the one who lost his start at Kansas City and his relief appearance at Detroit last season. “I think we have a lot of confidence, if need be, if he had to go in there, absolutely could win a game,” LaFleur said.

Waiver danger: Danny Etling had a strong preseason in mopup duty. The rest of the league was well aware of his athleticism following his 86-yard touchdown run with the Patriots in 2018, so it’s not as if his 51-yard touchdown run vs. the Saints will merit any extra attention. 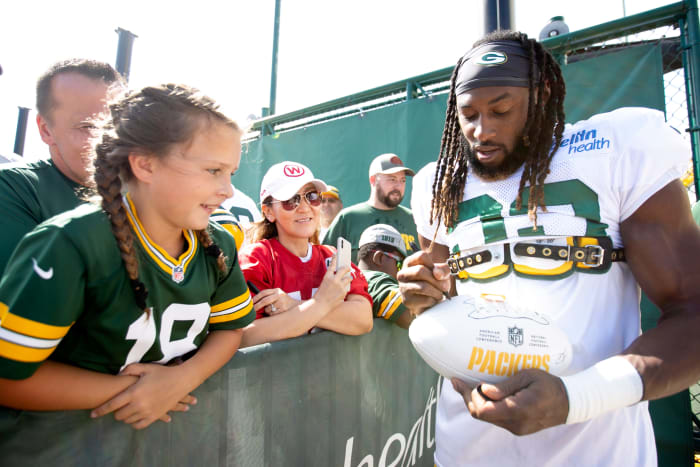 The logic: Watching Kylin Hill cutting his way through cones, it would appear he’ll be ready once his four-week PUP stint is over. Whoever winds up on the practice squad can be elevated to the gameday roster three times. Plus, Amari Rodgers can carry a bit of the burden in a gadget role.

Waiver danger: Patrick Taylor is a tough, no-nonsense running back who was productive in last year’s finale at Detroit. Is he so good in pass protection that he’s going to be grabbed upon final cuts? Probably not. As for Tyler Goodson, the other 31 teams could have drafted him, and he didn’t put anything on tape in three preseason games that he didn’t put on tape at Iowa. Goodson is a fast, sure-handed running back. Everyone knew that in April. 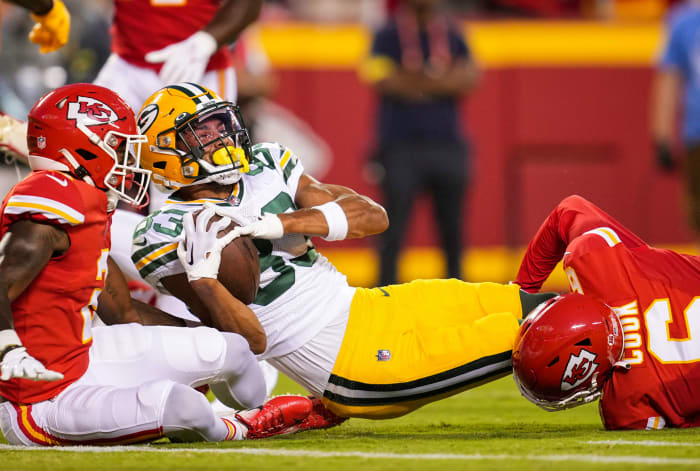 The logic: In 2019, Aaron Rodgers was ticked that the Packers got rid of Jake Kumerow. GM Brian Gutekunst wouldn’t release Winfree, who Rodgers has raved up a couple times. Right?

A seventh receiver won’t be on the field to catch passes. He’ll be on the roster to do some of the dirty work along with potentially catching some passes. Winfree has shown himself a capable blocker.

Waiver danger: It’s true that you never get a second chance to make a first impression. It’s also true that the last impression is the lasting impression. Samori Toure was superb in the final game against the Chiefs. But he was the last of 28 receivers drafted in April, and receivers who are 6-foot-1 with 4.48 speed and 34.5-inch verticals aren’t exactly unicorns. 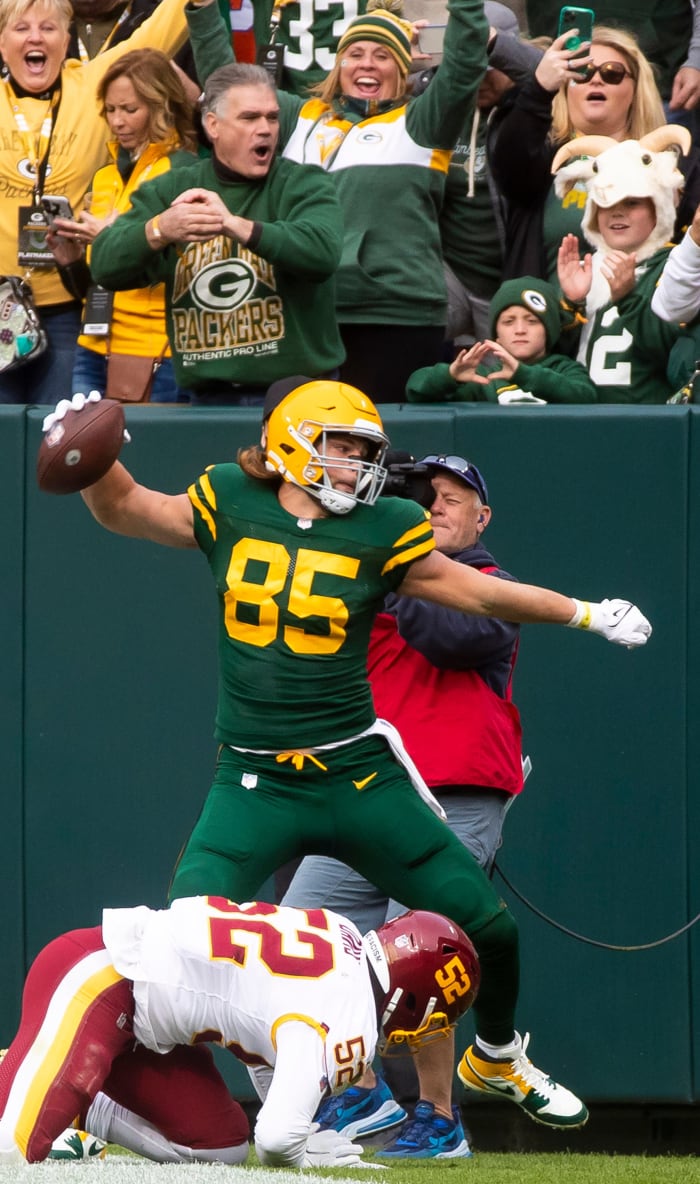 The logic: The return of Tonyan from his torn ACL is huge. This is a high-quality group, with Tonyan the playmaking receiver, Lewis the rugged blocker, and Deguara the quasi-fullback. Davis didn’t have a great preseason but the Packers like his upside too much. 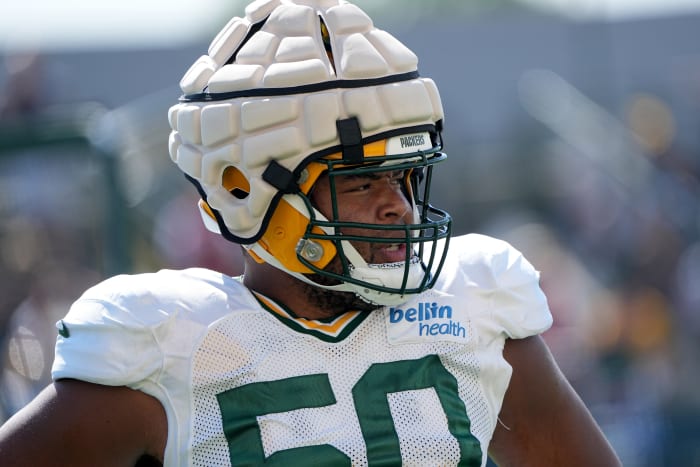 The logic: I had 10 linemen on the previous projection but the play of Jack Heflin warranted a sixth defensive lineman. So, someone had to go somewhere. The gamble is having only eight healthy linemen if David Bakhtiari isn’t quite ready for Week 1, though Zach Tom’s five-position versatility could diminish the risk.

“We have no idea,” if Jenkins or Bakhtiari will be cleared for Week 1, LaFleur said. “It’s hard to project that without being through practice, see how they respond and getting into team reps. So, like I’ve said all along, we’re going to take it day-to-day.”

Waiver danger: Rasheed Walker was a seventh-round draft pick, even though he started 32 games at left tackle at Penn State. Athletic offensive tackles don’t grow on trees. Walker didn’t have a good training camp – part of that was due to a foot injury that hindered his development – but he was really good in his preseason debut against the Chiefs. Caleb Jones went undrafted, even though he started the final 30 games of his career at Indiana. Weight issues were a reason but he’s got those in check and had a really good summer. PFF charged him one pressure in 45 pass-protecting snaps. 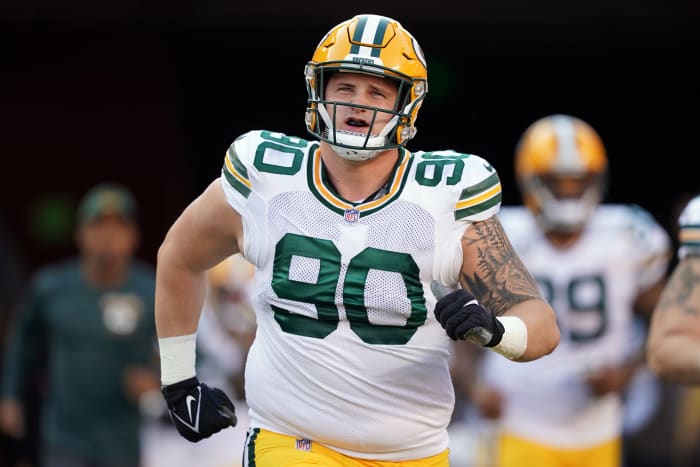 The logic: This group is loaded, especially with Clark, Reed and Lowry being proven three-down players and Slaton showing signs of that, as well. What a luxury to have that four-man rotation. The Packers probably don’t need to keep six but Jack Heflin earned a spot with a fabulous preseason. Moreover, with first-round pick Devonte Wyatt’s struggles, the Packers probably are better off with Heflin as No. 5.

Waiver danger: The Packers are in a rare position with having so much depth on the defensive line. A lot of teams don’t have that luxury. That would be the gamble in releasing Heflin and trying to sneak him onto the practice squad. Seventh-round pick Jonathan Ford showed some promise, too, and Chris Slayton certainly didn’t play like a 2019 draft pick who has never been good enough to play in a regular-season game. It will be interesting to see if the Packers can find a way to keep Heflin, Ford and Slayton among their 69. 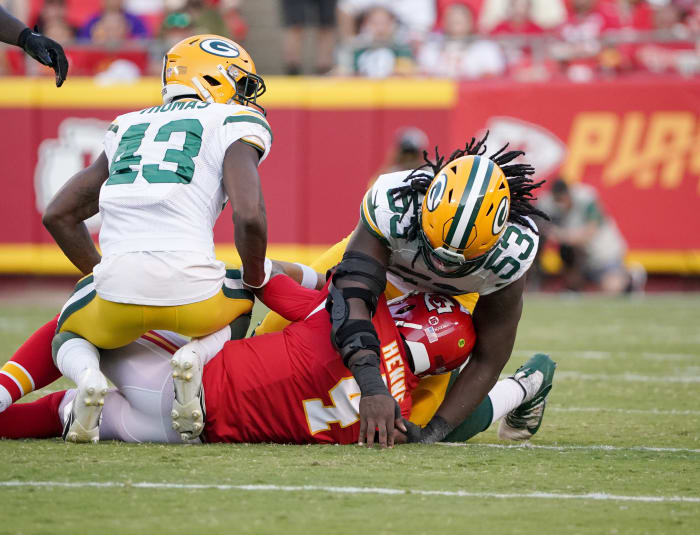 The logic: This is the most wide-open competition on the roster. “

“There were some good moments,” LaFleur said on Saturday. “Do we have confidence in that room? Absolutely. We still know there’s some young guys in that room that need to continue to develop and get more reps, which is always the challenge when you start transitioning into the season [and] the number of practice reps you get in a practice are very limited.”

Green Bay’s young prospects, so strong during the joint practices against the Saints, didn’t provide much of an impact in the preseason games against the Saints and Chiefs. Jonathan Garvin has been the No. 3 for most of the summer, Tipa Galeai has been a No. 1 on all the special teams units and Kingsley Enagbare has the draft pedigree (fifth round) and most production (nine pressures, five more than anyone else, according to Pro Football Focus.

Waiver danger: Probably none. In the group of Tipa Galeai, Kingsley Enagbare, Kobe Jones and La’Darius Hamilton, only Enagbare was drafted and nobody put together a highlight package in the three preseason games. 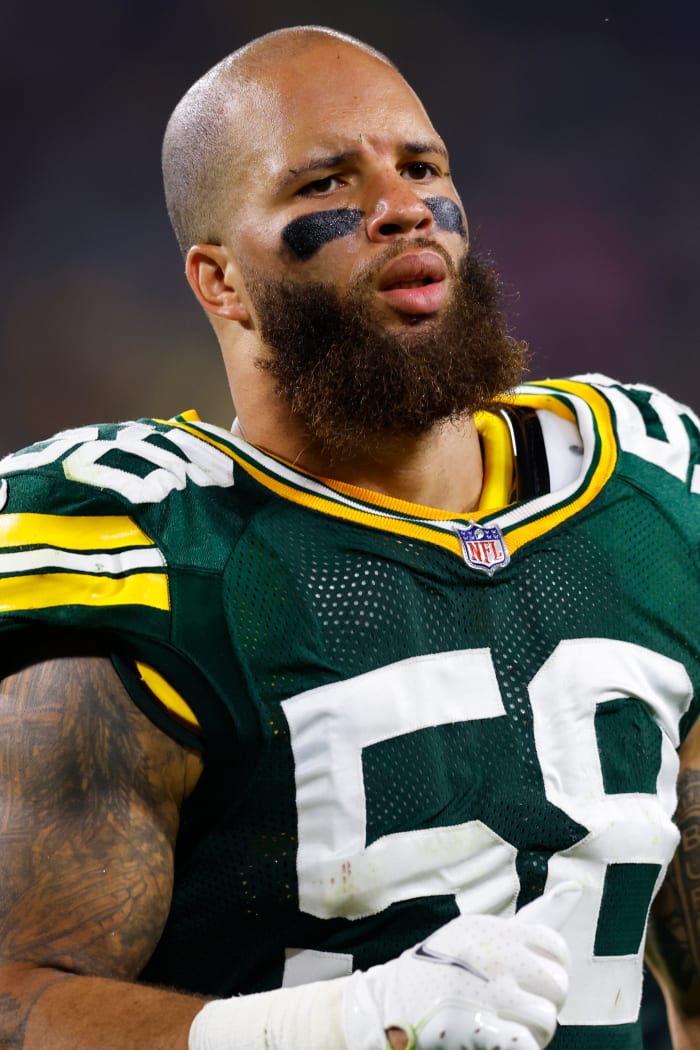 The logic: This group is really good. Coming off an All-Pro season, De’Vondre Campbell had a tremendous training camp. Quay Walker, the team’s first draft pick, had a good camp, too, and really had a strong game against the Chiefs. There might not be a more improved player on the roster than McDuffie. And Barnes had two solid seasons as a starter. 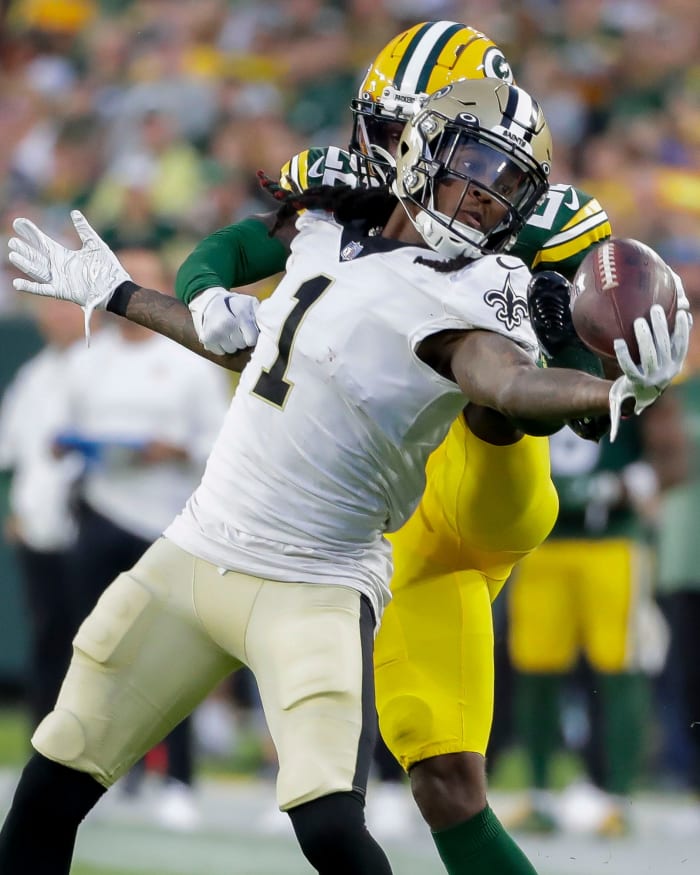 The logic: The first five are set. The Packers entered camp with major questions about their depth behind their elite starters. Count Shemar Jean-Charles, a fifth-round pick last year who barely played as a rookie, among those who have taken Year 2 jumps. Nixon didn’t play much on defense in three seasons with the Raiders but looks like he can play, too. If the Packers keep six, and that’s no guarantee, it would be between Kiondre Thomas and Rico Gafford. Thomas covered well and isn’t shy about throwing his body around in run support. He could help the special teams.

Waiver danger: Kiondre Thomas played a bit last year for the Chargers. With some experience and pretty good film from the preseason, he might interest some corner-starved team. 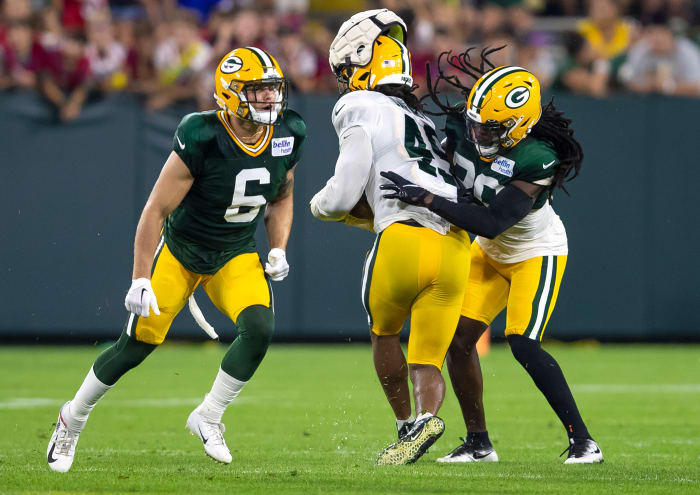 The logic: Let’s start with the technicalities. Dallin Leavitt will make the 53 and, if he’s not quite ready following the shoulder injury suffered at San Francisco, will be sent to reserve injured the next day. Amos and Savage are a top-notch starting tandem, but the depth suffered a blow with Vernon Scott’s shoulder injury. The depth is better than it looks, though, with Rasul Douglas getting some safety snaps at practice last week. Seventh-round rookie Tariq Carpenter has shown he can be a really good open-field tackler.

Waiver danger: Micah Abernathy was signed to help the Packers get through a bunch of injuries. Turns out, the USFL graduate can play, too. He had one interception against the Saints and might have had another against the Chiefs if not for being blatantly grabbed by a receiver on a goal-line screen. With USFL film and two preseason games, he might be claimed if released. Perhaps the Packers will keep Abernathy instead of cornerback Kiondre Thomas. 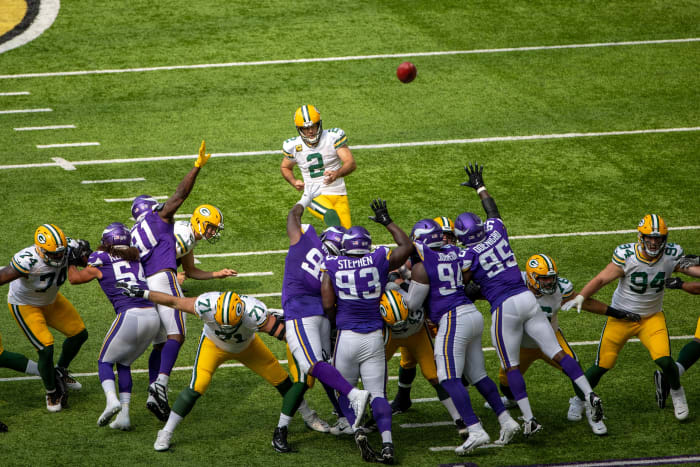 The logic: Ramiz Ahmed’s been really good but, of course, the Packers are going with the veteran Mason Crosby. O’Donnell is the only punter and Coco is the only long snapper. Only two teams have two snappers in camp, so it’s not as if there’s going to be a bunch of proven snappers hitting the market to knock off Coco.

Waiver danger: Ahmed made a 61-yard field goal in the USFL and has been tremendous in camp and in two preseason games. The Packers would love to get him on the practice squad but worked out a bunch of kickers earlier in the week just in case.