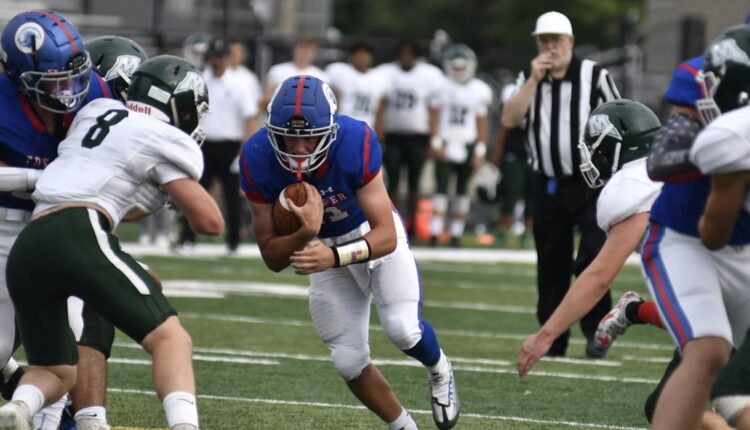 The Shoreland Lutheran football team (0-2) is not that bad.

The Pacers fell again in nonconference action Friday night at the Topper Bowl in Burlington at Catholic Central High School, 24-10, but the score was much closer than the score indicated.

Under new head coach Jason Hagedorn, the Pacers are still trying to figure out the new system, but Joseph Kayon showed flashes of his talent with a couple of long runs.

Honestly, the Pacers were only down 10-3 late in the third quarter and seemed to be driving, but a holding penalty thwarted an otherwise promising drive.

“It was really nice to be able to keep Catholic Central and St. Joe’s on our schedule,” Hagedorn said recently. “Coach Aldrich (CC) knows football, and it’s always fun to coach against someone like that.”

“It’s week to week since I’m the new coach. We want to see what’s going to work each week against each opponent. Overall, I’m very happy with where we’re at with the kids and knowing what they should do. The next step is not just knowing it but making it successful.”

Despite the 0-2 start, the Pacers can feel good about battling both St. Joe’s and Catholic Central before eventually losing by double digits.

Shoreland’s slow, but steady improvement is just one thing I observed from my travels covering Shoreland and Central Friday night.

These games were just the tip of the iceberg, as Indian Trail scored 50 points in an overtime thriller, Tremper shocked Union Grove and Bradford got its first victory of the season.

Here are my three biggest takeaways from Week 2 of the football season Friday night:

I say “must” because it is still early with only two nonconference games, but I really like what Colin Zalakar and his staff are doing with the Trojans.

They went into a hostile environment against a conference champion Union Grove squad Friday night and molly-wopped them.

Sure, it was 12-7 Broncos early, but then the Tremper train came through and couldn’t be stopped.

Thirty-six unanswered points later, and the Grove is 0-2 and Tremper sits at 1-1 after winning only three games last year.

Tremper outgained the Grove, 398-158, behind 222 passing yards and three touchdowns and another 83 yards rushing from quarterback Mason Prozanski.

Game-breaking playmaker Deszmund White caught four balls for two of those scores and added 57 rushing yards and a score on the ground.

Along with Friday night’s big-time win, we learned the season-opening 34-13 loss to Madison Memorial was no fluke.

Tremper players are feeling more comfortable in Zalokar’s system, which wasn’t fully implemented when he started in 2020 because of the COVID-19 pandemic.

With numbers up, hopes are high at Ameche Stadium.

All signs point to the Trojans winning more than three games this season.

No matter the size of a school, the game of football and most sports for that matter come down to the Jimmy’s and the Joe’s.

Who’s actually on your team?

Do you have the talent to compete at a high level?

D1 is D1, no matter the talent or strength of the Tosa East program, and Schuler, who will play Division 2 college football next season, showed just how much he impacts a football game.

Schuler picked off a pass in the second quarter and took it 95 yards to the house to put the Lancers up 14-0.

Then, in the third quarter, he caught a 9-yard TD pass from Eric Kenesie.

The icing on the cake was a 53-yard interception return from Kenesie.

Tosa East may not be great, but any victory for a D4 team over a D1 team is impressive.

With 264 total yards and only 64 allowed, and another 140 yards rushing from Jayden Gordon on only 16 carries, St. Joe’s has now rolled in consecutive weeks and is showing why it figures to be a state championship contender this fall.

3. Wilmot defense has allowed only 7 points this season

Anthony Corona is going to play Division 1 college football next fall at Illinois State University as a ball-hawking, hard-hitting safety.

For now, as a senior with the Panthers, he can do it all.

While Schuler’s 95-yard interception return for the score was the biggest defensive play of the night, Corona may have had the biggest offensive play.

Corona capped off a 33-0 shutout victory at Milwaukee Lutheran with an 88-yard rushing touchdown, showing off his elite speed.

Wilmot improved to 2-0 this season and has outscored opponents 57-7.

The Panthers got another elite rushing performance as a team, with 128 yards and two touchdowns from Marco Falletti, who is second in the area in rushing this season behind St. Joe’s junior Jayden Gordon.

Anthony Hall added 58 rushing yards and a score, and the bulldozing back also caught a 30-yard touchdown pass from Cooper Zimmermann.

I’ve only seen Shoreland, St. Joe’s, Wilmot, Bradford and Central so far this season, but I would honestly put the Panthers up against any one of these teams and really anyone in the Southern Lakes.

After a rare 1-win season, head coach Keiya Square has turned things around tremendously and has his Panthers in prime position—with enough talent and determination—to capture a conference title.

Mike Ramczyk is a sports reporter for the Kenosha News.