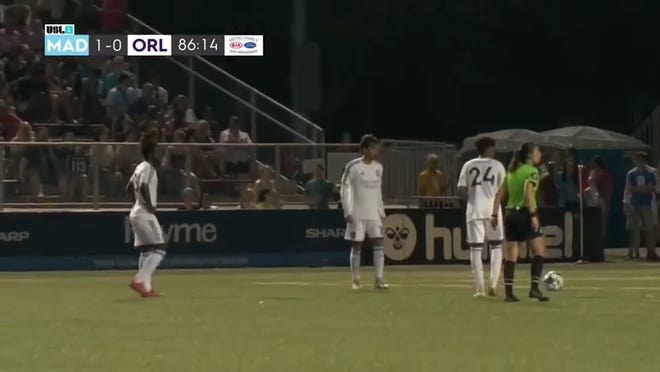 Dayne St. Clair was a young goalkeeper in need of experience when he got to Forward Madison FC in 2019. Although his time with the team didn’t last long, it was impactful and helped him secure a roster spot on Canada’s World Cup roster this year.

In 2019, Forward Madison had a unique partnership with MLS team Minnesota United FC, where the club would send its players to Madison to work on their games.

More:High-level pro soccer is coming to downtown Milwaukee’s new Iron District, but fans will have to be patient

“He made a couple incredible saves to keep the match level or win it for Forward,” Warwick remembered. “You could tell he was going to be great just because of his stature in goal. He’s just a massive individual and even when he was that young, he just took up so much of the goal and there was a certain presence about him. You could just tell he had something different.”

It was Forward Madison’s inaugural season in the USL League One.

“At the time, we were in desperate need of a goalkeeper and Dayne was very young, coming to Madison in one of our first seasons and he made an impact right away,” Warwick said. “You could tell, even in those brief game stints, that he was something special. And obviously we wish we had him for longer.”

On Sunday the Canadian men’s national soccer team announced St. Clair made its World Cup roster. It’ll be the first World Cup for the 25-year-old goalkeeper from Pickering, Ontario.

Canada faces Belgium on Wednesday at 1 pm in its first game of the 2022 World Cup.

While all the credit is given to St Clair for making the roster, Warwick feels like Madison and the USL League One helped develop his talent to get him there.

“Dayne is the perfect example of that in the sense that he worked his way up and really built up his skill set in the lower leagues,” Warwick said. “He’s now on a World Cup roster and has the potential to start. You can come to a Forward Madison game and see a potential World Cup player at any point.”

St. Clair has played for Minnesota United for the last three years and had one of his best seasons this past year with 32 regular season starts in the MLS and 109 saves. St. Clair also started in Minnesota’s only playoff game this year in which it lost to FC Dallas in penalty kicks.

But Warwick believes his time in Madison gave St. Clair confidence to perform when the game is on the line.

“He’s playing in front of 5,000 fans in a very small stadium and so, it’s a very boisterous atmosphere in Madison. I think it prepared him for the big pressure moments at Minnesota United as well as the Canada international team,” Warwick said.

St Clair is the first alumni of the league to make it to a World Cup.

“It says very blatantly that lower league soccer matters,” Warwick said. “It’s teams like Forward Madison or any USL team in particular that they’re great developmental teams. They do a really good job at connecting players with the community, making them feel at home and instilling a certain confidence for them to achieve at the higher levels.”

While the vast majority of soccer fans are going to be cheering on the United States men’s national soccer team, there will be a cluster of football fanatics in Madison cheering for Canada.

“You’re going to see a lot of Forward Madison fans in the Forward Club at Breese Stevens Field watching a lot of Canada games with glued intent because it’s always great to see someone who played in our local community on the international stage,” Warwick said. “We have full confidence that if he’s called upon in the World Cup that he’s going to come up very, very big.”