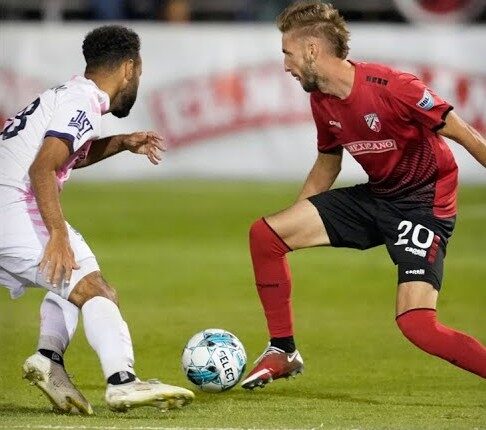 Forward Madison seemed poised to come away with an unlikely win at Central Valley Fuego, but a stoppage-time equalizer from Fuego’s Villyan Bijev ensured that the points would be shared.

It was a back-and-forth affair for much of the match, with neither side creating many good chances in the first 45 minutes. Around the hour mark, Madison’s defense warded off four consecutive corner kicks, with goalkeeper Phil Breno making two saves in one sequence — the first a punch away and the second a leap to swat the rebound over the bar. Breno finished the night with a season-high six saves.

The Mingos would finally strike in the 81st minute when Mikey Maldonado was fouled about 25 yards out from Fuego’s goal. Jeremiah Streng, who had just been brought on for started Abdou Mbacke-Thiam in the 77th minute, lifted the free kick up and over the wall and goalie Ofek Antman, dipping it under the bar for a sensational goal.

Substitute Christian Enriquez was whistled for a foul just outside the box on the left side two minutes into stoppage time, and Sergio Chavez lifted a nicely-weighted cross toward Fuego’s leading scorer, Bijev, who got just inside Eric Leonard to head in the equalizer.

“Ninetieth minute, we’re trying to dribble out of the back,” head coach Matt Glaeser said in an interview after the match. “You need to just toe that into the stands and get organized.”

Madison would have two more chances to get all three points, but Antman was able to gather Enriquez’s sliding shot, and Streng’s effort went wide.

Glaeser said he’s not satisfied with a point on the road.

“Not good enough,” he said. “We shoot ourselves in the foot by making bad decisions. It doesn’t matter how well we play if we keep doing silly things.”

“We can’t be nervous at home. We’ve got to play with personality, we’ve got to play with confidence,” he said. “We’re playing playing alright, just cleaning up some of these mistakes, whether it’s nerves or individual errors. Going back home, we’re confident that we can win games.”