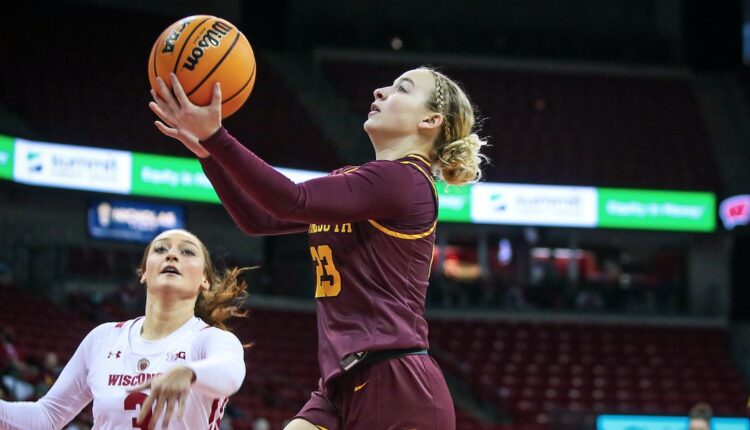 The effort was there, the grit. That’s usually the case with the Gophers women’s basketball team in this up-and-down season.

But again, on the road, it wasn’t enough to make up for the mistakes.

The Gophers lost at Wisconsin 81-77 on Sunday. For the Badgers (5-11), it was their first conference win after starting 0-4.

It was the Gophers’ third loss in a row, and it dropped them to 0-5 on the road this season. And the pain, again, was largely self-inflicted. They turned the ball over 19 times, and the Badgers turned those into 27 points.

“It was one of the first things we talked about as a staff,” coach Lindsay Whalen said. “We turned it over six times in the fourth. That led to runouts for them, too many empty possessions for us. We have to keep working and learning from some of these tough finishes.”

The game featured 17 lead changes, eight ties and a seismic shift in momentum in the third-quarter.

Down 14 midway through the third, the Gophers went on a 18-4 run to tie the score entering the fourth.

The game was tied at 75-75 when Borowicz scored to put the Gophers up two.

But that was it.

“They didn’t do anything that we couldn’t handle,” Borowicz said of the Badgers’ stretch run. “We beat ourselves. We didn’t make shots. We weren’t crisp on offense or defense. We didn’t execute.”

Just seconds after Borowicz scored, Julie Pospisilova drove untouched for a score to tie the game.

After a missed Gophers shot, Avery LaBarbera hit a three from the top of the key to put the Badgers up three with 1:51 left.

The Gophers had three more possessions. Twice they had their shots blocked, once they turned the ball over.

For the second time in as many games, the Gophers — who have generally been at their best in the fourth quarter — came up short down the stretch.

“I feel like our momentum should have carried into the fourth,” said Borowicz, who added that perhaps Wisconsin wanted it more.

“We talked about that,” she said. “We have to want it more. We have a chip on our shoulders. We want to prove stuff to people. We can’t do that if we don’t play better.”

For the Gophers, Amaya Battle had 17 points, eight rebounds and four assists. Borowicz had 17 points, Rose Micheaux had 13 and Mallory Heyer had her second consecutive double-double with 13 points and 14 rebounds, giving her 28 points and 26 rebounds in two games this week.

But the Gophers went 1-for-12 on three-pointers in the second half and shot just 5-for-16 in the fourth quarter.

“This is a tough one,” Whalen said. “Give Wisconsin credit. But it’s a tough one for us, no question.”

The Star Tribune did not send the writer of this article to the game. This was written using a broadcast, interviews and other material. The Associated Press contributed to this report.