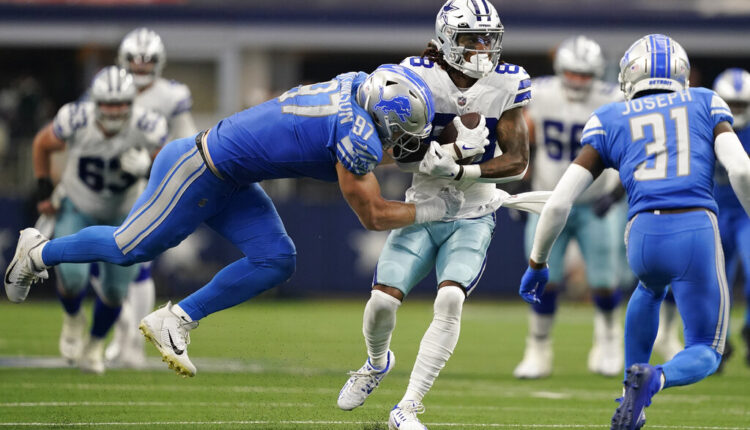 On Sunday, Rashan Gary and Aidan Hutchinson will be on the same field for the first time since 2018.

Gary, now with the Green Bay Packers, and Hutchinson, in his first season with the Detroit Lions, were teammates with the Michigan Wolverines for that lone season in ’18.

Hutchinson was just a freshman at the time, while Gary was a junior and one of the leaders of the Wolverines’ defense.

Now, they’ll line up as “enemies” in the Packers-Lions Week 9 contest at Ford Field.

Hutchinson was very complimentary of Gary when talking about the Green Bay linebacker this week and the time they spent together in Ann Arbor.

“Rashan was a dog,” Hutchinson told reporters. “Every day, watching him in practice and watching him do what he does, it was pretty cool.”

Gary has gone on to become a consistent performer for the Packers.

Gary, when asked about Hutchinson, offered similarly high praise for the Lions rookie.

Detroit Lions defensive end Aidan Hutchinson on the bench during the second half of an NFL football game against the Miami Dolphins, Sunday, Oct. 30, 2022, Detroit. (AP Photo/Lon Horwedel)

“He’s a dog himself, man,” Gary told SI Packer Central writer Bill Huber. “A little hot take: I feel like Michigan’s becoming the new ‘Pass Rusher U.’ A little hot take on that. Man, he’s a great guy, great competitor. You see it on tape. I’ve been watching him since college.”

Hutchinson has experienced his fair share of rookie struggles, but has still managed to showcase glimpses of why Detroit took him at No. 2 overall in the 2022 draft.

In seven games this season, the former Michigan EDGE has recorded 4.5 sacks, three tackles for loss and nine QB hits. His 4.5 sacks paces all Lions defenders.

“Yeah, he’s been having a good season,” Gary said about Hutchinson. “I haven’t seen him much, because I’ve got to focus on what I do. But, he popped up when I was watching Washington (Commanders) film. He popped up a lot in that game, got a couple sacks. He’s a Michigan guy doing great in the league so far.”

“He’s an explosive player, you can definitely see why he was drafted so high, you know, his size, ability,” Armstead said, via Alain Poupart of All Dolphins. “He’s going to be a problem for a long time. hey was a problem His effort. I was impressed. I was impressed.”

According to Packers offensive coordinator Adam Stenavich, Green Bay will be game-planning for Hutchinson on Sunday.

“He’s definitely someone you got to be aware of,” Stenavich said this week. “So, we always have that in our plan, just to be able to help or chip, if we need to be. Yeah, he’s definitely a guy you got to keep an eye on.”

Although Hutchinson leads Detroit in sacks, he hasn’t consistently gotten after the quarterback thus far this year. In fact, those 4.5 sacks happened over the course of just two games. He recorded a career-best three sacks in Week 2 against Washington, and another 1.5 in Week 7 against Dallas.

Stenavich is confident, however, that Hutchinson is going to grow into a solid NFL pass-rusher.

“(He’s a) good player. Very talented. High-motor guy that’s got really good twitch, good strength at the point of attack,” Stenavich said about Hutchinson. “He’s got some really good pass-rush moves, so it’s gonna be interesting to see how he progresses over the years and becomes one of the best — a good pass-rusher in the league.”

This article was produced by the staff at Sports Illustrated/All Lions. For more, visit si.com/nfl/lions.