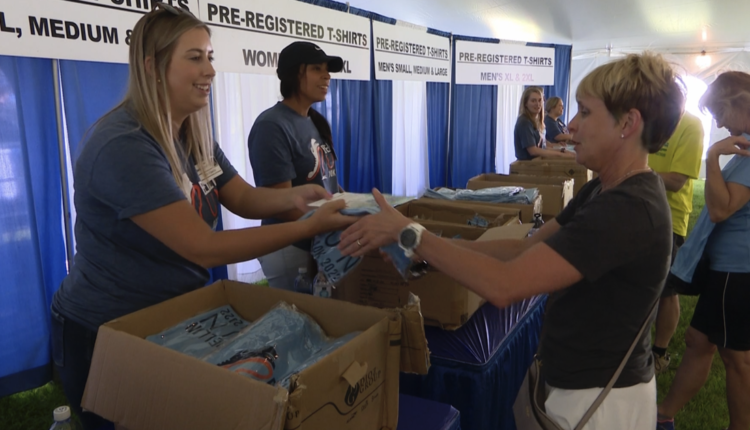 “I love the Bellin, the atmosphere, the people, just the whole idea of ​​the fitness of everybody around,” Walters said.

On Saturday, the six-plus-mile event is back in person after two years done virtually during the pandemic.

“An event that lifts the community,” Executive Director Randy Van Straten said. “We need that more now than ever.”

He says over 7,000 runners are ready to take the course.

“I’m hearing people are most excited for is just a large social event on a beautiful day in a beautiful park here in Green Bay,” Van Straten said.

“We added a PR bell,” he said. “And what that is, it’s a personal record bell. So when people come in, let’s say they run their fastest time or it’s their first one, they set a personal record for themselves. They come in and they ring the bell.”

Participants (like myself) had the opportunity to pick up their bibs prior to Saturday’s big run.

Participants (like myself) had the opportunity to pick up their bibs prior to Saturday’s Bellin Run. The Green Bay 10K is back in person after two virtual years.

I haven’t trained at all, so simply finishing will be a major feat.

“Have your stuff all laid out tonight, so you’re all set to go,” Van Straten said. “Get here about an hour early and then hit the water tent.”

While I get ready for Saturday, I’ve been asking veterans like Walters for advice.

“I like to say ‘good luck’ to everyone out there and I hear it’s going to be your first Bellin,” Walters told me. “I know you’ll be back.”

There will not be a shuttle service this year, and there are some new road closures connected to the race. East Mason will be closed in both directions from Roosevelt Street to Webster Avenue.

Get to know the Racine Zoo’s gay penguin couple