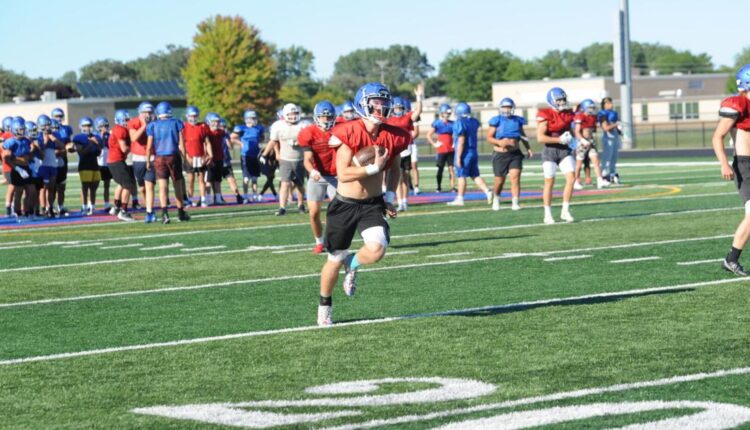 KENOSHA — Hungry for a winner.

What other way is there to describe a Tremper football program that was once vaunted, feared and unstoppable?

The Trojans have won three state championships—granted they occurred in the 1970s and 90s—but they also advanced to nine WIAA postseason from 2000 to 2010.

But that’s where it stops.

Tremper hasn’t advanced to the playoffs since 2010, and the city of Kenosha is more than hungry for a winning season from its “blue” blood, pun intended.

With numbers way up to 106 in the program, including 27 returning letter-winners on varsity, the Trojans have several dangerous playmakers—one year smarter and better—and they’re ready to take the next step in a very tough Southeast Conference that boasts Division 1 state champions Franklin, Oak Creek, Bradford and Racine Horlick, among others.

“I expect us to be improved from last year. Numbers and depth are improved from last year and many returning starters,” Zalokar said last week. “I think this team can be very good. Like I said we have a lot of returning experience and many dangerous athletes out on the edge. A young O’-line will have to gel quickly, but if that happens then I feel our team goals of reaching the playoffs and making some noise in said playoffs is definitely a possibility.”

And the guys on the sidelines see it, too.

At last Thursday’s practice at Ameche Field after Gabe Gonzalez and Carson Nye busted off consecutive 30-yard runs, several players out due to injury were hyping up their teammates with a “this is the year” sort of vibe.

You see, the COVID-19 2020 season threw the program off a bit, as it did with so many teams, and Tremper simply wasn’t ready to recover last year.

But all indications are that 2022 will be the first year in Zalokar’s system where players will start to see all the hard work start to pay off on Friday nights.

The family theme is pouring out of the team’s fabric as well.

Last week, the final practice before Friday’s scrimmage was open to parents, and there was a team kickoff dinner after practice.

Zalokar is a friendly, personable guy who talks to every single player the same way, with care and a positive attitude, no matter if it’s Gonzalez or the kid at the end of the sidelines.

“I thought it went really well,” Zalokar said about Friday’s scrimmage. “There are definitely a lot of details to iron out, but the kids played fast and physical so hopefully that’s a good sign.

Returning to the field Friday nights are quarterback Mason Prozanski, who takes over for graduated Cash Raethke and his 932 passing yards, and big-time playmaker Desz White, a senior receiver and cornerback who led the team in receiving (284 yards) and was second in rushing (346 yards) in 2021.