“I didn’t see this coming!” Vikings fans get engaged while tailgating in Green Bay 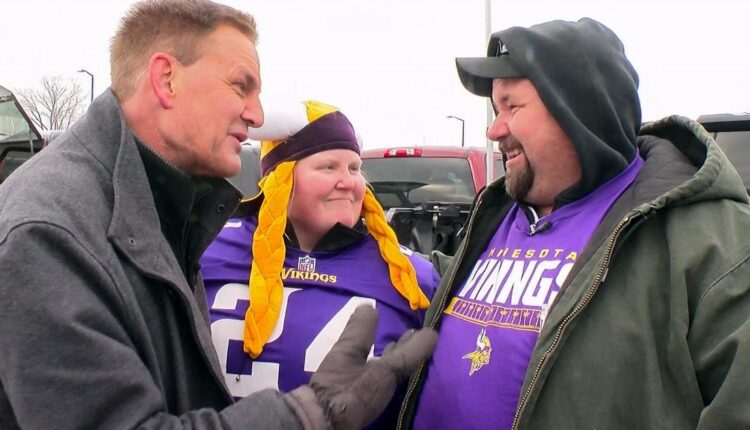 Vikings fans get engaged while tailgating in Green Bay

Vikings fans get engaged while tailgating in Green Bay

GREEN BAY, Wis. – The biggest win we found for the Minnesota Vikings on New Year’s Day in Green Bay came at a tailgate party, where Dave Diethelm stole the show for his girlfriend, Mindy Meierbachtol.

It didn’t surprise anyone when Mindy decided to sing her signature song while tailgating, but she was interrupted by Dave, who gave her a gift: a surprise engagement ring. And Mindy said “yes.”

She has been through a lot the past several months. In June, her father John died suddenly of a heart attack.

“He was so good,” said Mindy’s mom, Katie Meierbachtol. “I try not to cry, but I just wish her dad was here.”

Because Mindy was unapologetically a daddy’s girl.

“He was just full of life, always had some funny jokes to say, some good stories,” Mindy said. “He was a hard-working man, farmed his whole life.”

And so they could only think of what this party would have been like with him.

You could feel his presence, as the Packer and Viking fans united for their friends on an unforgettable day, before the game even kicked off.

Mike Max is sports director at WCCO-TV. Mike returned to WCCO-TV as a sports reporter and anchor in April 2005, having joined WCCO Radio in 1998.

Thanks for reading CBS NEWS.