‘I Was in Kenosha Two Years Ago, Kyle Rittenhouse Is Not a Hero’ 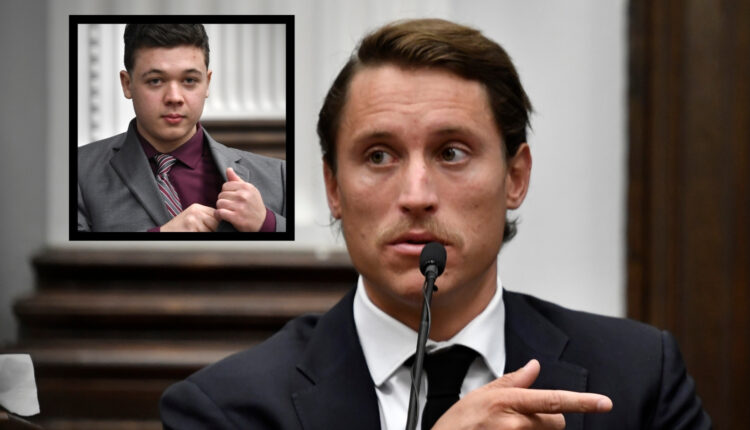 Before the shooting started, at 11:36 pm on August 25, 2020, I ran into Kyle Rittenhouse in front of a gas station and interviewed him for several minutes. He was a 17-year-old kid with a semi-automatic rifle, and he was playing cop surrounded by people who didn’t want him there.

Rittenhouse didn’t see it that way. “So people are getting injured, and our job is to protect this business, and part of my job is also to help people,” he told me. For the third night in a row, half of downtown Kenosha was ablaze. “When there’s someone hurt, I’m running into harm’s way.”

Thirteen minutes later, Rittenhouse, standing feet from me, would kill one man. A few minutes after that, he’d kill another. Then he’d maim a third.

I took off the Black Lives Matter t-shirt I chose that night to blend in with the crowd and used it to stanch the wounds on the first shooting victim: Joseph Rosenbaum. Stumbling across the street carrying Rosenbaum with another man, my hand slipped on slippery sweat and blood and we nearly dropped him as we loaded him into the rear of a nearby Dodge Durango. We had to leave the back door, or tailgate, open to make room for both of us. One of my arms was gripping the backseat headrest so I wouldn’t fall out, and the other was cradling Rosenbaum’s bleeding head and back. 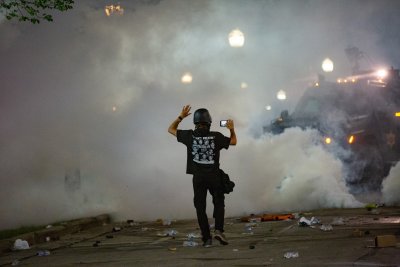 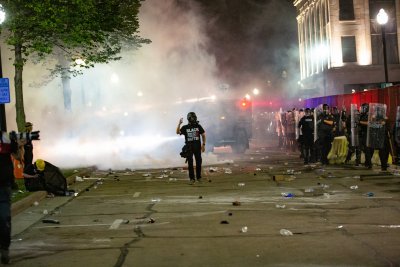 Richie McGinniss pictured in Kenosha on August 25, 2020, around an hour prior to Kyle Rittenhouse fatally shooting two men and wounding another.
@emackeycreates

Protesters kept trying to climb into the SUV. I couldn’t see who was punching me, but the blows kept coming. I kicked someone trying—furiously, crazily—to grab onto the rear bumper as we raced to the hospital.

When we finally got there, we stopped at the bottom of a ramp leading to the ER. I tried not to cry as we waited for the metal security door to open.

“It’s gonna be okay, bro,” I told Rosenbaum. “We’re gonna have a beer after this and laugh about it.” It was hard to hear my voice over the sounds of Rosenbaum struggling to breathe and gargling blood instead.

As we pulled up to the hospital, I watched Gaige Grosskreutz limp through its doors. A police officer held his butchered arm. It was a mangled mass of flesh and bone, not fully amputated, but not quite an arm. I didn’t know it at the time, but Anthony Huber was lying dead on the pavement just outside the hospital.

All three of Kyle Rittenhouse’s victims—Rosenbaum, Huber, Grosskreutz—on a little swatch of concrete draped in flashing lights. All four of them—Rittenhouse and the three men he’d shot—were about to be manufactured by the media machine into caricatures of the people they really were.

Today marks two years since that night. I was there on assignment for The Daily Caller to cover the civil unrest sparked by the shooting of Jacob Blake, a Black man shot by a police officer in the wake of the killing of George Floyd, in Minneapolis.

In the months after the Rittenhouse shooting, most mainstream reporters and producers immortalized Rosenbaum as a Black Lives Matter martyr, even though he’d been caught on camera earlier that day using the n-word. Conservatives called him a “pedo”—he’d been convicted of having sex with a minor, in 2002—who’d had it coming.

Meanwhile, to his detractors, Rittenhouse was a white supremacist vigilante, and, to his lionizers, a hero standing up for law and order. The left ignored the fact that Rittenhouse had come out that day to clean graffiti. Conservatives, champions of family values, didn’t bother to ask why Rittenhouse’s family had allowed him to venture out onto the streets of Kenosha, in the middle of violent demonstrations, in the first place. Nor did they care that he’d lied about being a medic. Nor did they seem to mind that their hero, instead of calling 911, as I’d asked him to do after he shot Rosenbaum, had fled on foot.

These cartoonish characterizations were just that—cartoons designed for the algorithm. Everyone and everything was spun through these partisan lenses without regard to contradiction or nuance.

To give you just one example: soon after the shooting, I went on Fox News’ Tucker Carlson and shared what I’d seen. Soon after that, CNN’s Drew Griffin reported that I’d “supported the conservative claim that Rittenhouse acted in self-defense.” But there was nothing inherently conservative about that claim. It probably didn’t help that I worked for a conservative publication. But Griffin was apparently unaware I’d also worked at MSNBC and Al-Jazeera and in 2020 voted for Kanye West and mushrooms.

I immediately emailed Matt Dornic, CNN’s head of strategic communications, to make it clear I wasn’t toeing any party line and ask for a clarification. Griffin, to his credit, invited me to come on—but, when I did, weeks had passed, and viewers’ perceptions seemed to have hardened into received wisdom: Rittenhouse could not have acted in self-defense. People appeared tied to an ideologically circumscribed understanding of what had happened.

A few months later, during the trial, I was called to testify. I tried to be as impartial as I could. When I was asked by defense attorney Mark Richards whether I’d feared for my life, I said yes. One of the four shots Rittenhouse fired ricocheted off the ground in front of me.

When I was asked by prosecutor Thomas Binger how I could have known Rosenbaum’s intentions, I said, “Well, he said, ‘f*** you,’ and then he reached for the weapon.” Neither answer was ideological. It was just me trying to report as accurately as possible what had happened.

Then, a month after the trial, came Turning Point USA’s “Americafest,” which was streamed on Fox Nation. The organizers invited me to participate. “We would like to surprise the audience with Kyle Rittenhouse coming out in person,” the invitation said. “This will not be announced. Kyle is confirmed.”

I declined. Instead, I watched the segment, “Kenosha On Camera,” from home. Pyrotechnics exploded before a cheering audience of thousands of self-proclaimed young conservatives as the surprise guest took the stage. The panelists joked with Rittenhouse about how good his aim was. I felt sick watching them laugh about the man whom Rittenhouse had shot in a used-car lot. The guy I promised I’d get a beer with right before they loaded him onto a gurney and his terrified, wide eyes turned into a frozen stare. 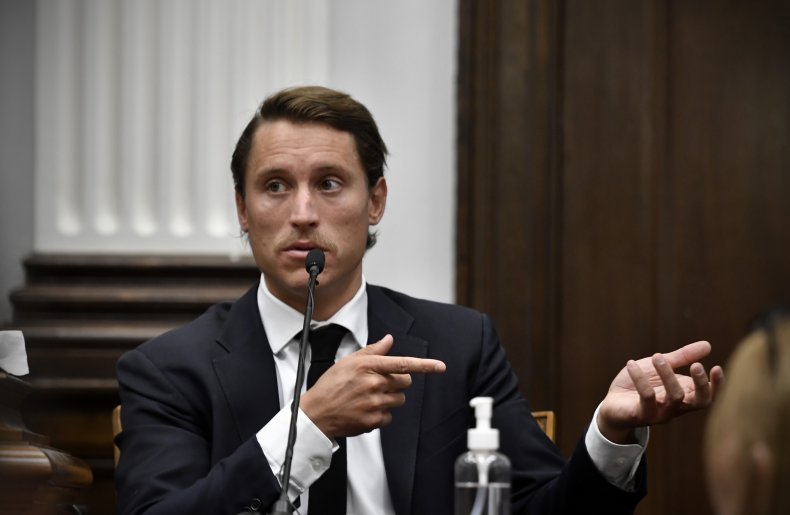 Richard “Richie” McGinniss, chief video director for The Daily Caller, shows how Kyle Rittenhouse was holding his rifle before he shot Joseph Rosenbaum as he gives testimony during Rittenhouse’s trial at the Kenosha County Courthouse on November 4, 2021 in Kenosha, Wisconsin.
Sean Krajacic-Pool/Getty Images

It’s easy to forget what Kenosha once was: A friendly, sleepy town on the banks of Lake Michigan, a little south of Milwaukee, a little north of Chicago. In its glory days, it rivaled Detroit as the nation’s automotive hub. By the summer of 2020, it was a shadow of its former self. Like a silent skeleton of happier lives and better times.

It’s also easy to forget that the violence was part of a national tsunami that was encouraged, if not outright stoked, by media chieftains in Washington and New York. Kyle Rittenhouse was broadly presented as either a force for good or evil. In my view, he was neither.

This was calamitous for Kenosha. And, above all, for Joseph Rosenbaum, Anthony Huber and Gaige Grosskreutz. And, in a way, for Kyle Rittenhouse, who remains confined to his media cartoon forever.

In the summer of 2022, I went back to Kenosha to shoot a documentary about what happened. The goal of the documentary was not that dissimilar to the goal of testing in a courtroom—piecing together the fragments of the recent past with an eye toward understanding.

The engine of my rental car rumbled through the broad boulevards, past the 19th century churches that remind newcomers of the old world, then the pristine courthouse once surrounded by fences and police shields and personnel carriers.

Eventually, I arrived at the scene of the shooting. I tried to retrace my steps. There was no memorial for Rosenbaum or Huber. There was no plaque recalling the chaos. Kenosha, apparently, wanted to forget what had happened. It wanted to go back to the way it had been before the summer of 2020. Before the swarm arrived. Before #kenosha trended. Before it was engulfed by a brief and indelible madness.

Richie McGinniss is a video director based in Washington, DC You can follow him on Twitter @RichieMcGinniss or view more of his work here.

All views expressed in this article are the author’s own.

Madison’s west side gets a new antique store – Isthmus